I got up at 5 this morning, caught a plane from Newark, NJ to Seattle, WA (WG? WN?), and hopped another one to Juneau. Sounds easy, but it took all day. Actually, on paper I was only on planes from 8AM to 2:45PM. Of course, I did go through 4 time zones. So now it's 8:30 here, which makes it the witching hour or whatever as far as my brain is concerned. 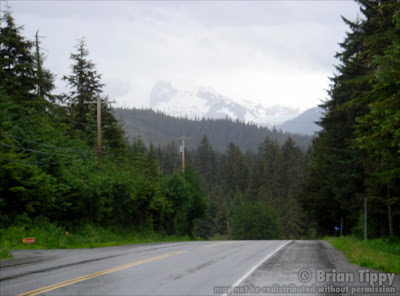 I was promised many strange and exotic birds, but I have yet to see any. Perhaps they have more sense than I and have stayed in for the evening.

I didn't take any more outdoorsy or inspiring pictures because it's really quite rainy and I was busy running around getting my student ID and keys and stuff. It was rather complicated. So far today my temporary keycard didn't work, I had the wrong key to my room, and I had an especially panicky moment when a girl at the ID card center said I wasn't in their system. I was relatively confident that I had a certain right to an ID card and the classes because they had cashed my checks, but you never know what strange laws apply in an exotic place like this. Occam's razor applied in this particular instance and the girl was just wrong. It turns out that, in general, people in Alaska are very helpful and friendly. Helpful in the sense that they seem to really want to help you, but not helpful in the sense that you actually get any help from them.

Oh yes, and now I live in a dorm room. I kid you not. I'll have a roommate, who will presumably arrive tomorrow. 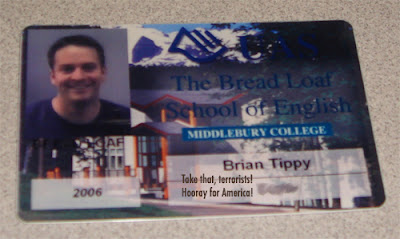 Proof that I actually got an ID card (ID# blotted out to foil identity thieves and terrorists and the like whose nefarious plots will only succeed if they have access to my dining hall privileges...also because it actually contains part of my SS#): 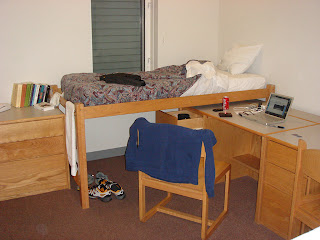 OK...no proof yet because there's no roommate. I have to take his existence on faith, and so do you. God, I'm tired. I'm not sure when I'll post this because the internet has been turning itself on and off. Maybe it's being helpful.