Today we had our first outing for my "Searching for Wildness" class. In addition to readings in North American environmental literature (focused on Alaska), we go on outings to explore the natural and human history of the area. Today's was a bushwhack with Richard Carstensen, a naturalist from the area. We went a ways up a snowmobile trail and then literally struck off through a bog and then the forest on a bear trail. 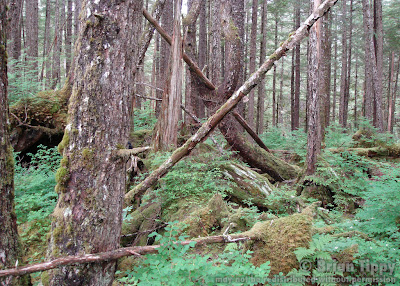 This is the trail. You'll note there is no trail. But if I bear can do it, I can. Upon further reflection, I realize that the rule doesn't actually hold true. There are a number of things a bear can do that I can't, including eating whole bunches of stinkcurrant. Or fighting a bear unarmed and surviving, for that matter. 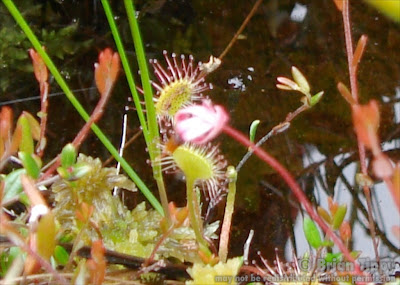 We spent quite a bit of our time in bogs, which are distinguished from fens in that bogs are mostly Sphagnum moss and water that doesn't move much, whereas fens can support sedges and grasses. This is a Drosera rotundifolia, or Round Leaf Sundew, a carnivorous plant that likes the Alaskan bogs. 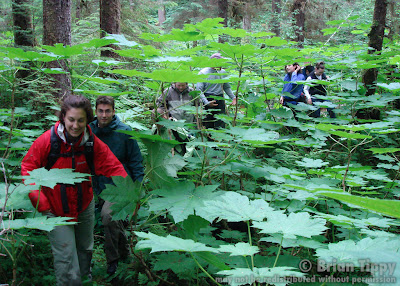 Here you see Elizabeth, Nick, and others gingerly picking their way through a dense thicket of an intensely thorny plant. The white settlers called it Devil's Club, and scientists gave it the intimidating scientific name of Oplopanax horridus. The native name means "don't touch, dumbass." They favor a certain set of spots on the creek banks, so we waded through quite a few here and there. 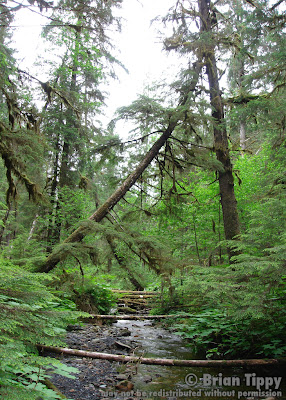 Here's a look up said creek. This area is unique to my experience in that it has never been logged and that it's pretty much a rain forest, so it's an incredibly thick, dense greenery. Fun to bushwhack through, except when you find Devil's Club. 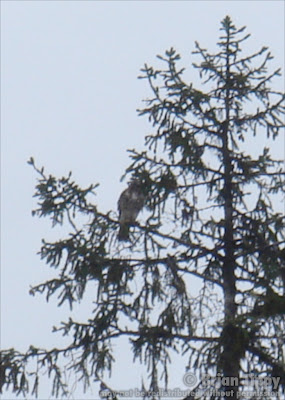 Up a bit higher, in the last bog we went to, we stumbed upon this female Northern Goshawk, who, instead of flying off as this shy species often does, flew to another tree and screamed at us. Richard, the naturalist, speculated that she might have a nest nearby and therefore a vested interest in not escaping. He also pointed out that Goshawks are infamous for attacking even large mammals if they feel the nest is threatened, and he intimated that nobody needs a powerful hawk with unpleasantly sharp talons barrelling in at his face at Mach 2. So I backed off a bit. 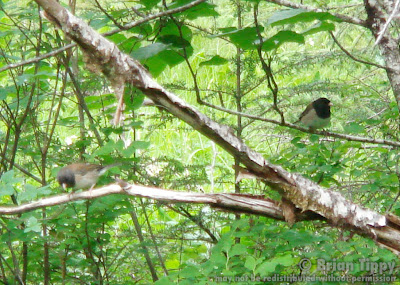 Juncos are a safer bet. 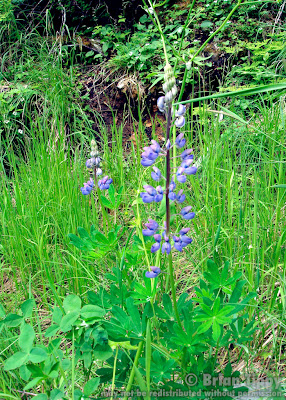 Flowers are even safer. Right: lupine. 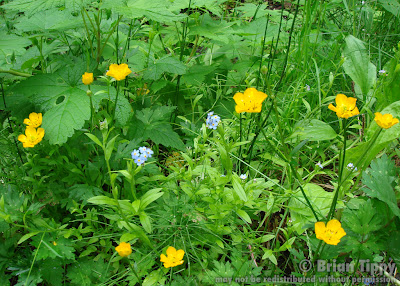 Right: buttercups and forget-me-nots. They line most of the drainage ditches and roadways. These are beside the snowmobile trail.
Posted by Brian at 8:00 AM