Nothing actually that exciting about the first class. I'm taking "Shakespeare: Page to Stage," which is essentially a Shakespeare and Performance class. The guy teaching it is an actor/director, not a literary academic, so it should be a nice change of pace from the other million Shakespeare classes I've taken. More on that later. 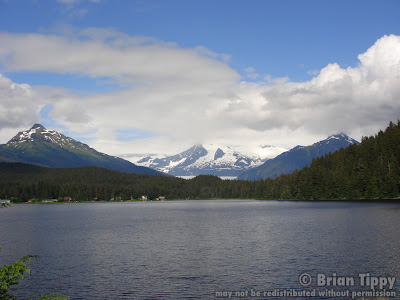 The sun actually did come out for quite a long spell yesterday afternoon, and I snapped a couple of pictures that didn't make it into yesterday's entry. This is that same look out onto Auke Lake and Mendenhall Glacier. Don't ask me the names of the mountains. 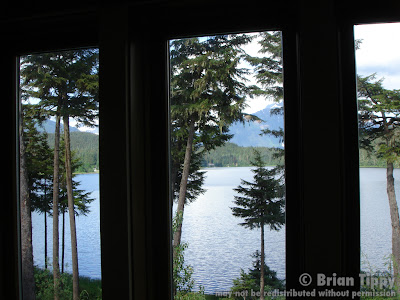 The dining facility looks out over Auke Lake—the whole wall is windows like this. Kinda nice.

After class, I went to the library for a while, but was rather exhausted still from last night's escapades and went home for a quick nap. Unfortunately, I slept through dinner. There is, however, a wafflehouse (waffelhaüs?) in Juneau, so I managed to grab a bite to eat. On the plus side, the waffle house looks out over Auke Bay, and I got to watch Bald Eagles circle around as I ate the waffle.

Now it's 10:30 and it's finally getting dark and we're all sitting around reading and working. Everybody here, students, faculty, and administrative staff are really sweet so far, and the students seem pretty sharp and well read in general. I'm in the commons with 3 other guys and we're all working away, but we took a brief break to debate the relative merits of different translations of the opening lines of the Odyssey. Another class tomorrow, some sea kayaking on the horizon, maybe a trip to downtown Juneau and a bike rental.