Hike to a Glacier

I didn't think I could come up with a better way to open this entry than with a picture, but that isn't even the coolest one. This morning, I hiked out to Mendenhall Glacier with some folks. That's the view from the glacial lake (on the right), over to the end of the glacier (that light gray river on the left).

But before we even got in cars to drive to the trailhead, as we were all standing out front of the dorm, I saw my first Chestnut-backed Chickadees frolicking on the roof and in the air between the dorm and the trees. Then I saw my first Merlin come flying over the walkway and pluck one out of the air. (Ed. note: the play has been reviewed and the bird in question was a Sharp-shinned Hawk. The presence of distinctive bands on the tail, which are not consistent with the Pacific northwest plumage of the Merlin, as well as the wing shape, especially in the final approach to the prey, were more typical of the Sharp-shinned). 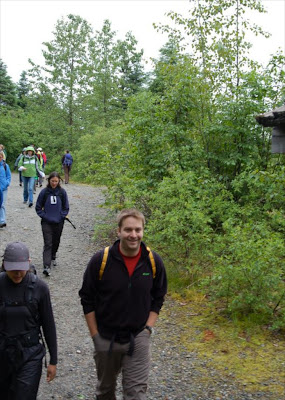 There were actually 22 of us who went on this hike. That's me at the trailhead. 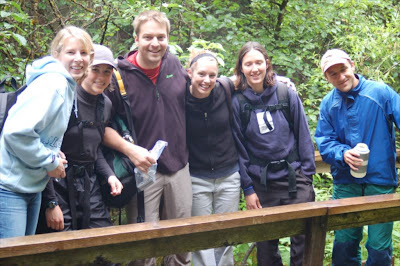 A few of us stopped on one of the bridges for a quick photo. From the left it's Katie, Heather, me, Amanda, Jen, and Sam. Heather and Jen aren't in Bread Loaf with us, but they were good hiking companions. 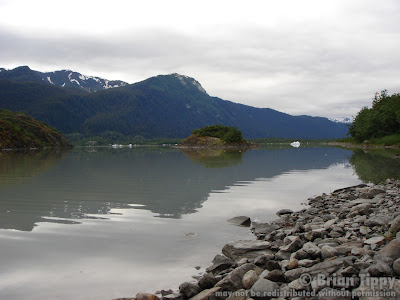 This is the very bottom end of the glacial lake. Yes, those are ice floes you see in the distance. The water is gray because there's incredibly fine, pulverized rock in it. It's also just barely above freezing.

The glacier is to the left and way up the lake. 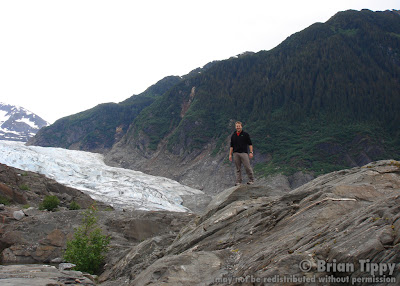 The real treat, clearly, is the glacier itself, which comes down out of the mountain as a river of ice. 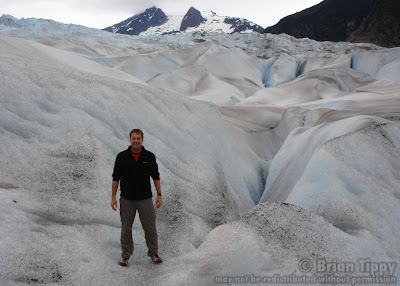 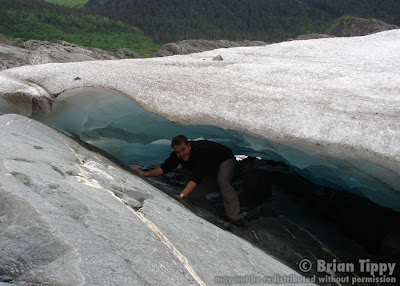 ...and under the glacier. 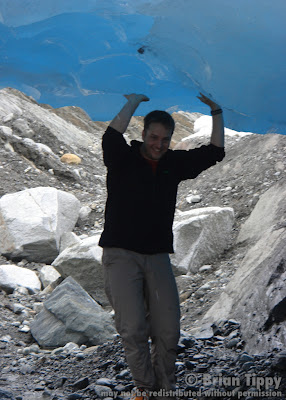 This is the requisite "I'm holding up the glacier" shot. Frankly, I don't look convincing. I am, in fact, under the glacier, though. Imagine being under one of those giant rocks that looks precariously perched but has, in actuality, been standing there for thousands of years. You know how that's at least a little scary? Now imagine doing it under a glacier that routinely drops giant chunks off the sides.

At some point in this, I also ate a piece off the glacier. Glacier tastes a little like gravel, just so you know. Apparently the powdered rock in it isn't bad for you, but I didn't go to town, just in case. 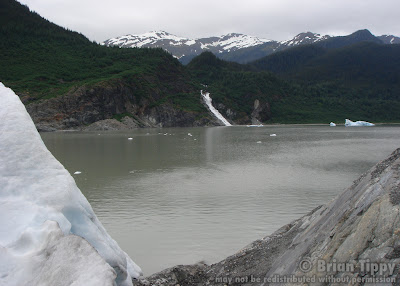 This is a view of the waterfall across the lake. Glacier on left, glacier-carved rock on the right. 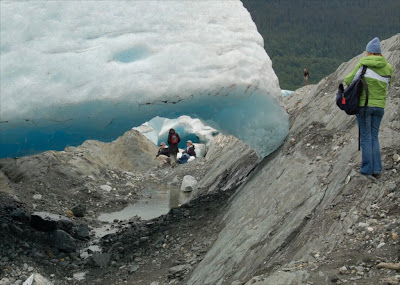 Here's what I was pretending to hold up...a little scary. 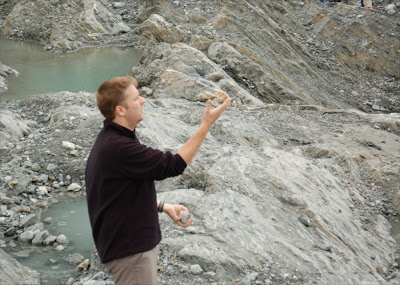 And Cody caught me juggling rocks...

The original post contained a panorama of my pictures that my mom had made in Photoshop. For the updated entry, though, I remade the panoramas, since the software now automates the process and does a far, far better job than we were able to.