This morning I caught a 10AM bus with some friends, and we went downtown again. We hit some touristy shops, the outdoor outfitters (where I filled out some weaknesses in my outdoor gear and equipment) and a really neat used bookstore, ate mexican food (totally decent!), and came back. Then it was time for a picnic down at the Auke Bay. 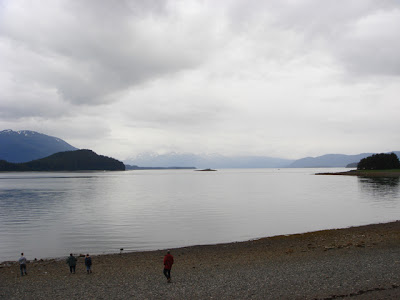 The rain held off for most of the picnic, and it was quite a setting for hamburgers and hotdogs off the firepit. The sense of community here is huge; practically every student and even a significant number of professors came out to enjoy the scenery and the food for a couple of hours. 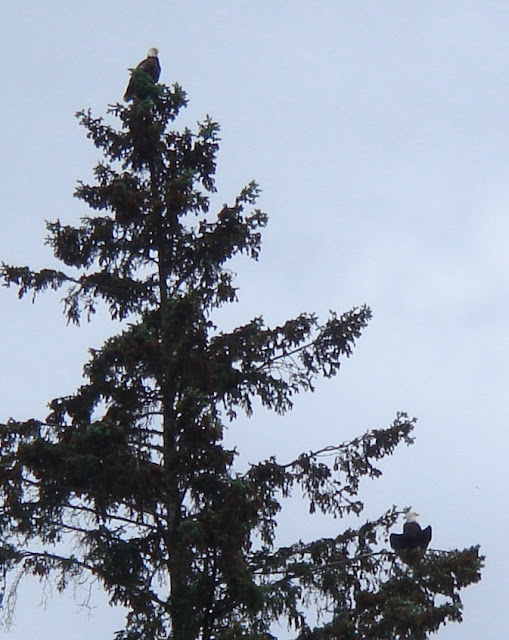 Two Bald Eagles perched over the picnic (if you're standing taking the previous picture of the beach, they're to your left and behind you). They hung out for a while, but did not take the opportunity to fish while I was there. They flew out over the bay once or twice, but the crows, who seem to have strong opinions on the subject of eagles, wouldn't leave them alone. 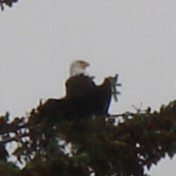 Here's a couple of different crops from other pictures. Not so bad for a little camera with a 3x zoom, eh? You can definitely tell they're eagles. I've seen a Bald Eagle or two every day, but they were such a wonderful and rare sight in all the camping that I did back in New England that I still get really pumped up when I see one. I assume the day will come where I'll stop being excited about eagles, but it won't be tomorrow. The first eagle is doing a pretty good impression of the presidential seal, don't you think? 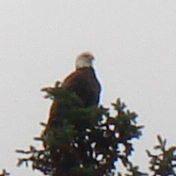