I woke up at 6:50, local time this morning and went for a run around campus. There's a nice loop of about 3 miles that runs down from the student housing, around towards the bay, and back through the classroom buildings. My housing is up on a hill, which makes the end a bit brutal, but it was fun anyway. 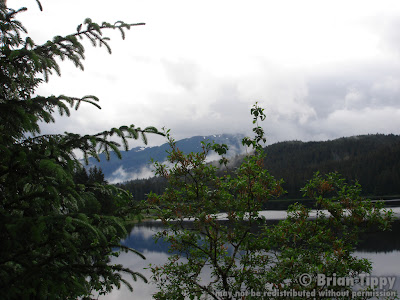 Right downhill from the dorms is Auke Lake, which is glacier fed and therefore probably quite cold. It's about 60 degrees in the air, so it certainly looks inviting to swim, but I imagine the water is in the 30s somewhere.

Moist air comes off the ocean and gets pushed up the mountains, so the water in the air condenses into clouds. That's what makes the climate here so damp and rainforest-esque. That also means there are basically clouds sitting on the mountains most of the time. You get enigmatic and frustrating glimpses of the mountains, which are, frankly, inspiring. The clouds give the whole thing an exotic and mysterious feel.

This is the view from the road by Auke Lake.

I finally saw two birds we don't get out east. There were a male and a female Varied Thrush, who were too skittish for me to take a picture of (a 3x zoom just doesn't allow you to get birds very well), and a Dark-eyed Junco (Oregon morph), of whom I only got a tiny snapshot. The picture doesn't prove what he is, but I did get a good look at him before he went into the underbrush. 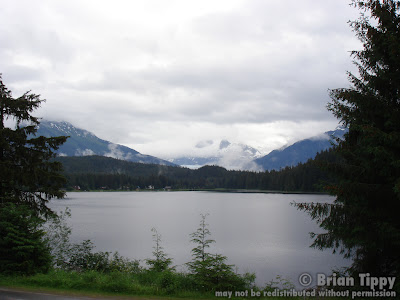 This is the view from the main driveway into campus. You're looking out across Auke lake. The tiny blue-gray spot in the center of the photos, in between the mountains is a glacier. I think it's Mendenhall glacier, but I'm not actually sure, since there are two major glaciers here. 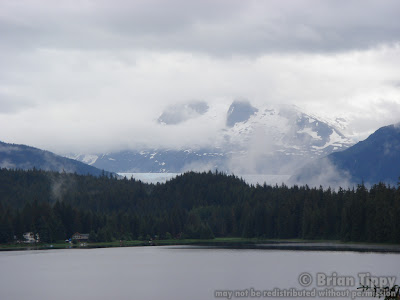 Closer crop of the view from the driveway - the glacier's much more visible here. 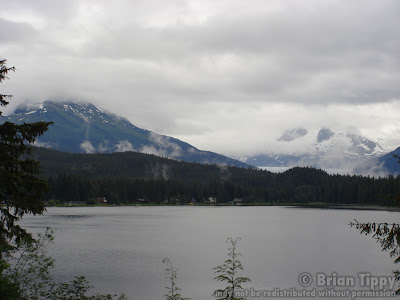 Same view, different angle. See what I mean when I say the clouds are both frustrating and beautiful? 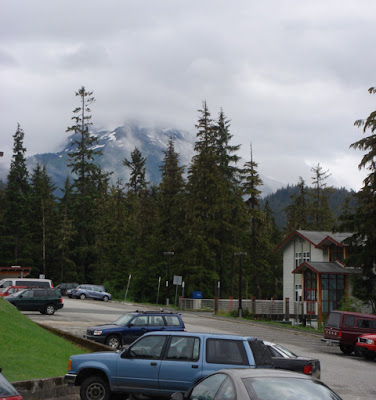 This is the view from the parking lot of the student housing. That's my dorm on the right. 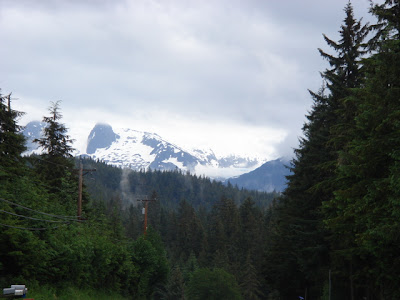 This is another shot from the road below the dorms. It's less rainy than yesterday and you can get a better idea of the snow-capped peaks rising into the clouds. 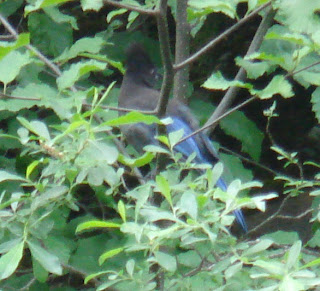 The sun broke through for a little bit this AM, but not long enough for me to get any pictures...it was actually just a big hole in the cloud cover that went directly over for a while. Just as the sun was going away again, I caught a quick picture of this Steller's Jay. 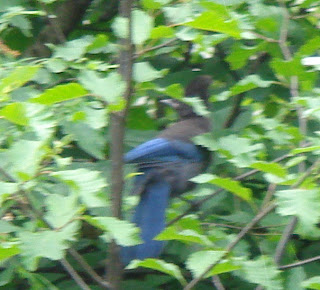 There was a big welcome meeting at around 5PM at which the administrators and faculty introduced themselves. It seems to be the thing here to tell visitors grisly (their pun, not mine) stories about bear attacks. Comments like "no maulings yet this season" and "don't poke the bears" abounded. Then dinner, then a little reception, after which a bunch of us headed out to the local bar, which was just chock-full of local color. I didn't take any photos because I figured the comment about not poking bears applied to the locals too. A bald eagle flew across the bar parking lot as we arrived (remember, it's full daylight at 9PM). By the time the bar closed at 1AM, it was practically dark out. The sun sets around 10:15, but it stays dusky for a long time after that. We rather brightly decided that striking out through the forest in order to cut the corner of the road was a good idea, so we were a bit bewildered and muddy by the time we got home.