The Sun's Not Out, But the Eagles Are


I never thought I'd be blasé about bald eagles, but they're honestly the second easiest bird to find around here. They wheel over the bay all day, presumably fishing, though I haven't seen one drop to the water yet. I may go hang out down at the docks when it's nicer out and try to get at least a decent picture of one.

My alarm clock is my cell phone which, thanks to Jeremy, wakes me up with a few bars of "Feels So Good." I was thinking about using something from Rebirth, but that seemed a little too brash to count as courteous to the roommate. Speaking of which, he did get here and is a nice guy. However, a couple of guys apparently chickened out, and there's now enough space on the guys' floor that we can each have our own bedrooms, so he'll be departing today sometime for a room down the hall. That means that the next time one of you forgets the 4 hour time difference, you'll only be waking me up. 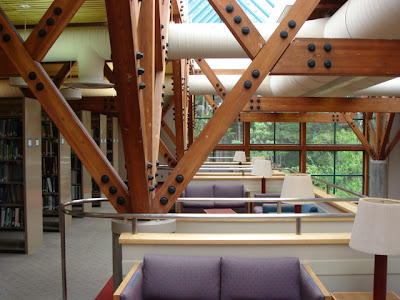 The library's kind of a neat building. This is the view from my current favorite study spot. I sat here cranking out some reading after my first class of "Searching for Wildness." There's a ton of reading for that class, but I am so unbelievably excited that I'm taking it right now. Basically, every week, we're exploring some aspect of Juneau's natural or human landscape or history. The idea of wildness isn't limited to just wilderness in the sense of untouched places; it encompasses concepts of living in harmony with the natural world just as much as it deals with the challenges of unforgiving terrain.

Anyway, much work was done, then dinner, then we took a bus to Juneau to grab a few drinks at a bar called The Alaskan. It was actually a prospectors' bar during the 19th century gold rush, and they certainly have kept the vibe as intact as possible. Think: old west meets the pacific. We took a rather harrowing cab ride back to the university and caught some well earned sleep.