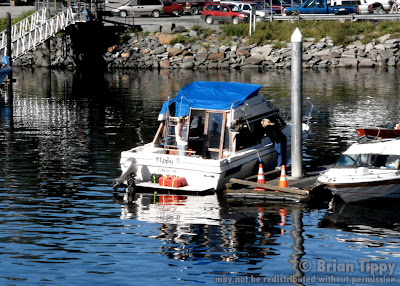 The end of the Bread Loaf Juneau season includes a chartered boat ride out of Auke Bay and up the channel. The idea is to have dinner and drinks, celebrate whoever is graduating, and see some marine life.

But before we get started, I am compelled to point out one of the boats that was in the harbor with us as we were getting ready to leave. 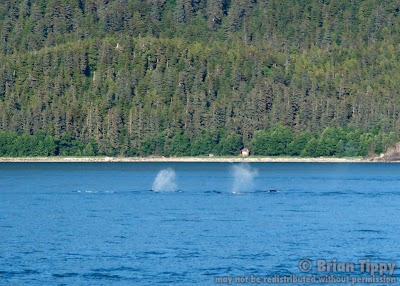 Of course, concerns of food and revelry took a quick second seat when we found our first group of Humpback Whales. First, we found a group of three or so, who very nicely obliged us by surfacing and spouting on and off for quite a while. 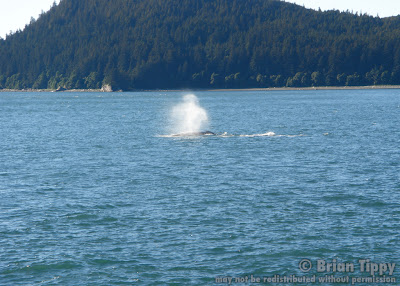 Humpbacks have a double blowhole, like a pair of nostrils, so the spouts are actually two jets of spray. You usually can't see that very easily, but it's almost visible in this picture. 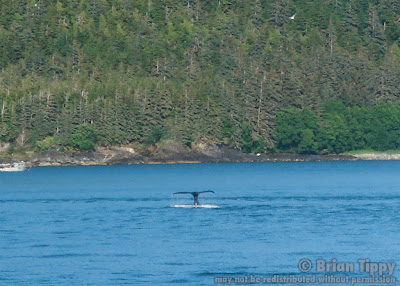 Then, of course, it was time to find some whales who wanted to show off their tails.

It's worth pointing out that we've had about nine or ten days of unremitting rain and overcast skies. Then, on the day of the big boat trip, the sun blazes, the temperature climbs to 72, and there isn't a cloud in the sky. Not so bad. 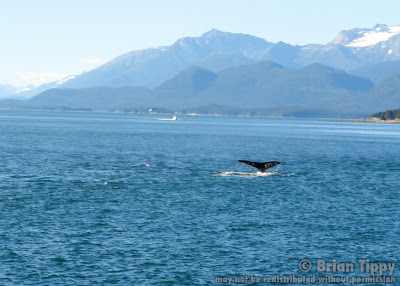 We found a couple of groups who were willing to show off. 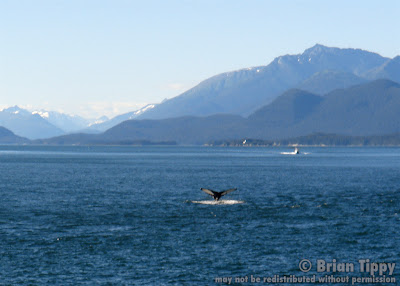 While I'm wary of personifying whales, they seemed to have a knack for flipping their tails in front of nice scenery.

Every time a whale's body broke the water in the characteristic slide that preceded a tail flip, the whole boat full of people began to "oooo." When the tail flipped up and over, the whole boat cheered. It was an immense experience. 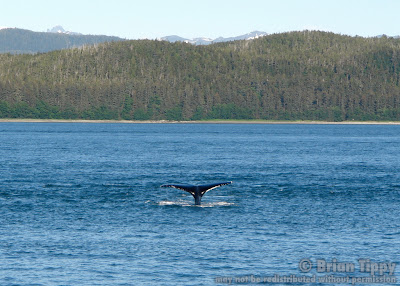 I swear: this is the last tail picture. This whale came at the boat and ended up quite close before this final dive.

It's also worth mentioning at this point that Humpies are baleen whales; they feed by sucking an immense amount of water into their mouths and then straining out fish or krill.

They typically come up under a school of fish or grouping of krill and fill their mouths as they come flying up through the water. This behavior is called "lunging." 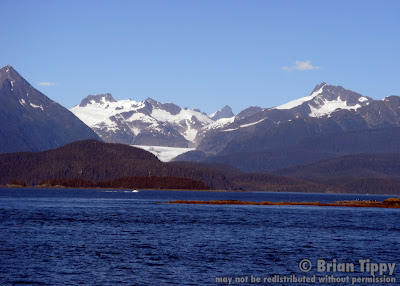 John Muir, the turn-of-the-centry glaciologist and naturalist I quoted in my 7/2 entry, would have my head if I raved only about whales and didn't put any glaciers in my journal. Here's a particularly glorious glacier. Happy, John? 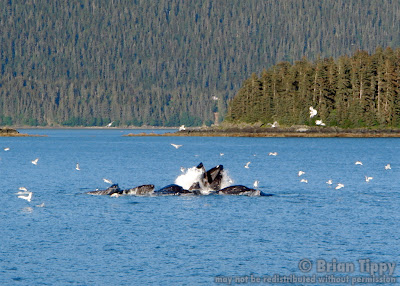 We were also privileged to see a fascinating feeding behavior called "bubble net fishing," in which a group of Humpies swim around in circles below a large school of fish. They exhale air from their blowholes and create a wall of aerated water the fish see as a barrier. Thus, they concentrate their prey into one column and all lunge up through the school at the same time.

As many as a dozen whales can team up in this fashion; here we had about five, I think. In this photo, they're just finishing the lunge. 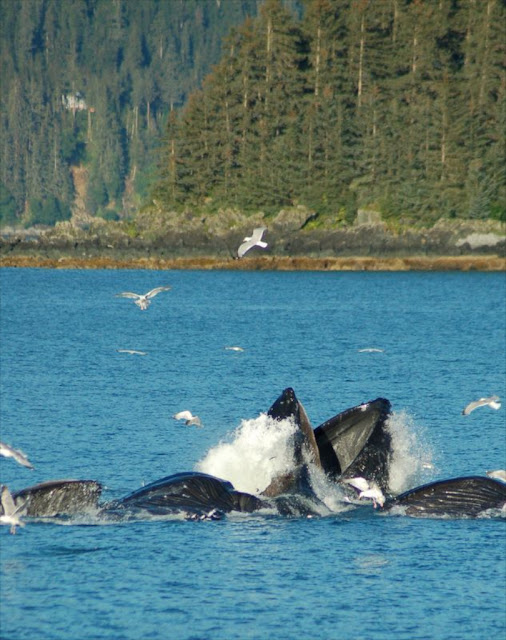 I thought the cheering for the tail flips was boisterous, but the three rounds of bubble net fishing we saw brought such breathless anticipation as the gulls circled the area they knew was about to be boiling with terrified fish, and when five giant whales subsequently broke the water, they got a round of cheers.

Cody caught the same bubble net lunge at almost exactly the same moment. This is a different picture taken with a different camera; we just managed to click the shutter at almost the same instant.

Cody, you'll notice, has the superior lens. You'll also notice that he clicked a fraction of a second earlier than I did; the seagull that's almost directly over the highest whale's jaw here is just a hair further along in my picture.

There were people on the boat and great conversation; there was great food. But let's face it: the whales win.
Posted by Brian at 7:00 PM