Glaciers and Kayaks (but not together) 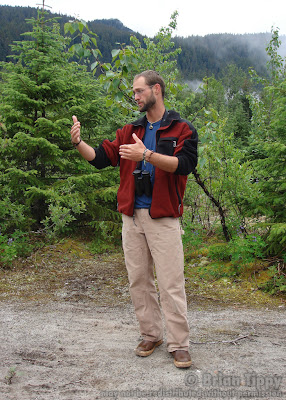 This is Matt Brooks. He's a naturalist, glaciologist, and avid birder. I'm not sure if he has degrees in all three, but I wouldn't be surprised, since he certainly knows his stuff. He took our Wildness class on a walk below Mendenhall glacier in order to talk about the role of post-glacial succession in habitat formation.

As a glacier withdraws, it leaves behind it different kinds of ground: bare rock, moraine (gravel and sediment), etc. Different mosses and lichens make a home there, and then larger shrubs and trees. Mendenhall glacier has been withdrawing steadily for quite a while, so the area below it has a textbook array of different kinds of forest.

Matt's main interest and expertise was birds, but after the first week or so of July in southeast Alaska, the birds are finished marking out territories and finding mates, and they've gotten down to the business of raising babies, so there aren't so many kicking around, and practically nobody's calling.

We were, however, able to see a large number of Artic Terns, which spend their summers nesting at the base of the glacier. We even got to see a few of them mob a Bald Eagle. We also got to hear Hermit Thrushes, Chickadees, and caught a good look at a Yellow-rumped Warbler. 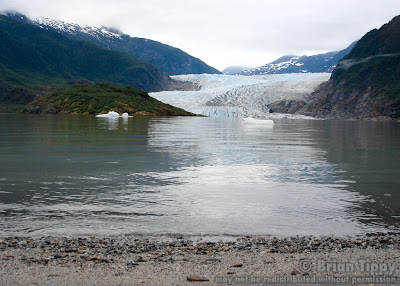 This is the same glacier I visited in my 6/24 entry, but this picture is taken from the other side of the lake.

According to Matt, we're probably already in an age of glacial recession, so it's almost certainly not due to global warming alone that this glacier is shrinking. However, the last twenty or so years have been, overall, much warmer, so the glacier's receding much faster than normal.

As Matt points out, he's a federal employee, so if he can state unequivocally that global warming is an issue, no matter what the political leanings of the federal administration, it seems obvious that it's happening. The question now is what the negative effects might be and how we should address them. 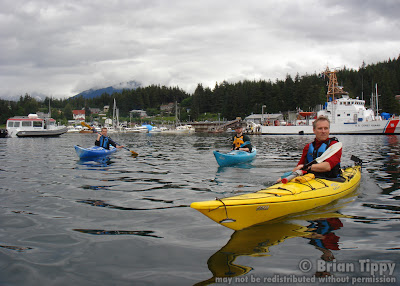 This morning I went kayaking with (from the left), Sam, Palmer, and Mark. We rented boats from the Rec center, and, with one person at the front of a pair of boats and one at the back, we went down to the water. We went a slightly shorter way than I did last time (since we didn't have to be wheel friendly), but it still wasn't the easiest of walks.

Once we were on the water though, we slipped easily through the calm harbor waters and south, away from Auke Bay. 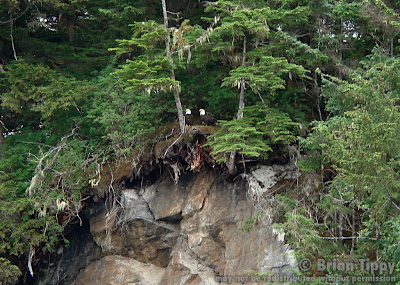 We circumnavigated a small island, and since at least a couple of the five species of salmon are now running fiercely, the eagles are everywhere. This pair was sharing a fish and warding off the crows who were trying to steal it.

Salmon lept out of the water several times a minute, so far and so high that you could literally tell the species as they hung in the air. I spotted Silver and King Salmon. 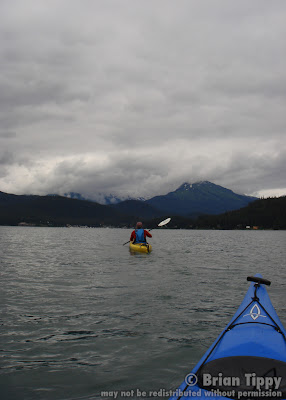 After we rounded the island, we turned back towards town and home. That's Mt. McGuinness you see just to the right of Mark. I'm hoping to hike up it on the next clear day.

On the way back, I spooked a flock of Pigeon Guillemot, who took off with some noisy clapping against the water, and a cute little Marbled Murrelet popped up about two feet off the port bow, looked extremely surprised, and went straight back down. 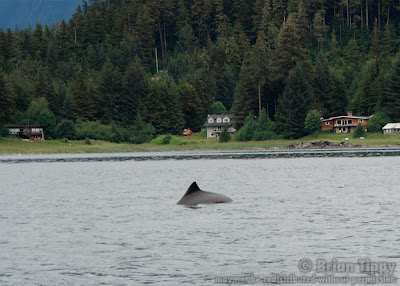 On our way back, we noticed the backs of a pair of Harbor Porpoises breaking the water. We caught a quick glimpse and counted ourselves lucky, but they took an interest in us and spent almost 10 minutes circling the boats underwater, coming up to breathe once in a while. I got lucky and caught this one about twenty feet away.

Though the fin may remind you of a dolphin, these guys are from a different Family entirely. In fact, Killer Whales are more closely related to dolphins than porpoises are.

They lost interest about the same time we did, and they continued on their way right as we did. I'm not sure what to make of the fact that I have exactly the same attention span as a porpoise. 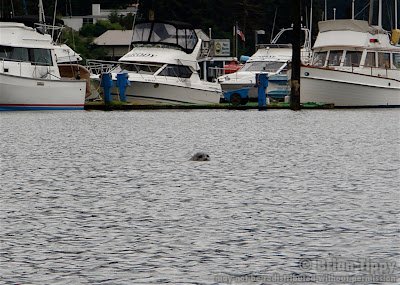 The last member of the wildlife crew who deigned to be so easily photographed was one of about eight Harbor Seals whom we displaced because they were relaxing in the shallows where we took out our kayaks.

They lazily drifted away, popping up like adorable periscopes from time to time to check us out.