The last few days have been hectic. First, on Monday, 7/3, I was able to get down to the rec center and take the kayaking "orientation," which literally consisted of less than a minute's description by a pimply youngster along the lines of "this is a life jacket and this is a paddle." Then they gave me a sea kayak and a pair of wheels to turn it into a rudimentary rickshaw, which is an absolutely easy and wonderful way to transport a 16-foot, 60 pound boat, providing that you don't have to go through the doors out of the rec center, go on or off a curb, turn, or travel up even the gentlest of inclines. Still, I made it to the bay without much more than a separated shoulder and climbed into the boat, strapping the rickshaw to the back deck in what I'm sure struck passing boaters as an elegant arrangment. 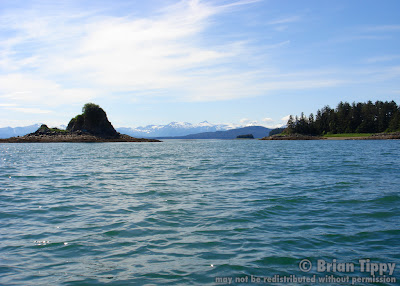 It was, of course, worth the hassle and more, since this was the view that awaited me once I cleared the docks and paddled about a mile out toward the end of the harbor. I ended up rounding the small island you see on the left there and heading back, since I had class to get to. An eagle paced me part of the way (we were both headed into a stiff breeze), and the salmon, who jumped a good 5 feet out of the water at times, made me constantly afraid that an Orca would follow and carelessly swamp me. I even had the small but significant fear that a killer whale might suddenly decide that kayak+human amounted to a delicious crunchy shell with a creamy nougat center. Sort of the deep sea's equivalent of an enormous, blue M&M. Melts in your giant, toothy whale-mouth, not in your flipper. 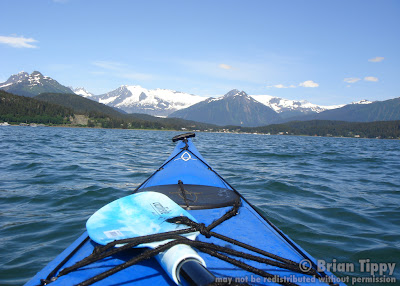 As you may have guessed, I wasn't eaten. In fact, it's worth mentioning that there are no recorded instances of wild Orcas attacking even swimmers, much less kayaks.

This is the view back toward the Auke Bay docks, a 180 degree reversal from the last picture. Yes, I thoroughly endangered the camera. No, I didn't ruin it. You'll also notice that the snow-capped mountain just to the left of the bow is the same one you can see in the pictures across Auke Lake.

The rickshaw-pull back uphill was definitely the highlight of the kayaking expedition; I got sweaty and sore to my heart's content. And the most dangerous wildlife was the national guardsman who almost ran over me and my giant blue candy shell with his Mazda.

The evening of that same day found me enjoying Juneau's 12:01AM fireworks display. They take their July 4th seriously here, since Juneau started as a mining town, and miners only got off Christmas and July 4th every year. We watched the fireworks from the deck of the Hangar, a local watering hole, and then went out for some revelry, experiencing once again the truth of John McPhee's adage, "If you order a glass of beer in Alaska, it is likely to be modest in all ways but cost..." (Coming into the Country 153). We ended the night with an order of Russian dumplings (Pelmeni) at the Russian dumpling shop (creatively named "Pelmeni"). The dumplings, while delicious, seem to benefit greatly from a side of revelry. To the sober fellow, midday, they would probably seem modest in all ways, including cost. I spent much of the 4th itself recuperating and reading the remainder of John Muir's Travels in Alaska.

It's Wednesday the 5th now, and all I've done today is go to class and do homework, so I've taken a break to write this entry. Tonight, a lecture by Richard Carstensen, the leader of our bushwhack, co-author of a field guide, and a local advocate for forest preservation. Then, more homework, because this weekend won't leave much time for work. We're going on a 3-day trip for the Wildness class, which promises to be fascinating. Obviously, pictures and stories will abound on my return, but I doubt I'll be reporting again before Sunday, 7/9, which is our scheduled arrival back here. Fear not; I have befriended the bears and they will allow me safe passage to and from Haines. Probably.