"...summer days so white and full of subdued lustre."


The sun came out, and it's not kidding around. For the first time in the nearly two weeks I've been here, the clouds completely retreated and the sun has shone unabashedly all day. I was also lucky enough to be reading John Muir's Travels in Alaska out in the sun, and he describes the Alaskan summer climate in a way that truly captures what it's like to be here.


The most remarkable characteristic of this summer weather, even the brightest of it, is the velvet softness of the atmosphere...The clearest of Alaskan air is always appreciably substantial, so much so that it would seem as if one might test its quality by rubbing it between the thumb and finger. I never before saw summer days so white and full of subdued lustre. (Muir 35)

Muir definitely has a handle on the feeling caused by the heavy, moist air, cool enough not to feel humid, but warmed by the sun into a deliciously comforting, airy blanket. And, of course, if it gets too hot while you're out studying on the dock, you can always stick your feet into the glacier-fed waters of Auke Lake. 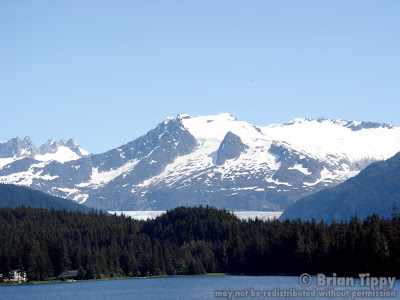 Once again, the view across Auke Lake, this time without a single cloud to obscure one iota of the craggy peaks in the far distance. The giant scale of the mountains can make them look closer than they are, but the telltale haze of the Alaskan climate should help you realize both how huge and how far away that mountain is. The glacier you see "just behind" the trees in the middle of the pictures is about 6 miles off, but even when you're standing on the glacier, the mountain still looks just as distant and hazy. 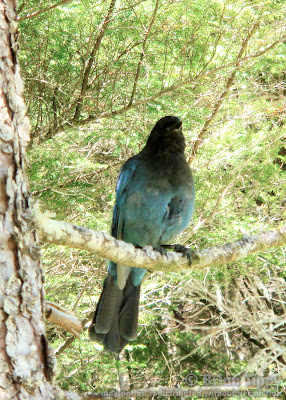 Today provided some nice lighting for pictures, so on the left is a closeup of a Steller's Jay. This one is a little bit scruffy and dirty because he was preening when I photographed him, but he did let me walk practically up to him for the photo, so you can't blame him. 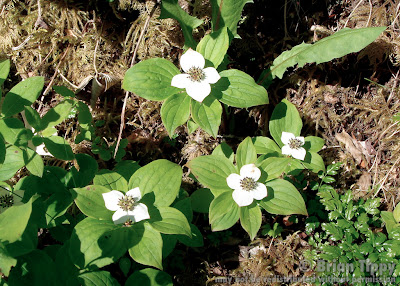 Below is Cornus canadensis, the Bunchberry or Ground Dogwood. 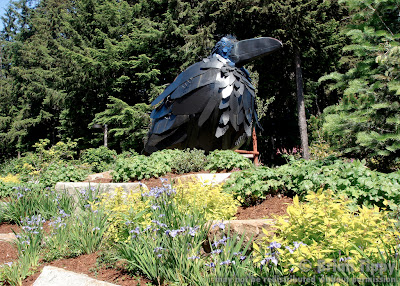 I don't believe I've mentioned the giant raven sculpture in front of the library. Well, there you go, a giant raven.


This is where I read and wrote for a couple of hours today. Despite the brightness of the day, the northern sun, filtered as it is through the heavier air, just doesn't hammer on the skin and the eyes the way the summer sun of more southern climes might. Sunglasses were nice to have, but sunblock was unnecessary (though I don't burn very easily anyway). 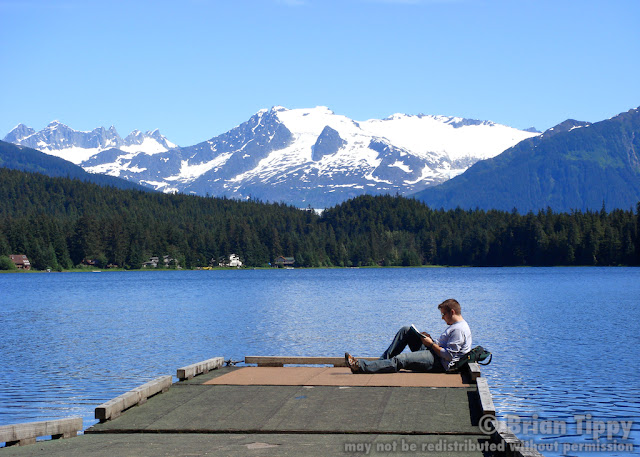