Over the weekend, my "Searching for Wildness" course went up to Haines, AK and the surrounding area to immerse ourselves in a wilder part of Alaska and to get a chance to experience some aspects of the culture of people who existed there long before any European explorers "discovered" the place. We left the Auke Bay ferry terminal at 8AM and crossed, incidentally, the line of my kayak outing from the other day before leaving Auke Bay and heading north. 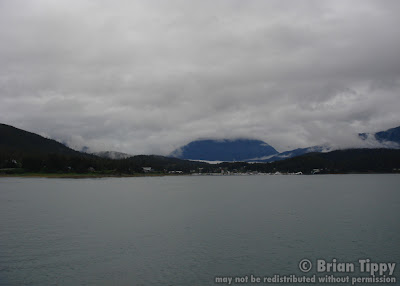 Most of my pictures from the trip are from the ferry's back deck. It was one of the new "Fairweather" class of ferries that can truck at over 35 knots in good weather, so the trip to Haines takes just under 2 hours. Here you see us crossing almost the same spot I took my kayak picture from. The weather's a bit different this time, though. It's not really raining; it's that unique Southeast Alaska overcast weather. 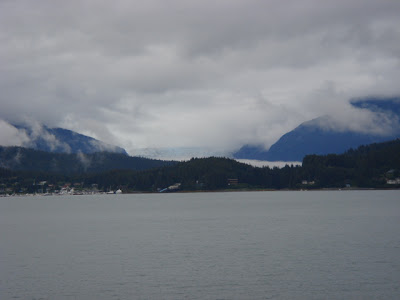 As we continued out of Auke Bay, the view of the harbor changes. That's a bigger view of the glacier in the dead center of the picture. 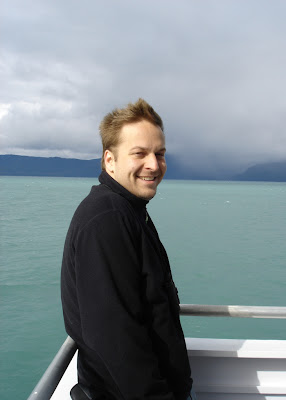 For all of you folks jonesing for more pictures of me, Evelina was kind enough to snap a shot or two on the ferry which she subsequently labeled "debonair." Make your own decisions on that one. 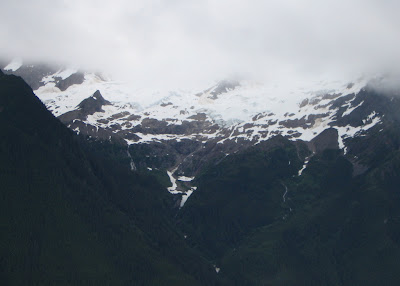 In our swift journey, we covered dozens of miles of water. The whole profusion of islands is covered in glaciers or the ancient tracks of glacers, huge tears in the mountainside that still have meltoff streams and rivers coming down. It's a landscape unlike any other I've ever seen. 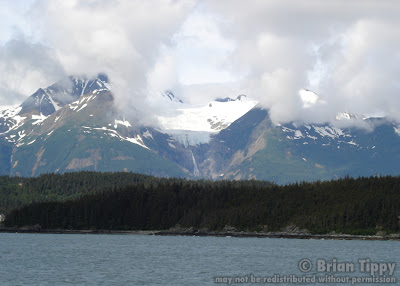 Glacier after glacier passed us by, and I re-learned something by sight that I had already read: glaciers come in infinite variety and color. The mountains, by their locations, contours, and compositions shape the natures of their glaciers just as much as they are shaped by them. Their colors, their altitudes, the plant and animal life that spring up in their receding tracks are all unique to each glacier and landscape. The mountains and glaciers tell the story of thousands of years in the birth of landscapes, easily visible to the naked eye.

The islands and glaciers weren't even the point of the trip, just a gift along the way. We drove a few miles northeast of Haines, up the Chilkoot river, to stay at a small camp whose purpose is to educate folks on the culture of the local Tlingit people. Nora Marks Dauenhauer, a clan elder, was our host and guide, along with her husband, Richard Dauenhauer. The Chilkoot river comes down the east side of the mountain range and the Chilkat river comes down the west side. Each has a distinct history. 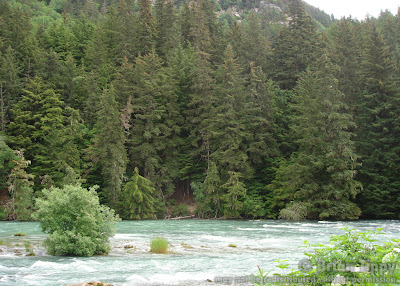 On the right is the view of the Chilkoot river from the back of the camp; it's icy cold and green-gray with glacial silt. In the upper right corner, there's a bald eagle in the trees, but you can only barely see him as a white dot. He was our constant companion, looking at the deepest part of the river for hours each day. 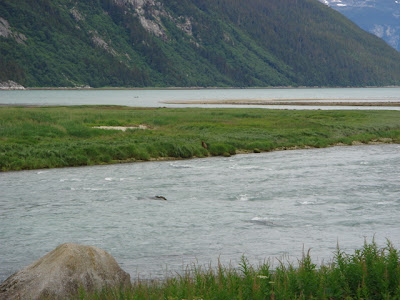 Yes, there were bears. We had to take all kinds of bear-related precautions at the camp, including not having any food or other attractive items in our bunkhouse that, incidentally, had no latch and could have been nosed open by a 20 pound, unmotivated beagle, much less the 17-ton mama grizzly who tore the door off the camp's smokehouse last season. To your left is a picture of the mouth of the Chilkoot with a grizzly in the dead center. This is about 1/2 mile downriver from where we were staying. 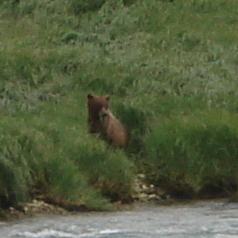 He's a "little" one, probably a 3rd year cub. These are, once again, crops from my 3x zoom, so you don't get a lot of detail, but it's a pretty good distance to photograph a grizzly from. You also don't get scale, but I wasn't going to hug this particular landmark. I estimate him at a couple of hundred pounds.

He's cute as heck, grazing away on the river grasses, but grizzly cuteness is proportionate to distance. The same sized bear, when he appeared at the camp later that day, was a little more pulse-quickening. 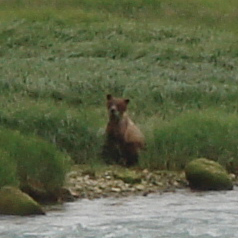 That's it for the first entry on the Haines trip. We also went to the village of Klukwan, which used to be one of the five great villages of the Chilkat people, and is now the only remaining one. There's a cultural center there where some of the folks keep their traditional ways of living alive, so look for photos of the longhouse, the Chilkat cultural center, and lessons on salmon butchering in subsequent entries.