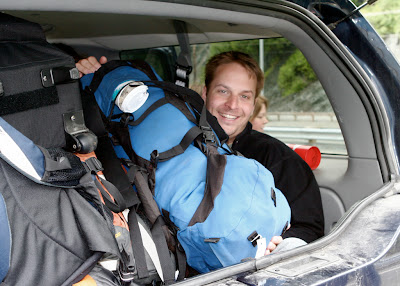 There are a few more pictures and ruminations to collect about our Haines trip, and since the last few photos seem finally to have trickled in, today seems the day for it.

I also have a large paper due Tuesday, so today is also an excellent day to procrastinate, though I think I can make an excellent argument that this is somehow foundational work for the paper.

Anyway, we were somewhat overloaded in our trip from the ferry to the Chilkoot camp, so I volunteered to ride in the Ford Excursions's cargo area. Under the cargo. 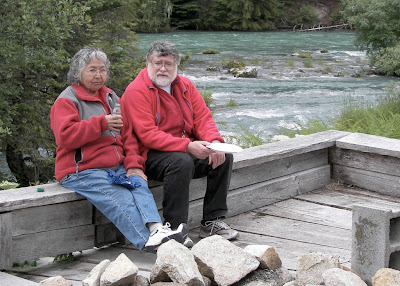 These were our guides to Tlingit life and culture, Nora and Richard Dauenhauer. Nora is a clan elder, author, and poet, and she and Richard work to preserve Tlingit language and stories.

They were kind enough to share their poetry and the region's stories. 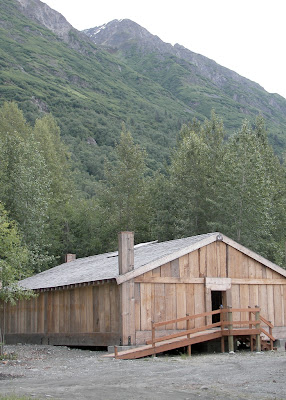 We visited a Chilkat culture camp on the other side of the range in the town of Klukwan. The people there are trying to carve out a living and hold onto a unique and ancient culture, and this camp is a way to both preserve and share it. They're still getting things up and running, but they built this longhouse by hand, using traditional techniques. 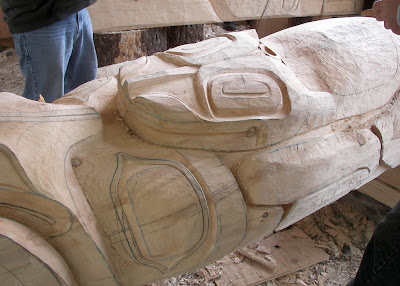 These totem poles will be painted and fitted to the front corners of the longhouse once they're finished. Each pole carries representations of different clans; the one in the center here is killer whale. You can tell by the blowhole above his eyes. When he's finished, he'll also have prominent teeth, which is how you can tell him from a baleen whale.

On a side note, Raven and Eagle represent not clans, but moieties. You can be a member of any number of clans, but you're also either a Raven or an Eagle. Both clan and moiety are passed down matrilineally. You're supposed to marry the opposite moiety, so a Dad typically finds himself the sole Raven or Eagle in the house; this is a source of much hilarity. 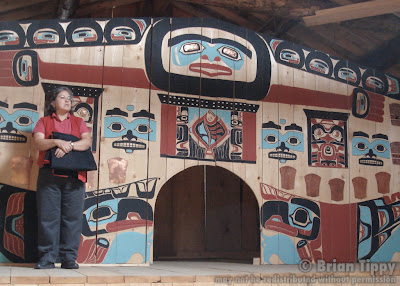 This is Kimberly Strong, inside the longhouse, explaining its construction, traditional purpose, and contemporary purpose. She, too, is a tireless advocate for her region and her culture.

The wallscreen behind her carries a number of important icons of Tlingit art. Raven, on the lower left, is a mischievious creator figure. Eagle, on the lower right is his friend and equal. There's Halibut in the middle; it's an important fish for subsistence, but I haven't yet heard any stories in which it's a character.You also see the ubiquitous Chilkat face, representing humanity, repeated across the center. In between are pictures of the bentwood boxes that would be used for storage by families living in the longhouse. The copper tokens nailed to the screen are tows, used for a while as money.

The large face and widespread arms at the top represent the spirit of the longhouse, nurturing and welcoming all who enter, a promise fulfilled by each person of Tlingit descent we met on our trip. 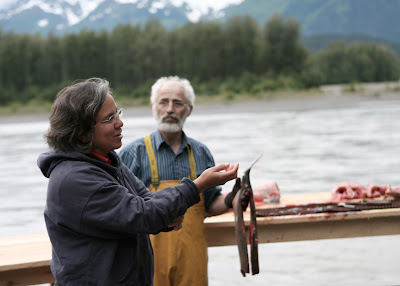 Kimberly also taught us how to prepare a salmon for the smokehouse. She's Tribal Council President of Klukwan, but that doesn't mean she doesn't get her hands dirty. Apparently she's a particularly respectable fish dresser, though I'll admit to lacking the expertise necessary to judge her in that area. 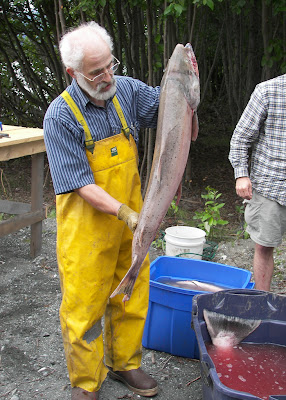 This is Valentino, an Italian butcher who expatriated, married a Chilkat lady, was adopted as a Tlingit, and appears to be really enjoying life. He's a short man, but that's still an enormous King Salmon—around thirty-six inches long. Valentino's butchering skills get a good workout when the fish are running, and he handled them like a pro.

I've chosen not to include any of the somewhat extensive set of fish-butchering photos people took of Valentino's rather impressive skills. You're welcome. 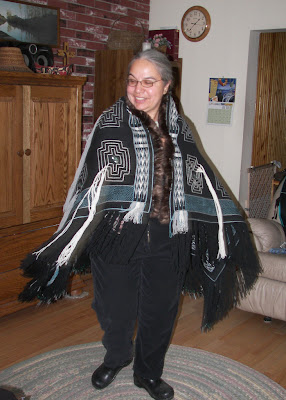 On the right here is Lani Hotch, a weaver and contributor to the culture center, which does not yet have a weaving area. Lani was kind enough to have us in her home, at her private loom. She's weaves mainly in the Ravenstail style, represented in the geometrically-patterned blanket you see her modeling on the right. 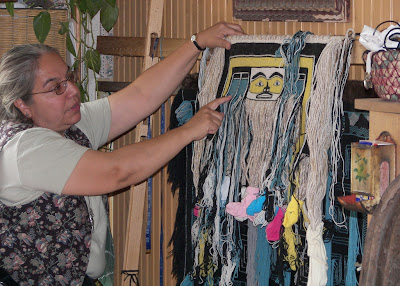 Here you see her demonstrating some of the techniques of Chilkat style weaving, which she does less frequently than Ravenstail but to my eye, no less competently. 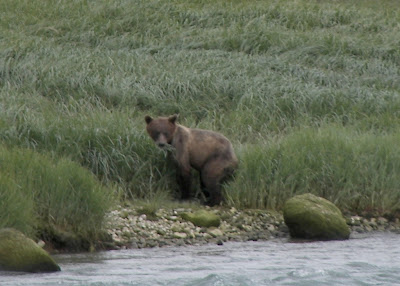 What would a journal entry on Haines be without a single reference to bears?

Mary, with a superior zoom and good timing, was able to take one of the better bear photos. You can even see the grass he was grazing on. 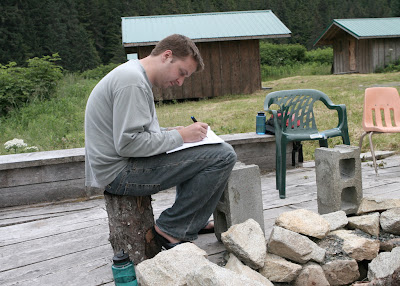 And there was, fortunately, enough time to write some things down, so I've got a couple kinds of memory to draw on to both create these entries and to do what I can to preserve and share what I was lucky enough to see and learn.

The Tlingit stories, artwork, and weaving I saw are part of a noble and beautiful culture, and it would be an ugly chapter in our story if we forgot them, particularly when they have such a long history of wisdom and coexistence with the wild world.

Thanks to Mary and Mark for the pictures in this entry.