You Guessed It: Glacier 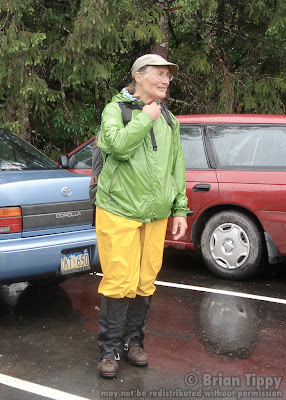 This is Cathy Connor, a professor of geology at University of Alaska Southeast, the campus which Bread Loaf Juneau calls home. She took us on a walk up to Mendenhall Glacier to talk about the local rocks and, specifically, the glacier's role in shaping the landscape.

We took the same trail I hiked on 6/24, except this time it was raining with a gentle intensity that defies clichéd descriptions of rain. It was neither driving nor pouring; nor was it lashing, tempestuous, or torrential. It did not come down in sheets nor did it let fall cats and dogs. The closest I can come to an accurate description is "a soaking rain." There was a lot of water falling from the sky, and though it was not joined by a great deal of wind, it saturated every fiber of both clothing and being after a little while.

It was temperate enough that I made the decision to forgo my raincoat. I didn't want to spend the walk fighting to stay dry with the hood up and the blinders on. I decided to be endued with water and to trust my high-tech clothing to block enough of the chill glacier winds. 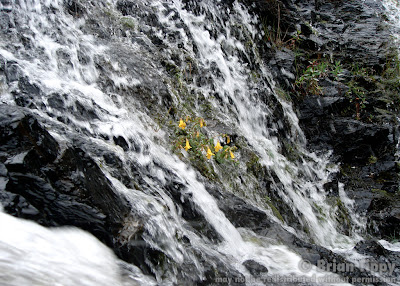 The rain swelled this waterfall outside its usual track with rain, but this Monkey Flower (from the much-debated Mimulus genus) was growing in the middle of the original waterfall's course. 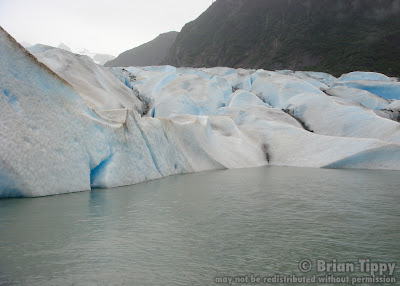 The glacier has receded visibly since the last time I was here. Summer is a time of faster recession, for the obvious reasons, and a glacier melts and calves particularly fast when it meets water like this.

Still, to see the areas on bare rock retreat a good ten feet and the area on the water retreat even more than that in only three weeks made it easy to believe that global warming is melting the glacier faster than a normal post-ice-age retreat. 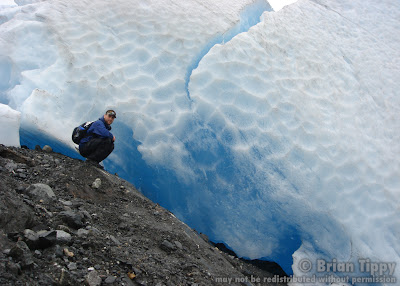 Charles has a gift for striking photogenic poses; here he is a few feet up the shore from the lake. The white ice is called firn, and the lower, blue ice is true glacier ice. It's blue because it has had most of the air compressed out of it. When it gets re-exposed to the atmosphere, it slowly expands, aerates, and turns white again.

A snowflake is a typical ice crystal; a freezer ice cube is a whole series of small crystals stuck together. In a glacier, the immense pressure, together with the melting and refreezing that typically take place, forces the smaller crystals into alignment, and they join up into larger crystals. Cathy commented that the blue, compressed ice has more of a mineral quality to it; the ice crystals are positively enormous, and you can see the water's true color. 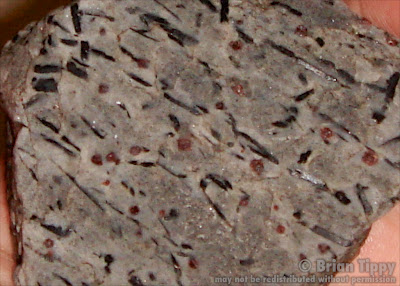 Hiking with a geologist put me in geology mode, and I found this really neat rock. Cathy says the red bits are garnets and the black are probably tourmaline. The exposed rock and moraine right next to the glacier are a hodgepodge of rocks from a vast array of eras and areas, brought to the surface both by tectonic process (Alaska is getting higher) and by the immense power of the glacier.


I wasn't too much in geology mode. We got a good look at a Spotted Sandpiper, who flew back and forth, piping. He was probably trying to protect his unfledged hatchling, who made a break for it from one small stand of alder bushes to another.

We didn't stay so long at the glacier that the cold breeze coming off of it made me truly miserable in my wet high-tech gear. I was just comfortable enough to be truly content. Then a brisk walk back to the trailhead and off to a long, hot shower. I may have been philosophically inclined to get wet, but that didn't mean I had to stay that way.
Posted by Brian at 2:00 PM