Due to a somewhat misleading set of schedules half a year ago, I booked a flight for tomorrow morning, even though classes and events were essentially over as of yesterday afternoon. So now I sit in the limbo space between the end of Bread Loaf and the beginning of the next thing. Cons: watching everybody trickle out, one by one, in a dejected array of goodbyes. Pros: a day partly to myself to reminisce and start collecting a few thoughts while my brain is still literally in Alaska, though I imagine it may figuratively travel there from time to time. 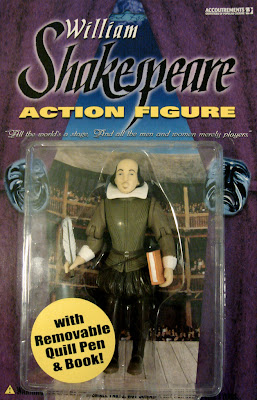 This is, perhaps, the moment to mention that I was in a production of Hamlet this summer. I've gone on and on about my Searching for Wildness class, but I haven't so much as mentioned that I did, in fact, take a second class: Shakespeare: Page to Stage, a class that focused on taking Hamlet from the text to an interesting, meaningful production.

It was a long haul, but we pulled it off. Marilee, who played Hamlet, gave me this spectacular action figure. As if he weren't cool enough, he has a Removable Quill Pen and Book. Removable. Quill. Pen. AND BOOK!

I guess his accessories do "bend with the remover to remove." Har.

If this isn't going to make Shakespeare cool for kids, I don't know what will.

My apologies. Part of this entry was written at 6AM while I'm waiting for my flight to Seattle and subsequent connecting flight to Newark. So I'm a little less than lucid. 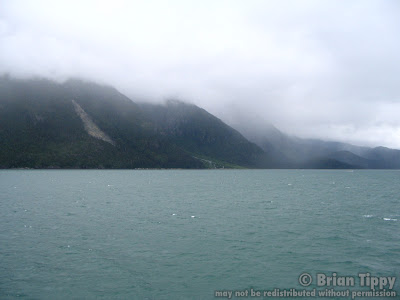 On the way to the airport, in the early morning fog, I was struck by the modesty of the mountains here. They wrap themselves in cloaks of fog like the emperor in his new robes, as if they hadn't brazenly, shamelessly exposed themselves days before to the clear sun and every naked eye.

It poured as we loaded the van. On days I've left other places, I've thought to myself that the rain was the sadness of the place to see a friend depart. Here, it was more of a kiss, a nurturing touch that this place imparts to all the living things that grow here.

(This photo is from the ferry ride to Haines).

Time to fly away back home, to a different place, a different pace. Different weather, different birds, different clouds, different mountains. I've been touched by this place and the people that inhabited it with me for a while. So I'll leave this empty dock and hope it holds a place for me again sometime.