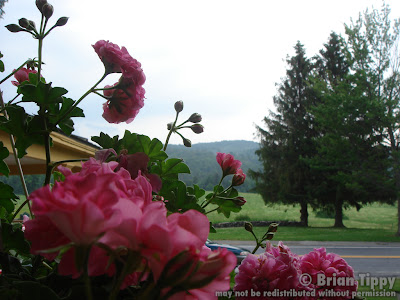 I haven't had much time or, frankly, motivation to write in the last few days. My arrival at Bread Loaf was punctuated with a number of irritating inconveniences and unpleasant surprises, so I haven't exactly been eager to shout my story from the rooftops.

First, it was appallingly hot and humid up here on Tuesday and Wednesday, my first two days here. You can see the haze off over the low hills in this picture.

Second, my living quarters are no prize. I'm around 1/4 of a mile down the road from the central campus, and though the ground floor appears to feature air conditioning, my bedroom upstairs felt a few degrees hotter than the already oppressive outdoors, and was stifling to boot. I think I slept around four hours.

These rustic accomodations also lack any kind of internet connection, so free voice conversations are basically out the window. The walls do, in fact, feature ethernet jacks, but I'm told those are ornamental at this point (the jacks, not the walls). The founding fathers of Bread Loaf, back in 1915, installed them with great foresight, envisioning a day when fiber optic cable would be rolled up the mountain. The only places, in fact, to get online are the central building, called the "Bread Loaf Inn," and the Library. The computer lab, where I'm sitting and typing, isn't near enough to the wireless router for my laptop to pick up a consistent signal. I haven't yet tried floating about the lab with the laptop, checking signal strength, because I don't know all that many people yet, and I'd rather not be labled "that insane guy that dowses with his laptop." 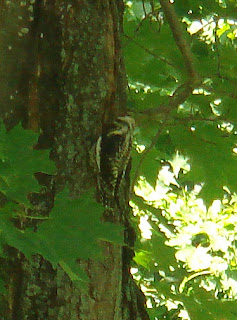 But enough complaining. I'm supposed to be posting pictures of lovely landscapes and woodland creatures. To wit, here's a Yellow-bellied Sapsucker, the eponymous critter of this particular journal entry.

Once again, I challenge anybody to get better bird pictures with a 3x zoom. One day, my friends, I will purchase a camera with spectacular image resolution and a telephoto, and you'll be counting their nosehairs.

That is, if birds had noses. Or hair, for that matter.

In all seriousness, you have to be about 10 feet away from the bird or less to get even images as grainy as this.

One of my classes is "Romantic Poetry: Discourses of the Sublime in Poetry by Men and Women." Yesterday we spoke a bit about Edmund Burke's theories on the sublime and that which inspires terror, and today was Blake's "The Tyger" and "The Lamb." So while perhaps these courses won't insist on as much of a connection to nature as "Searching for Wildness" did last year, there's certainly no stretch in regarding the dipping flight of an elusive sapsucker as revelatory. If you haven't participated in this kind of low-speed chase before, I highly recommend you power down or fold up your computer and hit the back yard.