Creatures of the Night, Brought to Light 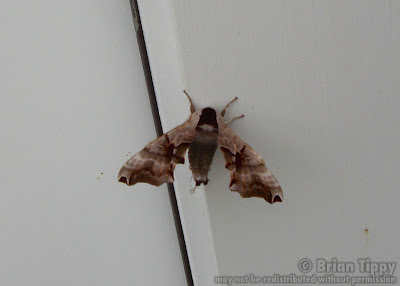 Step right up folks. This is Vermont, where wingèd creatures of fear roam the empty plains as the harrowing winds strip all but darkness from the soul. The eerie cries of lost spirits echo in the lonely reaches, and beasts spawned by the hatred of evil for all that is good and pure leap steaming and smoking from the cracks of doom.

This beast staked out the entrance to my house, unmoving for two days straight, calling out taunts like "Nevermore!" and "Catch up on your reading!" each time I entered.

By the time it left, there was a large pile of gnawed chipmunk bones beneath its cursèd perch.

If Pandas were evil moths of darkness instead of large, gassy ursids, this is what they'd look like. 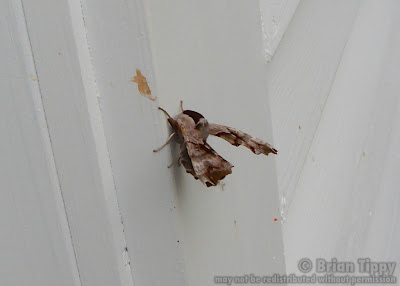 I think it was chewing its way into the building so it could feed on the blood of the sleepy innocents within. Or else it was trying to take the whole damn house back with it to the smelly darkness from whence it came.

Really hard to identify this crazy critter. My best guess is that it's a Twin-spotted Sphinx Moth (Smerinthus jamaicensis). Objections are welcome. 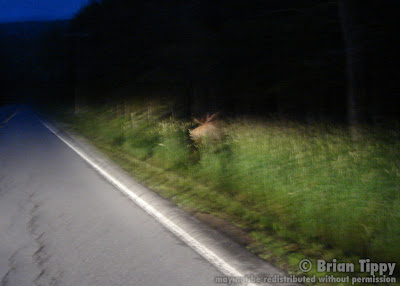 On Friday afternoon, I attended a barbecue at Gus and Cameron's amazing new home in eastern Vermont. On the way home, around dusk, I found this young moose on the roadside.

Though my first instinct was to befriend him as St. Francis would have, he was clearly unnerved by the fact that I got out of the car. His nervousness, however, did not cause him to retreat. Instead, he blew aggressively out of his nose and gave me the hairy eyeball, which he's doing here.

Now, I don't speak moose as fluently as some folks, but I understand that one. 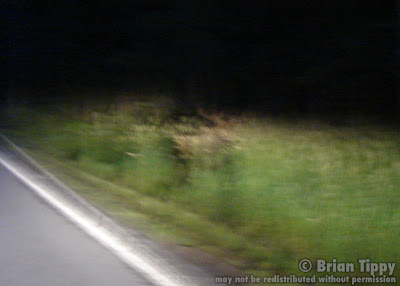 Here's an even worse picture. Nothing like darkness, a tiny camera, and a running car for a tripod. 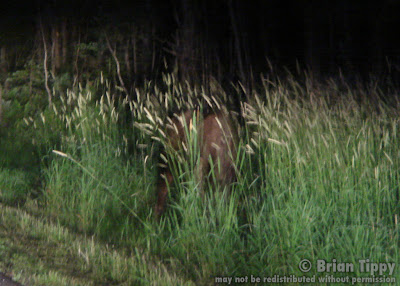 Obeying the second law of thermodynamics, the clearest picture was also the worst pose. 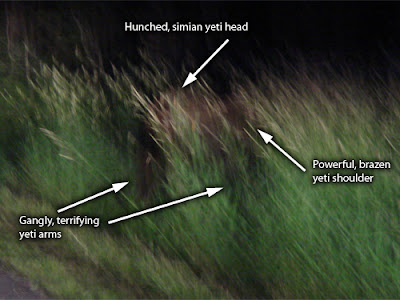 In my closest and clearest shot, however, you can see that this creature was no moose at all. He was, instead, a diabolical yeti masquerading as a moose, periodically holding up his grisly trophy of real moose antlers. This technique would fool anybody lacking the sufficient derring-do to get out of his car and approach a huffing, uncomfortable bull moose.

The photo and diagrams, I think, are unobjectionably clear in proving the species of the animal in question.

Perhaps you've heard that Vermont is for lovers. I hope you now realize it is chock full of diabolical, creeping creatures of violence and despair. Tune in next week when I catch the yetis and the moths on film, battling for ultimate supremacy of this shadowy wasteland.