Toads About and Moths Redeemed 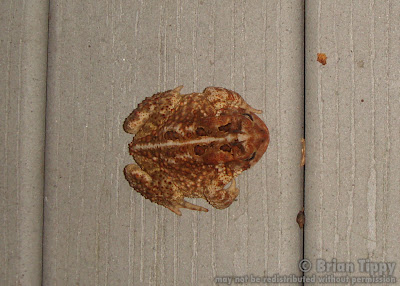 Warning, toads on the porch may seem larger than they appear. This handsome, warty fellow is the plain old Eastern American Toad (Bufo americanus americanus), apparently in his "red" phase. Very patriotic fellow, both in name and color. And the stripe, frankly. 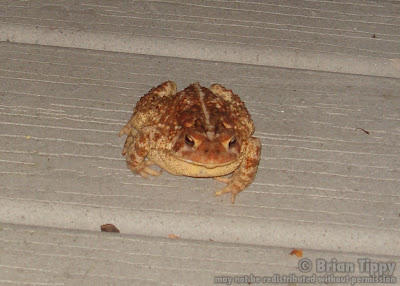 Here he adopts an attack posture. OK, OK, so he sat there while I took a dozen pictures, and only moved when I got up after I was done. Damn vain amphibians. 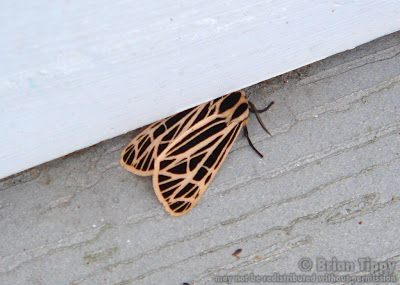 All my slanderous, libelous comments about moths must be retracted. During the last week, we've been sent some of Vermont's finest, most beautiful Heterocerids. The fact that this Harnessed Tiger Moth (Apantesis phalerata) appears to be trying to get into the house will be ignored in light of its pattern. Looks like a toy, almost.

I want to know how two moths of the same kind find each other. There must be dozens and dozens of species flitting about the lamp each night or hiding from the rain in the awning. How do they know which other moth in the melee is compatible? I tell you, finding a match is hard enough when you can talk; you still learn to hold on really tight. I am thankful we do not have to find each other in a storm of colors and smells and bats quite like moths do. 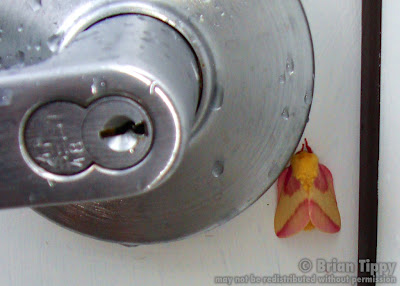 I was absolutely struck by this tiny guy hiding from the rain as I was reaching for the door handle the other day. I didn't know moths did beautiful colors, and I still don't understand what purpose they serve.

This guy is a Rosy Maple Moth (Dryocampa rubicunda). I had already given the file the name "rosymoth.jpg" before I even identified him. Johan Christian Fabricius identified this guy in 1793 (well, probably not this particular moth), and he clearly has good taste in moth names.

Thanks to my dad for identifying these guys for me, and for helping to retroactively identify some of the moths from earlier journal entries.

Last night, David Huddle, my "Contemporary American Short Stories" professor read some of his poems to a rather large, rather rapt audience in the Barn. When it let out, we headed over to the Treman house porch for a little bit of libation and conversation, and I decided to photograph the last glimmer of the setting sun, rather than the pink and gold symphony that had gone on a few minutes before. I know the camera failed, but don't they always fail? I thought, though, it captured just enough of the color and the sense that it was all fading away, and that was certainly what was important about the moment.