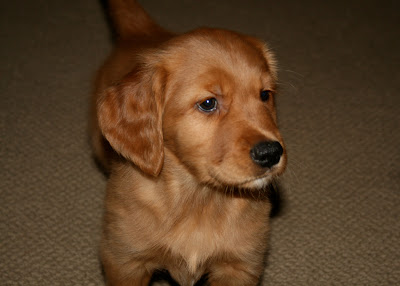 Last night, Lisa called and said that if I was still interested in the particular puppy I had picked out, he was mine for the taking. My mom came up to act as chauffeur (chauffeuse?) so the pup wouldn't have to experience his first car trip and separation from his family all alone in the back.

We got there, talked details, signed some papers, and I played around with the pup I had connected with a few days before. We knew him by the purple and white fabric paint he had on his back; the different colors were Lisa's way of telling them apart as she tested temperments and aptitudes.

He was the same alert, high personality pup I remembered, and after a few minutes of play in the backyard, he climbed into my arms and I sat in the passenger seat with him all the way home. He also left behind the name of "purple-white" and was officially dubbed "Comet."

From his first second in the house, he's been inquisitive, alert, and tuned into people and events. 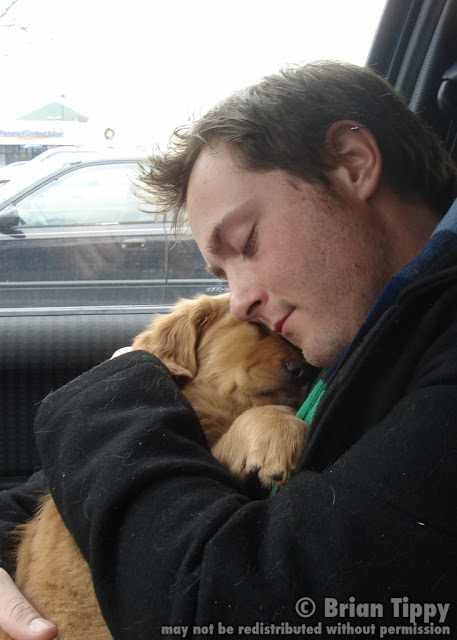 Even before we got home, though, we needed to visit Andy on his break from work. Comet, exhausted from the anxiety of the separation and the trip, and also from his one major puke in the seventy minute trip, and soothed by Andy's wonderful warmth, dozed right off in his arms.

This looks like the beginning of a beautiful friendship, no? 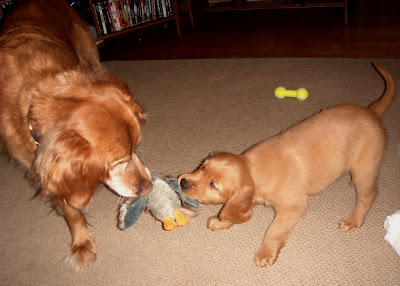 Comet lost no time introducing himself to the final member of his nuclear family.

Gus, for his part, exhibited no jealousy, no aggression, and no selfishness around the pup. 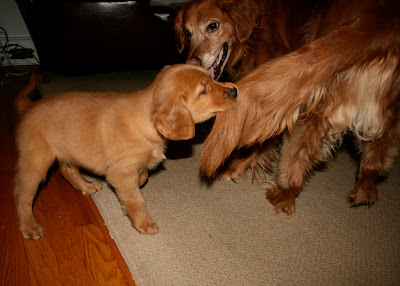 That's an understatement. Gus was remarkably tolerant and enthused by even the most obnoxious behavior Comet could muster.

Remember: Comet has been in the house for less than three hours at this point. Gus gets major points for helping to make the transition so smooth and fun for his new little brother. Well, technically, Comet is his father's half-brother, but let's not split whiskers.

The fact that I made a dog pun that derivative must indicate that I've devolved into a crazy dog person—or that I've been deprived of sleep. 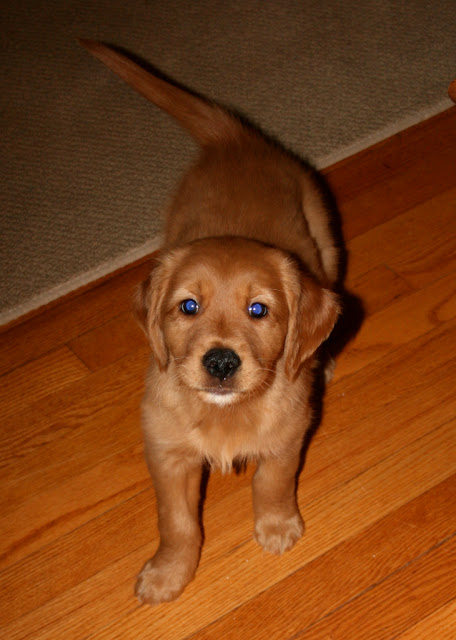 It's not all perfect. This day kicked off a week of sleep interrupted by sporadic yips, a handful of accidents involving the undeveloped bladder control of an eight-week-old golden retriever, and a 24/7 commitment to getting Comet started off on the right foot on the literally dozens of behaviors and attitudes that separate the good dog from the problem dog.

So I've gotten little sleep, and practically nothing done, as evinced by the fact that this entry about 1/6 was actually written and posted on 1/14. But look into that inquisitive, eager to please, and slighty heathenish stare and tell me it could be anything but worth it.

And besides, with Gus, Andy, and me all working with him and pulling for him, we'll all make it through pretty well.

Many thanks to my mom for most of these pictures.