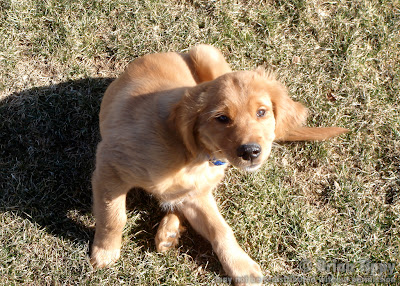 It's possible that Comet isn't a huge fan of his collar or that he has a spot of dry skin on his neck, but lately he's taken to stopping for a scratch at hilariously random intervals. He doesn't do it particularly hard, or for long at all, but he does enjoy these scratches.

It occurs to me that he's growing into all that extra skin, which may somehow be an itchy process. 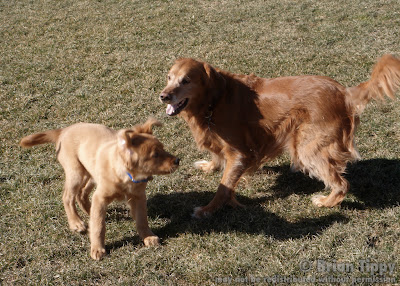 Of course, whether you're scratching or not, it's important to listen to your elders. I didn't realize until the camera froze the action that Comet is really quite surprised and attentive when Gus barks at him during a romp. Or maybe it just looks that way. 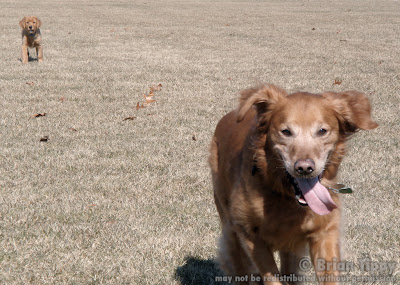 The dogs are trained, or rather, Gus is trained and Comet is being trained, to return to a particular whistle. While Comet's already amazing at coming to an actual call of "come," he's still figuring out the whistle, so there's a brief period of deep, deep thinking before he runs over to check in. This delay results in some rather hilarious photos when Gus gets a good head start. 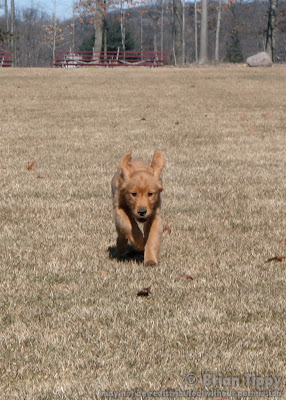 Comet is, of course, getting the hang of it as he goes along. Once he figures out what's expected of him, he's pretty enthusiastic about doing his job. Wait until we translate this enthusiasm over to fetching...

Can you see his gait developing? 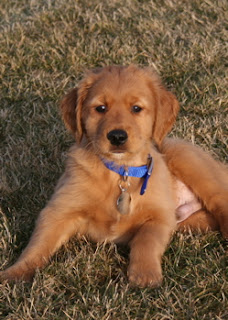 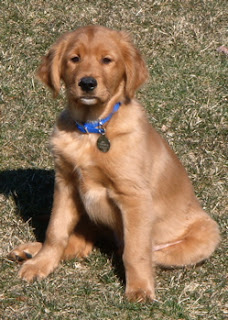 On your left, January 12th. On your right, today, February 11th. Comet can get a lot done in thirty days. 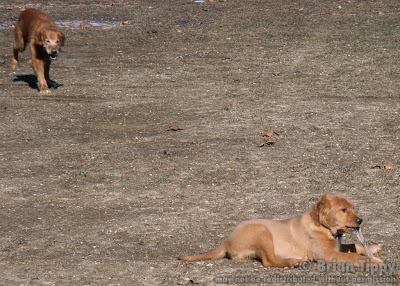 We got a lot of photos in today. Another highlight was one of Comet's first victories in the perpetual Golden Retriever battle to accrue more sticks and toys than the opposition.

Comet finds a good stick and settles down to chew. Gus plots his attack. Cue the dramatic cellos. 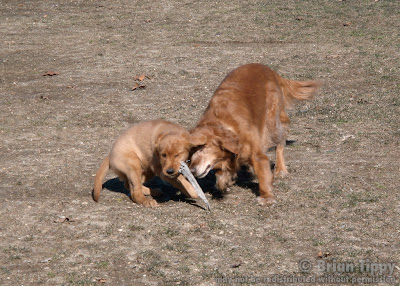 Gus strikes! Comet reacts! The titanic beasts struggle for control of the precious stick—which, in retrospect, may have been a chunk of mulch. 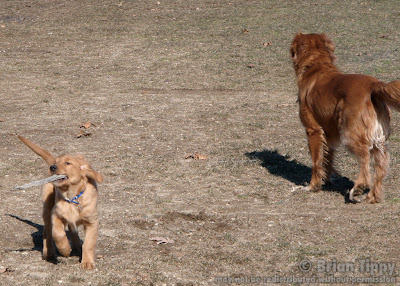 I bet you thought the older dog was going to win. Somehow, Comet kept a hold on the stick. Gus, who honestly does prefer tennis balls, has an easy time pretending he wasn't interested in the stick in the first place.

Comet is doing just about his proudest strut.
Posted by Brian at 2:00 PM