Joy in the Genes 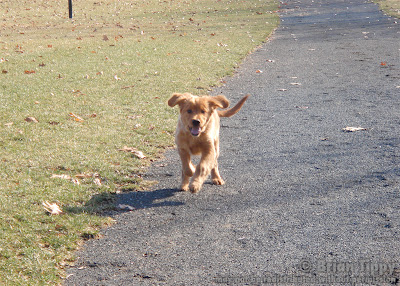 Holler out "Come!" and this is what you get. Training Comet to do this started with Lisa, the breeder. She would take the puppies into the yard, individually, and pre-train this behavior. She would stamp her feet, whistle, and clap, and when the dog came over to check out the fun, she'd praise him.

Teaching a Golden to come is a matter of confirming a natural tendency that's hard-wired into a retrieving dog. He feels good coming back to a friend; he feels natural. When he's little, you whistle, clap, and stamp, and when he comes over, you throw a little party for him. He soon learns that coming is super fun.

So nowadays, just whistle or call out "Comet, come!" and he comes over and gives the little wiggle and sit that proclaims, "Look how good I am!" 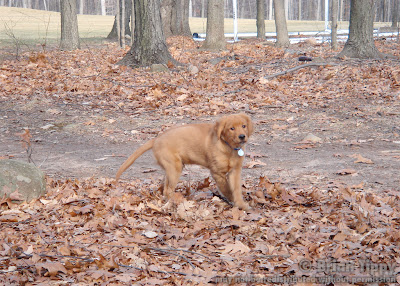 Not everything is all that coordinated. Sometimes a turn or an attempt to return get a little complicated. Or, he could be working on a little do-si-do. You never know. 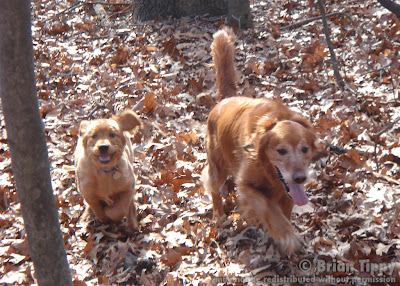 We take lots of opportunities to practice come, for both dogs. Gus has a tendency to become slightly hard of hearing when things are really interesting, so it's good to take the time to drill him in what's expected. Comet, as is his tendency lately, explodes into action once he knows what he's supposed to be doing. 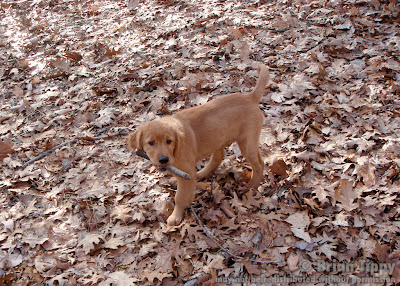 Here's evidence of another genetically hard-wired behavior. Just as the golden color breeds true in most or all of these dogs, be it light or dark, the retriever appelation is apt as well. Comet has taken to falling in love with a stick and carrying it for quite a while. Some of them get moved close to a mile from their original locations before he loses interest or finds a new toy.

It's really quite considerate of him to find a toy that's cheap, ubiquitous, and healthy on the teeth. 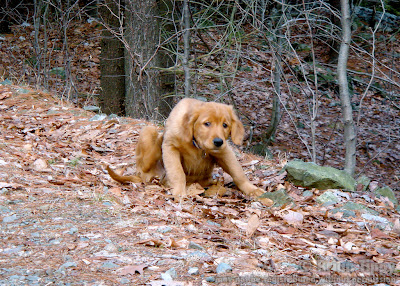 What would a good walk be without a little scratching time? As I try to snap shots of him in a particularly cute sit, it often turns out that his reason for sitting is to address an itch. Initially, I had the urge to toss these scratchy photos as errors, mistakes, documents of unflattering moments. But the string of them has begun to amuse me very deeply, and I'm starting to realize that in the middle of an almost self-conscious scratch, he can be at his cutest. 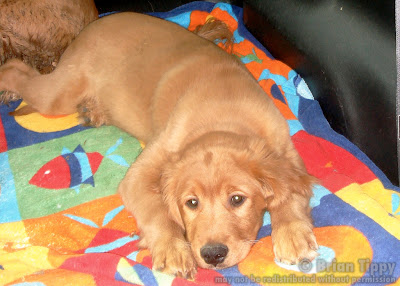 After a long day of coming, running, playing, itching, and carrying, it's time to head home. It's a rather short trip from the water company property back to the house, but Comet took the opportunity to relax a bit. In one way, this photo is a total success: it captures that far-off, introspective look that Comet (and Gus) sometimes gets. I don't like to personify dogs; in fact, I like to remind myself that a dog has his own unique psychology and that mistaking him for a person on the inside can cause both misery for the dog and for his master.

I'm lucky to spend time with two animals who know better than I do how to enjoy and embrace every smell, every texture, every lake (even at 35 degrees), and every paw's contact with cold soil. When they flash gold in the sun, I lose, just a little bit, just for a moment, some of my self-consciousness, my worry over the ten thousand things I haven't finished or haven't done well. And in that little space we've made, there's at least a fragment of simple, unabashed joy. 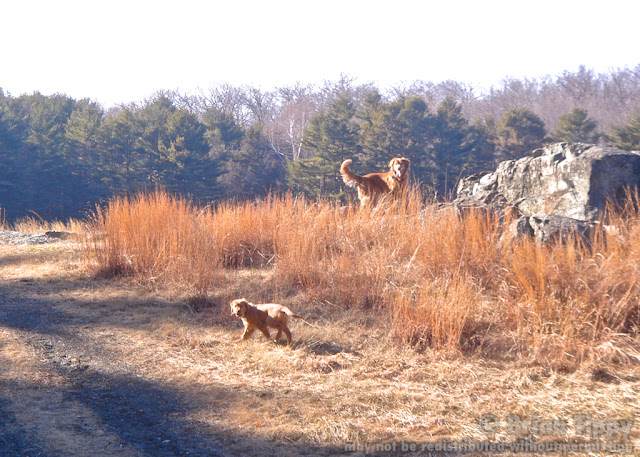