Puppy in the Mist 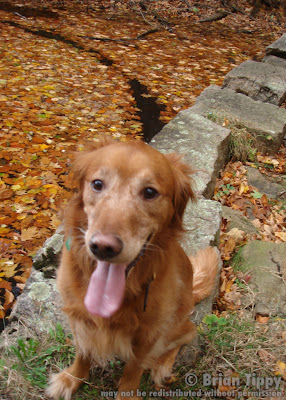 We got to thinking that because Gus was already the best dog in the entire world, the next logical step was to add another one to the family.

So I went on a breeder research spree in order to see if the perfect dog for us was out there in the ether or in the world. I've heard lightning can strike twice, y'know?

I started with Sunfire Golden Retrievers, since their amazing dogs figure big in Gus's pedigree. 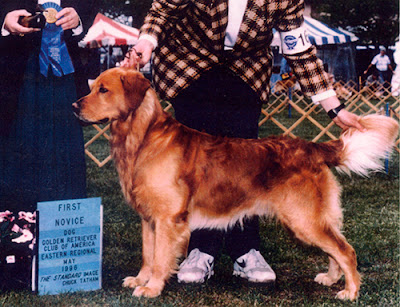 Gus's grandsire on his father's side is the award winning Sunfire's XX Muleteam Borax, one of the more celebrated and wonderful golden retrievers in recent history. This picture was taken back in May of 1996, when Borax wasn't even three. He's just won one of many titles for obedience, working, hunting, utility, and the like. 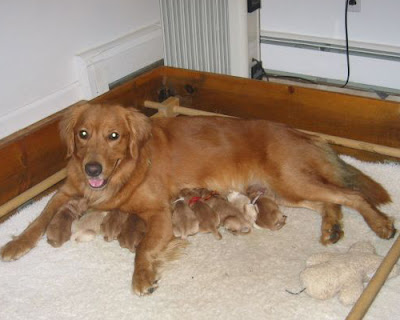 The Sunfire folks don't have any litters right now, but Borax's owner is starting out as a breeder, and her first litter of puppies crosses Borax with this gorgeous dog, Emma (Sunfire Windrush's Mrs Peele), who at two already has her master hunter rating.

If, like me, you recognize that Emma Peel is a reference to something, but you can't place it, follow the link and be edified by wikipedia.

The puppies are coming up on that magic eight week mark when you can bring them home, so I went to visit them and their mom (Borax has died at the quite respectable age of fourteen). 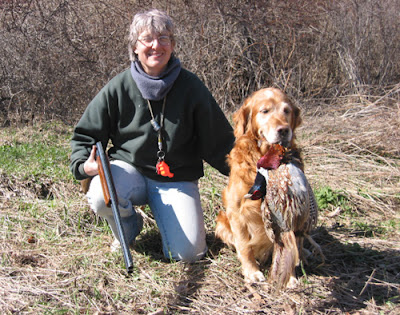 I met Lisa Weinberg, who is both Borax's owner and the wise soul who bred these two dogs. I was impressed with her dedication to both the breed and to her dogs.

Here she is with Borax, who was a hunting dog and an athlete right up until the end of his long, rich life.

After a couple of hours with the pups, I was sold, and Andy agreed that one of these dogs is for us.

I did, incidentally, fall in love with one of the puppies I met, but Lisa is very serious about placing the puppies carefully according to temperament, so I'll have to see what she says when I go back on Sunday to try to pick one up. This has all moved a bit fast in the last forty-eight hours, but Andy, Gus, and I are all ready for a new member of the family, so I'm as excited as I can be.