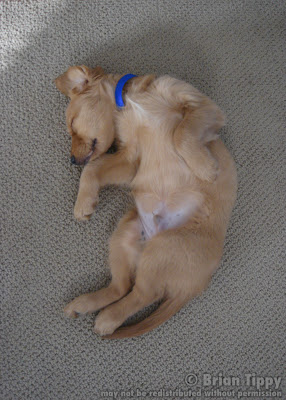 Yesterday's walk really took it out of Comet. We probably went less than a mile all told, and we were out for less than an hour, but he did do quite a bit of romping with Gus, and he's still just a little guy. He was definitely mellow a bit by the time we got back to the car, and the day after, which is today, he's definitely been a little more relaxed.

In fact, when Comet falls asleep after being active, he goes out completely. You can pick him up, maneuver him, examine his teeth and paws, and do whatever you like. He's out.

He has not, however, been maneuvered into this particular position. Unlike Gus, who has always slept either on his side or with his head between his paws, and who has always disliked being rolled on his back even for belly rubs, Comet seems to end up like this pretty frequently.

You can see, peeking out on his right thigh there, a tattoo of his AKC number. Lisa, the breeder, had that done a week or so before I adopted him. I can register Comet with national services that if he ever gets lost, God forbid, the pound knows how to get in touch with me. 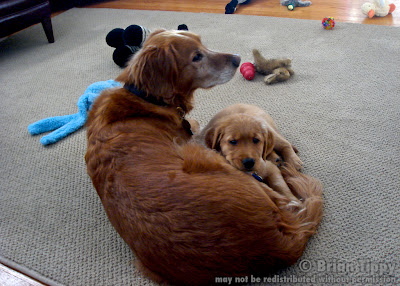 Being tired offered Comet an opportunity to practice an all-important skill for the companion Golden: snuggling. He's moved up in skill level from "I'm going to lie on your foot and snooze" to "I'm going to share warmth and love whether you like it or not." 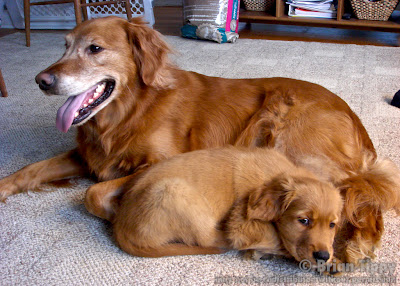 The best part is that Gus doesn't seem to mind. Even when he's clearly not all that enthusiastic about it, he'll usually let Comet nod off for a few minutes before he gets up to go do his thing.

I never thought the one of us with the most patience for Comet's puppy behavior was going to be Gus. But there he is.