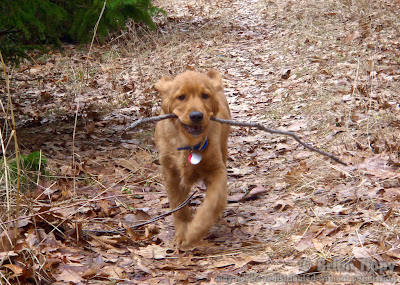 I spent quite a bit of this walk letting Comet get out ahead of me with a stick and then calling him back so I could snap shots of him in full retrieve. He thought it was great fun and started preemptively returning just in case it would garner him a "good dog."

We bought some lean turkey hot dogs to chop into bits and bring on walks as a way to confirm Comet's good behavior when he returns. However, I've forgotten them every walk so far, but he's always returned happily to every call, so here's to a dog who wants to be good with little need for gustatory motivation. 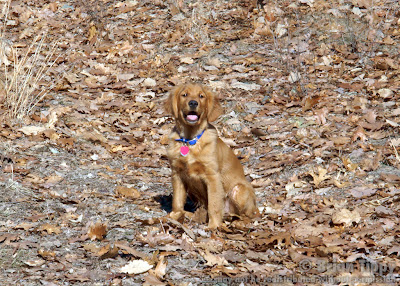 Comet has developed far enough along physically that, unlike when he was little and walked at my heels or even dragged a little at the end, he now walks out ahead of me for almost the whole of three miles. And, like Gus, he stops once in a while, as if to wonder why I don't like to trot quickly back and forth with my nose to the ground.

I'm out for a stroll, but they think walks are a religion. 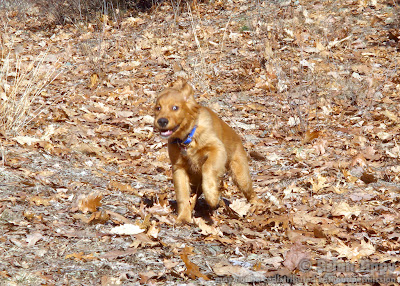 Of course, the noble look back for a lagging friend is but one of a myriad of expressions available to a young Golden. Total, explosive, psychotic discombobulation can follow seconds later, sometimes while that lagging friend has decided to call you in order to see if he can catch you at a particularly athletic moment.

Athletic, no. Hilariously deranged? You decide. 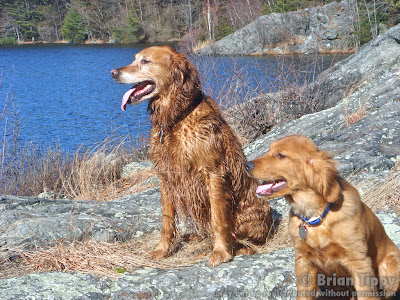 It's an endearing quality, this ability to be both joyously insane and effortlessly noble, sometimes concurrently. The boys, obviously, look beautiful and well-adapted to their surroundings. What's not instantly obvious is that it's thirty-three degrees out, and Gus has been jumping in and out of the water for no reason at all. The lake still had ice on it a couple of days before this, but the cold isn't nearly enough to stop a Golden who hasn't had a good splash since September.