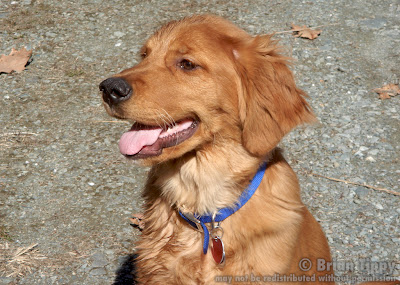 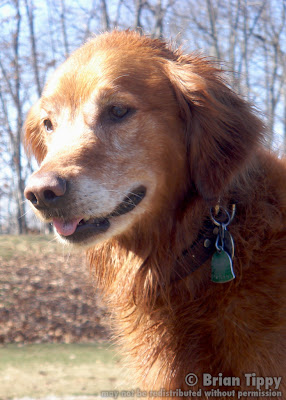 The singular focus of Gus's expression is, of course, due to the tennis ball that's on the ground just off camera. Even though he's panting, the focus brings his lower jaw up, and he becomes perfectly motionless, dedicated to his moment. I wonder what it is about that dedication that looks like wisdom. Maybe he's completely at peace with himself and his desire. Or maybe he's a sweet, sweet, silly dog.

Maybe it's the same thing. 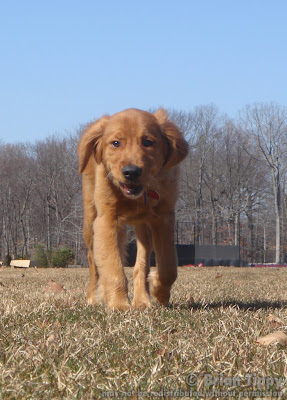 Of course, since Comet is growing so fast, he does have his awkward, discombobulated moments just as frequently as he gives those beautiful looks into the far-off ether. Though less flattering, these goofy, loose-faced expressions are perhaps the more accurate portraits. 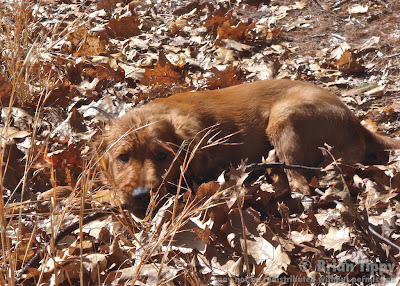 He's crossed the line in my mind from being a big puppy into being a small dog. His face and build have more of the long, adult proportions, and he's starting to move and act more like he will when he's truly full size.

That doesn't mean he can't be completely adorable when the opportunity presents itself. 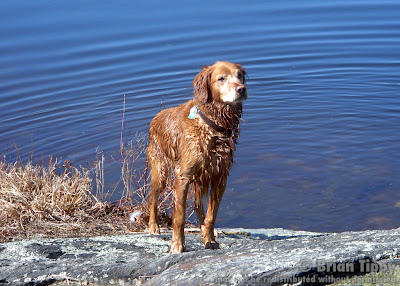 Gus will jump into the water these days just for the sheer pleasure of it (though, to me, the pleasure of a March dip in a New England lake on a sub-forty day is dubious to say the last). And when he gets out, he'll stare at you with great hopes that you'll magically produce a tennis ball for him to fetch. Nobody's holding a ball or a stick off camera here. This is just Golden hope. 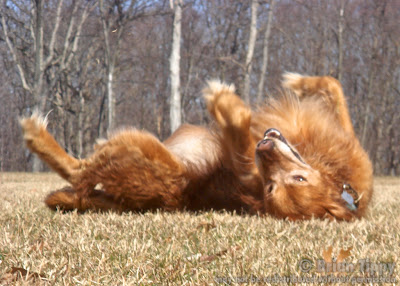 As you dry out, it's important to get a roll in. A nicely-clipped field is one of Gus's favorite places to scratch his back as he dries. His total abandoment to the process is a joy to watch. 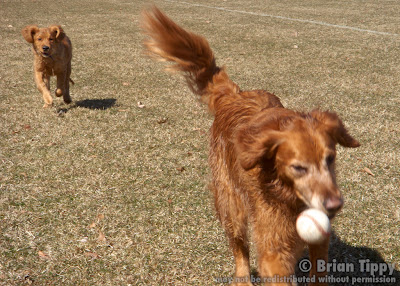 Of course, what would time on the field be without a little fetching? Gus turned up an old baseball and insisted we let him run around a little bit. Comet is still enthusiastic about joining in the chase, though he tends to give up once Gus gets ahead of him. The ball is out of Gus's mouth in this picture because he's tossing it back to us for another throw. 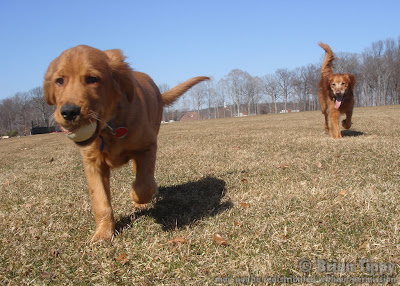 I'm trying to make sure that Comet doesn't lose interest in fetching balls during the period that Gus has such an advantage. Gus has a tendency to run out before you've thrown so he can get a head start, which provides a great opportunity to give Comet a short throw he can get to and retrieve before Gus has a chance to notice and steal the precious ball. 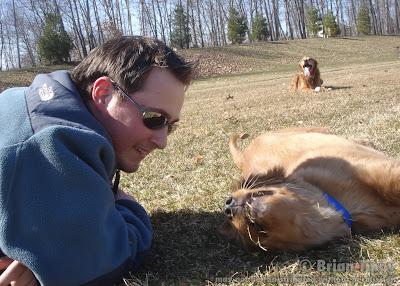 Comet, as you'd expect, likes to get a good roll in too. For some reason, he decided to tear at the dry grass with his teeth as he rolled around, all the while eyeballing Andy as if to say, "Why aren't you joining in? This is one of life's great, guiltless plesasures."

Gus, of course, is hoarding the ball for himself now that he has it back.