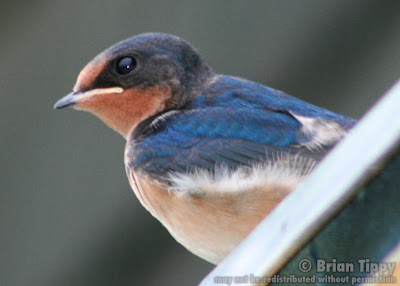 Classes at Bread Loaf all take place in the Barn, a literally-named place a few hundred yards behind the inn which itself sits almost on Route 125. The western third of the Barn has been converted into two stories of classrooms.

My stories class (Fiction Writing) takes place on the second floor, in the back of the Barn, and the room is graced with a fire escape, a great place to spend the fifteen-minute break in the middle of class.

Some Barn Swallows were undisturbed by our presence, so I snapped a few pictures of them with my camera, which I had brought with me to class. 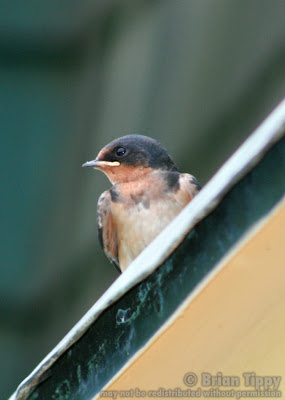 Two of them, presumably a nesting pair, were unruffled and docile, about ten feet away from the fire escape, and I was able to catch them giving me a calm if wary eye. Male and female Barn Swallows have identical (or nearly identical) plumage, so I can’t tell which is which.

In flight, they’re beautiful, agile birds, and the only local swallows to have the forked swallowtail. They’re a voracious and welcome presence on a buggy campus. In a typical barn, they’d nest inside and out, and would perform their valuable exterminatory services in exchange for nothing more than unmolested lodging. The current configuration of this barn, however, means the only real nesting areas are outside. Fortunately, most of the Bread Loaf campus has been maintained in an architectural style with plenty of eaves and gables, so they seem to do just fine. 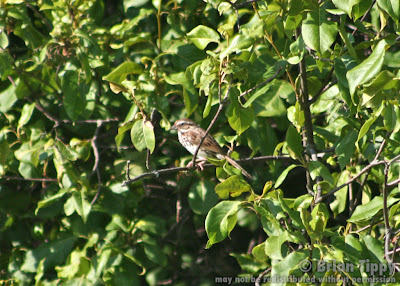 This bird has stumped both my father and me. It appears to be a sparrow, and could be a Vesper Sparrow, but the stripe over the eye is much too pronounced. It’s possible that it’s some kind of immature plumage.

Or, it’s an entirely new kind of bird and I can retire once the internet takes notice of this photo. Either way. 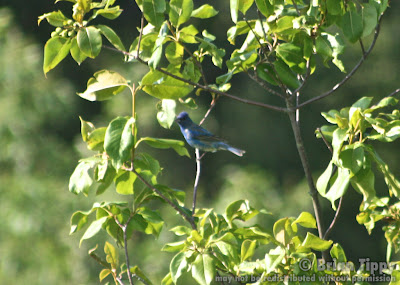 It’s apparently quite easy to find Indigo Buntings on this campus. It seems I just hadn’t noticed them at all last summer. This summer, I couldn’t walk around without bumping into them. Unfortunately, they’re a little too shy for my 75x300 telephoto, so I can’t seem to get a better picture than this. Alas.