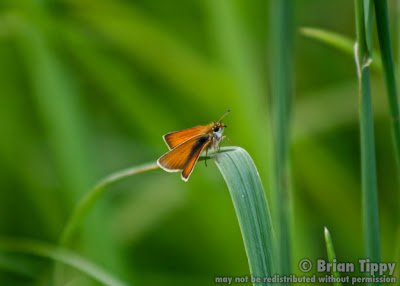 I don’t know exactly what kind of little butterfly this is, but when I went back through the tall grass into the woods to look for birds again, there were lots of these guys scattered about. The telephoto might not be the ideal lens for bug photographs in a lot of ways, but it certainly lets you pop your subject into focus on a blurred background.

The sun also made for good colors.

My Dad guesses European Skipper. Sounds good to me. 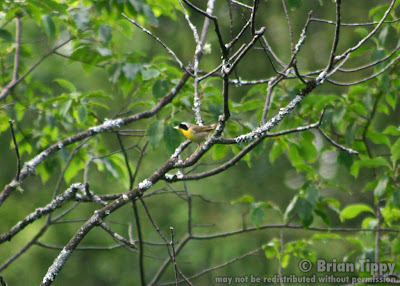 As I was at the edge of the meadow and the woods, I heard the Indigo Bunting calling again, so I stopped to try to stake him out. As I waited, I was treated to the sight of this Common Yellowthroat, also singing for territory and hopping around.

Yellowthroats are apparently pretty shy, and I had never even heard of these before, much less seen one, so I felt lucky. 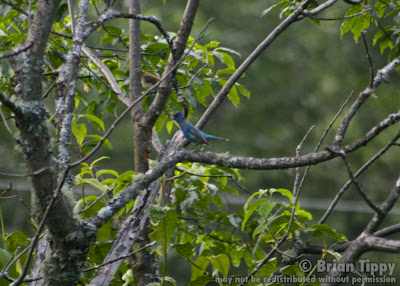 I didn’t get wonderful pictures of the Bunting this time (or last time either, frankly), but you can see from his posture that he’s singing his little heart out to stake out a claim. It’s possible, even likely, that there are multiple males trying to stake out territory. It certainly sounded like that.

Just up and too the left of the Bunting is probably a female of the same species. They’re quite drab in comparison to their husbands and even harder to spot. I didn’t even realize I had gotten a picture of her until I saw the photo. 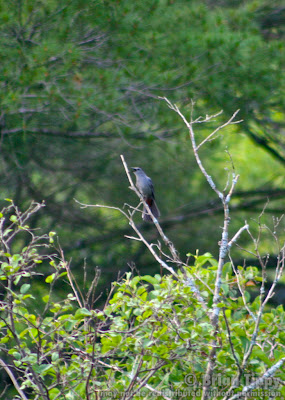 After I left campus, I was feeling a little down, so I stopped by a little trail that’s about a mile down the road from the Bread Loaf campus. It’s called the “Robert Frost Interpretative Trail,” and it features selections from Frost’s poetry along different points. I admit that even though I love the poetry of Frost, I’ve always found the idea of the trail a little cheesy, and I’ve never walked it precisely for that reason.

But, it was right on the road, the lighting was decent, and I wanted to look for some birds. Right at the beginning of the trail is an open wetland area, and though there was no life when I first walked out to it, a few minutes’ patient waiting yielded this Gray Catbird, who flew out to an exposed branch to sing.

Catbirds, incidentally, are great imitators, and though they don’t typically reconstruct as complete copies of songs as Northern Mockingbirds and Brown Thrashers do, they have pretty complex songs nonetheless. 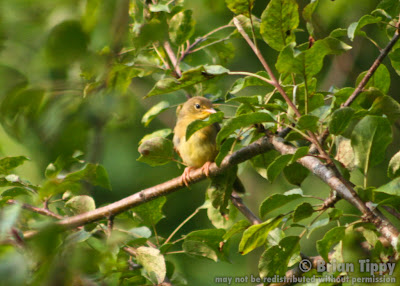 I only spent about twenty minutes on the trail, since “I had promises to keep” and a few “miles to go before...” —well, you know the rest. I found this shy bird on my way out. Identifying her is a little difficult, but my best guess is that she’s a Female Orchard Oriole.

A lovely and demure thing, isn’t she?