Today I tried to leave Bread Loaf, but Nature herself conspired against me. The Bread Loaf campus is nestled halfway up a mountain range about ten miles southeast of Middlebury College. Route 7 winds southward out of town, and Route 125 goes east up through Ripton and over the mountains, paralleling a small river most of the way. This morning, the very last morning of classes, I and my two roommates, Jamie and Zach, headed up for our 8:45AM class.

It’s been a particularly rainy summer, and this past week had alternated downpours and thunderstorms with very few breaks. This morning, a steady, overnight rain meant that on our way up, we saw the river at a rather scary height. It was a brown, churning flood, rather than the clear, sedate winder we were used to greeting each morning. In places, the road itself had a couple of inches of standing water, and it was clear that the banks weren’t quite containing the river. Nonetheless, the road was completely passable, and we went to our class without much trepidation.

By the time we tried to leave at 10AM, the buzz on campus was claiming a total closure of Route 125 on both sides of Bread Loaf. Zach, Jamie, and I all needed to get back to the house, so we jumped in my intrepid Jeep and went to see for ourselves.

The first thing we noticed was that the Frost Road, a dirt road which heads uphill, straight as an arrow, north off of 125, had largely washed into 125. That meant rocks from the size of pebbles up to cobblestones, along with enough dirt to surface a road were all sitting on the pavement. We passed this with a few nervous comments but no trouble. 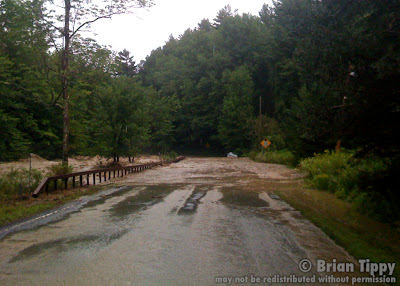 A little further down the road, though, just before the town of Ripton, we were greeted with a number of stopped cars, just beyond which was this scene.

In the ninety minutes we spent learning about Chaucer (or in Jamie and Zach’s case, “Imagination”), the river had jumped its banks and gone running down the road—not just a few inches of standing water anymore. What you see in this photo are rapids several feet deep running down the road itself. I’m estimating the depth based on that black Ford Focus that’s been pushed off into the ditch.

Obviously, we weren’t getting down this way.


We backtracked and turned off down the Goshen/Ripton Road, a dirt road that the atlas showed as an alternate route off the mountain, but about a quarter mile down we came to a section that had been half carved away by a tributary of the flooding river.

While the road was still just wide enough for the Jeep to pass, all three of us suffered through the mental image of the carved edge giving way under the tire and dumping us all sideways down into a roaring waterway.

At this point, Jamie and Zach decided the best bet for them was to go back to the campus and wait for better, safer conditions. I dropped them off, but I was rather desperate to get down, and with more rain on the radar, it seemed as if any more delay could strand me at Bread Loaf for days. I had vacation plans, and I wasn’t about to get held up.

I knew the road to the east of campus was far worse and had washed out earlier, and I knew going up over the mountains and down to the other side was probably impossible in addition to being impractical (it would have taken hours to drive around back to Middlebury). However, to the north of 125 are a series of dirt roads, beginning with Maiden Lane, which eventually wind down to Lincoln, a town to the northeast of Middlebury.

So, I pulled the atlas back out (for those of you wondering why I wasn’t on the iPhone plotting routes with satellite imagery, let me remind you that there is no cell service in these Green Mountain Wilderness areas), and looked for routes down.

My first thought was to take the dirt roads around the washout we had seen. My assumption was that the paved road (125) was still the most likely safe, direct route if I could just get around the one place it was impassable. I successfully got around the pictured washout and all the way to the town of Ripton, which is about the halfway point down the mountain from Bread Loaf. However, just down from Ripton were far more severe washouts, which I never saw, since emergency services had managed to get as far as Ripton to close the downward road.


So I turned around and headed back up the ridge to the north. Every dirt road that turned westward toward Middlebury was washed out or otherwise impassable, and after three fresh dead ends, I finally ended up going due north for almost an hour before I was able to cut over to Route 116 on Notch Road. It isn’t labeled on this map, but it’s west of South Lincoln. 116 brought me down to the end of 125 where it joins up with Route 7 to Middlebury itself.

I got to the house to find another roommate, Liz, who had tried to go up the mountain at about 10AM for her class and simply couldn’t.

Frankly, the weather was more reminiscent of my class last year (Theories of the Sublime in Romatic Poetry by Men and Women), but certain passages in “The Miller’s Tale” from Chaucer’s The Canterbury Tales also resounded with the idea of a flood, if not as specifically with the terrifying power of natural forces.
Posted by Brian at 10:00 AM