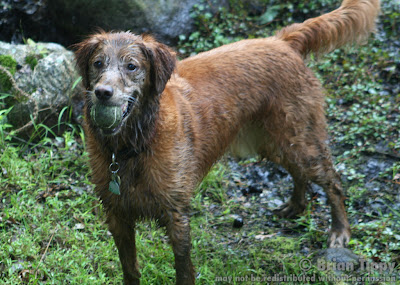 Jeremy and Naomi live on a small lake created by a rather interesting glacial-geologic phenomenon. Alas, this is not the day for glacial-geologic photo essays (been there), but it’s rather a day for discussing the area right next to their little beach.

It’s a cute, sandy beach with its own dock and canoe, and to the immediate left, as you look out at the lake, the shore becomes mud—a special kind of rotten leaf muck. Left to his own devices, Gus will take a tennis ball and squish it into the mud with his front paws and then dig it back out, over and over, until he looks like this. 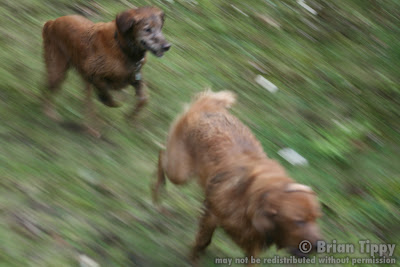 Comet would like nothing better than to be chased by Gus, and he recently discovered that if he grabs Gus’s tennis ball, a chase will ensue. Since is was a dreary, gray day, there wasn’t enough light for dog action pictures. Still, watching them streak across the yard is a pretty blurry enterprise in real life, so why should the photo be any different? 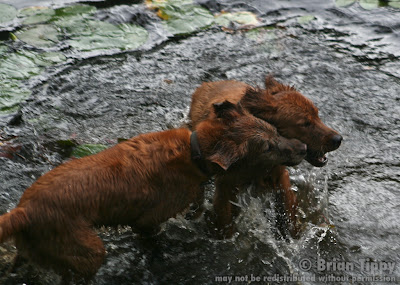 Comet, true golden that he is, loves to end the chase by running into the water for a good, old-fashioned splashing romp. No, they’re not really fighting. Gus is trying to knock the ball out of Comet’s mouth, not bite him. This kind of play-fighting does look pretty ferocious, and it occasionally results in a high “ouch” bark from one dog or the other. Even when that happens, though, the fighting just stops for a moment and resumes pretty quickly. It’s not like a dog to hold a grudge. 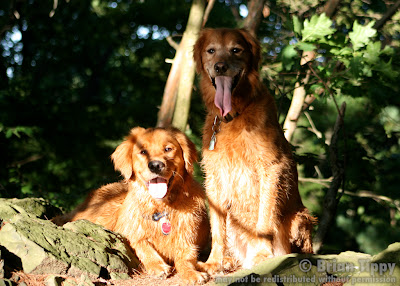 Lighting is pretty crucial, particularly as the days lengthen (yes, even in late August), and the light gets less than full as the afternoons wear on. It’s just after 5PM here, on a sunnier day than our trip to the lake, though the dogs are wet in this photo too, and the light coming across wasn’t quite enough to illuminate all of both of them.

Goldens have a double coat, and it’s that two-layered characteristic that gives them their particular look. The longer, shinier “guard” hairs are darker (particularly dark on these two), and they help repel water. The undercoat is made up of fluffy, lighter-colored hair. In direct sun, even when damp, dark Goldens like these two shine in reds, oranges, whites, and golds in all the variations of wetness and the angles of light.