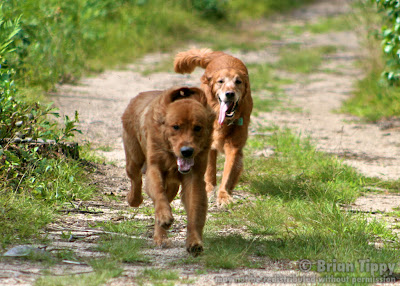 Right across the street from the cabin is a protected pine barrens area. They’ve done a controlled burn and what looks like some selective logging in the area over the past few years, so it’s a little bit of an odd, tiny wilderness area, but it’s a great place for dogs.

Now that Comet’s full size, he and Gus will race. We take them on leashes across the street and up the first few feet of the path, and them have them stay while we unclip them. When we let them go, there’s this breakneck steeplechase of twin Golden butts pounding away from us. Once they get around the corner, I whistle them back, and there’s a renewed competition on the way back. 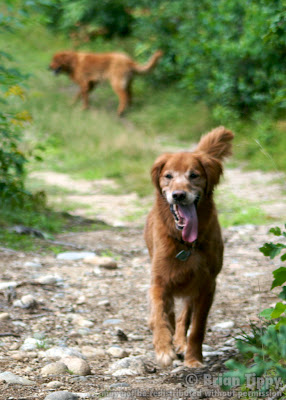 Comet’s gotten as fast as Gus at this point, and it’s an odd thing to watch what was once the fastest Golden I had ever seen get slightly outpaced from time to time. Gus has been suffering from allergies a bit this summer, so it’s possible he’s not putting his all into it. But Comet is a darn fast dog too.

There doesn’t seem to be any way to truly compare their speeds, though, since Gus only runs full-out for tennis balls—regular trail joy doesn’t quite coax out his top speed—and Comet won’t compete for tennis balls, since he never once beat Gus. Now that he has a chance, he doesn’t know it.

I’ve been careful not to put them in direct competition for balls very often, since I didn’t want Comet to decide fetching was pointless, but he won’t try for it if Gus is going too.

So the question—who’s the fastest Golden alive?—will remain unanswered for the time being. 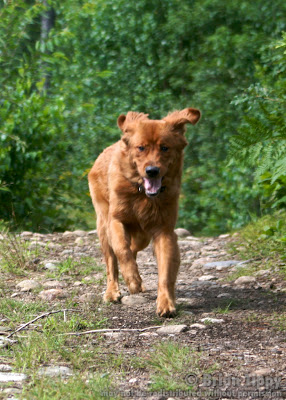 What is it about a dog bounding back on the trail that brings the whole experience to life in a completely different way than a solitary walk in the woods? I’m not knocking a dog-less walk, since there’s a special beauty in being alone in a quiet place, and you certainly see more wildlife when you don’t bring a noisy, snuffling, jangling, sprinting companion (even one that’s trained not to chase birds and squirrels).

A dog lives in the present moment, free from the kind of specific, reflective memory we have and free from the forecasting logic of the future that hovers over us constantly. I hesitate to idealize that kind of mind without reservation, since it is precisely those qualities that enable us to better ourselves, to think morally about our actions, and to appreciate art, pain, and beauty.

However, I do like to share in those qualities when I see them in a dog that loves me in his own pure, limited way and runs back to me with fresh joy when I whistle that particular falling sound (stolen from hermit thrushes and my mother’s father) that Gus and Comet both recognize as a call to attend and return.

They seem to be able to contain the contradiction of wanting to run back to us and wanting to run ahead to new territory. The dogs sprint to return, but as soon as they’re told they’ve come back far enough, they wheel and sprint away down the trail. I wonder if a human being could ever simultaneously want to go backwards and forwards in space or in time without experiencing at least a little cognitive dissonance. Or perhaps there’s no cognitive dissonance when there’s no complex cognition in the first place. 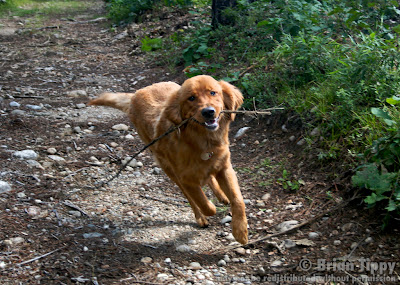 Did I mention I get a stick brought to me on some of those returns? I think the stick brings down my whole reflective metaphor like the Jenga tower it is. A dog makes gifts out of a run back to you, a look, a moment of time, and anything he can pick up on the side of the trail, and he wants you to throw it so he can bring it back to you and give it again and again and again.