Blogger isn't great with video, so this is the best I could do in converting the original, much larger video of this photo sequence. 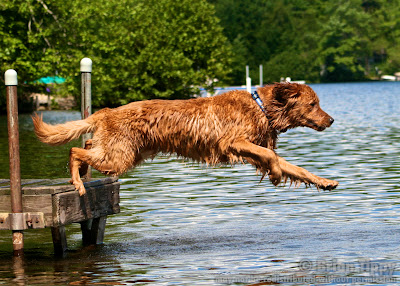 Over the course of a couple of days of dock jumping, Comet made the transition from hesitant, awkward slips into the water to stretched-out leaps as far out as he could. This is about the pinnacle of his jumping. 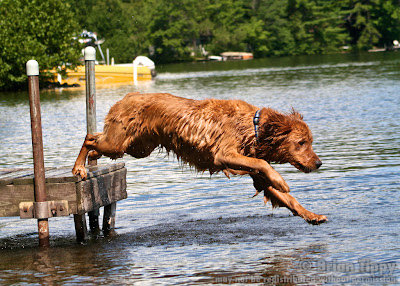 When he started out, though, it was a bit more like this. We didn’t take pictures of his truly hesitant first jumps, but you can see even here, once he’s had a little practice, that there’s a little bit of worry about crashing into the water and that he’s treating it as as if he needs to have a paw out to land on. Even though this isn’t one of the first jumps, it’s still a pretty impressive difference between the two. 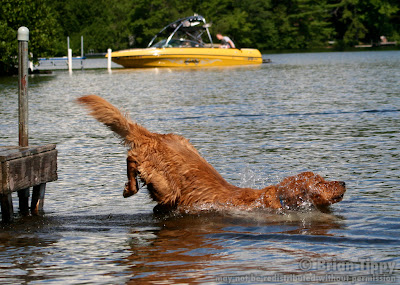 Landings got quite a bit better too, from careful slips into the water.... 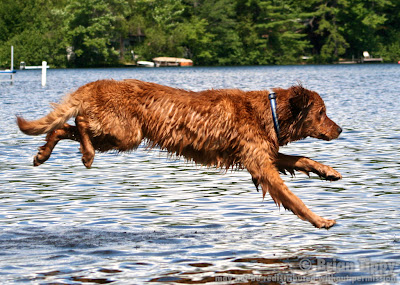 ...to full-bodied crashes into the water, with the eyes focused on the target. 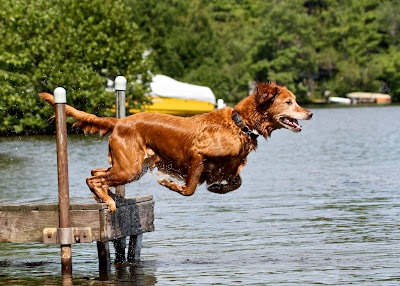 Gus is, as always, a consummate jumping professional, even as he gets older. He’ll throw himself as far as he can, over and over, until he’s exhausted and dazed. Part of taking care of him has always meant knowing when to make him stop. 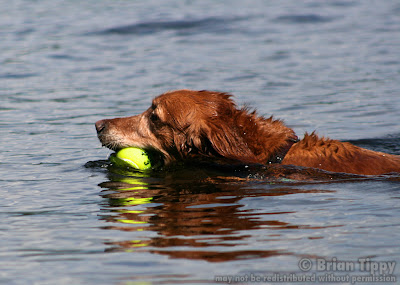 Of course, the entire point of the jumping is to fetch the ball, or the toy, or whatever it is that we’ve thrown into the water for them to bring back.

Fetching is the epitome of an action done for its own sake, an undertaking whose entire point is the process itself. The dog doesn’t bring back the ball and then wait to see what will happen. He doesn’t bring it back and then take a coffee break. Once you pick it up, he takes a few careful steps out ahead, waiting for you to throw it, and hoping you will so he can enter into the process again.

A dog takes simultaneous joy in motion, in connection with you over an activity that he’s absolutely sure you want him to do. 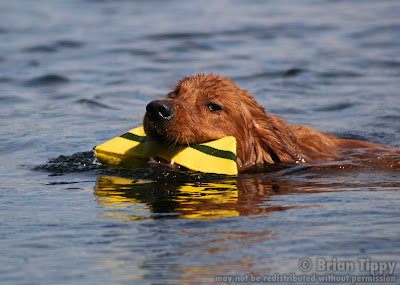 Gus is so good at fetching that he’ll get to tennis balls before Comet most of the time, in or out of the water. The solution is to throw a ball as far as you can, which Gus will chase and Comet will immediately write off as a loss.

Then you can toss something Comet likes but Gus cares a lot less about (Gus will prioritize tennis balls over anything else, including treats, things with squeakers, live birds, anything). Then Comet gets to bring this squeaky bumper thing and Gus gets the ball. It’s a nice arrangement for the dogs, but a little complex and wet for the thrower.

As you saw in the video, though, sometimes Comet does get the ball. 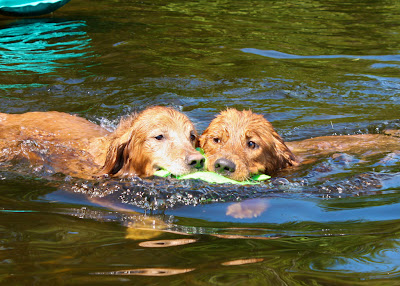 Sometimes, though, you just have to share, especially when we think Gus is too tired and we’ve put the tennis ball away. Then, grabbing the floating turtle is anybody’s game.