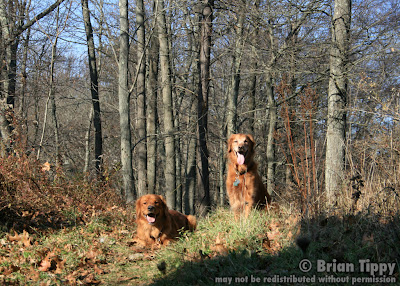 As the days grow shorter and shorter, it gets harder and harder to get anywhere with the dogs between work and sundown. Fortunately, the early hours of the school day mean I've had enough time until now to grab those few sundown minutes of cold light.

Today, though, was a lazy Sunday, so we had the prime daylight hours to spend together in the woods. No need to rush, though the dogs took every opportunity to spring up and down the trail. I, however, strolled and kept a look out for birds. I even spotted a couple of deer off across the meadow. They were downwind, so while the dogs missed them completely, they took off once they smelled us, too fast for me to swap to the telephoto. 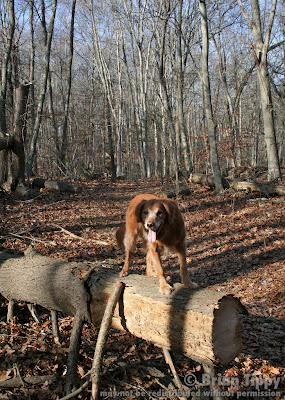 Goofy Gus was more than willing to jump up on a log and pose. It was really nice to see him feeling more like his normal self, since he’s been sick. A couple of weeks ago, not too long after his sixth birthday, he started looking lethargic and lacking appetite. His eyes were a little weepy, as if his tear ducts weren’t clearing them, and, scariest of all, the lymph nodes in his neck swelled up.

I took him to the vet the Friday before last, and she was very concerned about the lymph swelling. She was even more concerned to find that other lymph sites were also moderately swollen. She took needle aspirates (tiny bits of tissue pulled out by a needle) from two lymph sites and sent them out to the lab, along with a blood sample.

She wanted to test for canine lymphosarcoma (lymphoma), which is unpleasantly common in Golden Retrievers. While it’s treatable with chemotherapy, the medicine usually only buys the dog one more good year with a high quality of life. Learning that Gus might be getting a countdown timer was obviously upsetting, and I’ll admit with some embarrassment that I was kind of a wreck about it.

After a stressful weekend last week, we received the results of Gus’s tests, and it looks like he’s in the clear. We’ve started him on antibiotics and the lymph swelling has come down dramatically. His appetite seems to be returning to normal (he’s never been much of an eater), and his energy level is getting back to where it belongs too.

So it was no trouble for him to hop up on the log and stay there for a minute while I snapped a few photos. 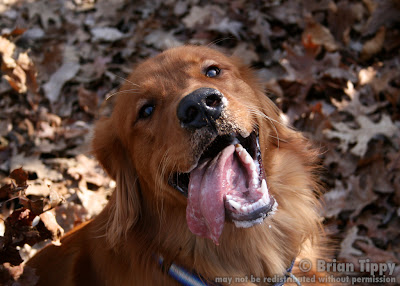 Comet remains unrelentingly, unremittingly Comet. It’s around forty degrees out on this walk, but the sprinting has left this goofy, sloppy dog covered in froth.

Gus is now a middle aged fellow, and though he’s as intense as ever about tennis balls and walks, he never had exactly the kind of silly exuberance I see in Comet. Gus has always seemed so purposeful, so driven, even when all he’s doing is running up and down a trail or a beach, smelling and rolling. He pursues joy like he’s under contract.

Comet, though, lacks either the attention span or the sense of gravitas, or both, and he does everything wholeheartedly, bouncing from smell to smell as the spirit takes him. 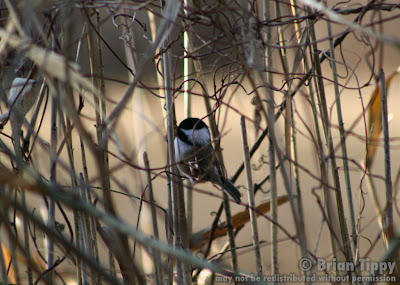 The only sign of life, aside from the deer and a heron far down the marsh, was this lone Chickadee. He called his little heart out in these reeds, but I didn’t hear any call back.

A lonely Chickadee is a little bit sad, but I hope he had some family up in the high trees. 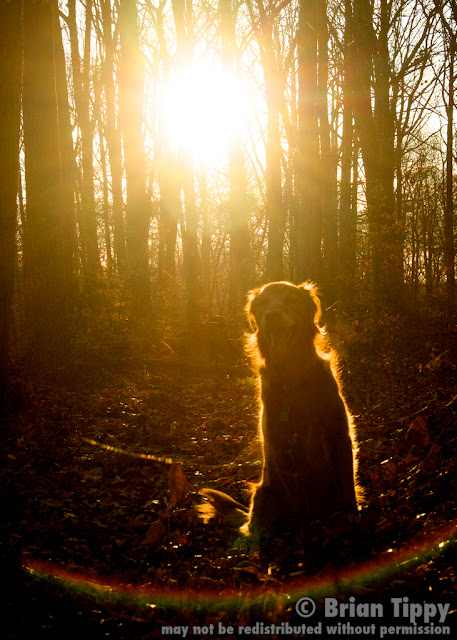 I snapped this picture earlier in the week, on Thursday, a day we truly had to hurry to catch the last light of the day. We had started Gus on the antibiotics the night before, and he was already perking up, so I sped home from work just in time to catch the last hour of sun and the dusklight that’s bright enough for walking in the woods.

I’ve spent a long time these last six years teaching this good dog to stay reliably, and I realized that the time might come that he might not be able to obey that particular command.

The reprieve from the lymphoma diagnosis notwithstanding, I was reminded of what brief, bright creatures these dogs are and how powerless we are to call “stay” when we most mean it.

Come what may, though, I’ll always remember my sundog at his best.