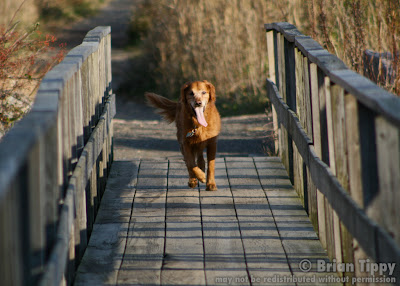 This picture was taken two days ago on the Trolley Trail, when Andy and I took the dogs out in the shoreline’s cold November air. It was the day after Thanksgiving, the early afternoon, and already the sun was low in the sky, maybe ninety minutes from touching the horizon.

The lighting was totally uncooperative for photos, so this was the only good shot I got of the day, as the low sun came between the slats of the railing and lit up Gus’s white face. He looks just fine in the photo, but there’s something that still not quite right in his health.

It seems very unlikely at this point that he has lymphoma, though the tests weren’t totally conclusive on that score. The fact that his lymph nodes calmed down once he was on antibiotics is really encouraging, but he’s just not himself, especially the last few days. In fact, his lethargy is almost as bad as it was when his nodes were swollen, and he has lumps, almost like bug-bites, in a collection on one hip and scattered a few other places. His eyes still don’t drain quite right, though they seem better. His right eye is still a little swollen, though, so his gaze is slightly lopsided.

He’s also sneezing like crazy if he runs around or sniffs at the ground outside. I’d write it off to a cold if it hadn’t been going on so long.

He still perked up when I left the house today: he stood by the door and stared at me, which is his normal way of demanding to come along once he’s seen me put shoes on or heard me grab my keys. He’s still eating fairly normally and better than he was a week ago. I’m probably just getting worked up over something fairly minor. Ah well...such is the fate of a dog dad.