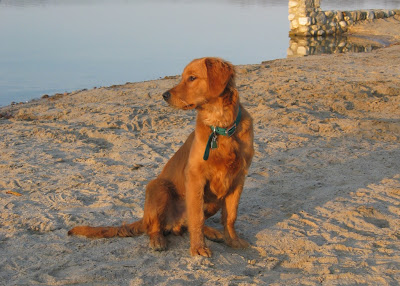 I was going to write this entry with no pictures at all, but it seemed too dark, too bleak. So I went back to this picture my Mom took at Easter 2003, to buoy me up a little while I wrote. Gus’s condition has gotten yet more mysterious and the future harder and harder to see.

Around 1PM, Andy noticed Gus was disoriented. He seemed confused about the stairs after going out and stumbled a couple of times. Andy called the animal hospital and took Gus out front of the house to get him in the car. Gus walked in between a garbage can and a cardboard box, and hit the box as if he didn’t see it.

It’s incredibly hard to gauge to what degree Gus is confused and to what degree it’s an issue with his sight. Both options are terrifying in combination with the other symptoms. It’s clear that he can see a little, at least out of his left eye. But his right eye, the one that has a couple of mystery lesions above it, looks deformed, swollen, and terrible. The cardboard box was on his left, though, so he may be having balance issues or some other kind of disorientation.

Andy observed similar confusion and difficulty seeing again at the animal hospital: Gus couldn’t figure out the door and tried to walk through the glass next to the door at first.

He waited quite a long time, so I was able to go straight from work and meet him at the hospital, where Gus greeted me and we waited to see the doctor. The surgeon who removed the lymph tissue and lesion for biopsy saw us, and she was completely flummoxed, as was the veterinary oncologist she called to consult. The damn biopsies won’t be back until tomorrow, so even though she examined him again head to toe, there was nothing she could do for him. She was able to ascertain that there is nothing structurally wrong with either eye, including the intraocular pressure in both of them.

We need to wait to see the biopsy results tomorrow. In the interim, she’s added Clavamox to regimen, since he improved on that before. We’re also giving Benedryl, because that’s one of the initial treatments for some of the cancers he could have, as well as the now unlikely diagnosis of allergies. The most likely culprit now is cutaneous lymphoma, a rare form that causes tumors on the skin. Mast cell tumors are also possible.

When we left, I saw what Andy was saying about his blindness. He had difficulty finding the edge of doorway out of the hospital, and when he tried walking down the stairs to the parking lot, he stumbled as if he couldn’t see where he was putting his feet. He caught himself before I had to, so it seemed more like a vision thing than a balance thing. I saw a similar lack of coordination when he took the stairs back into the house.

Now we wait. Gus is sleeping next to me, pulling air a little laboriously through a stuffy nose. The biopsy results hang out there in the dark, creeping closer, and I dread them as much as I can’t wait for them.