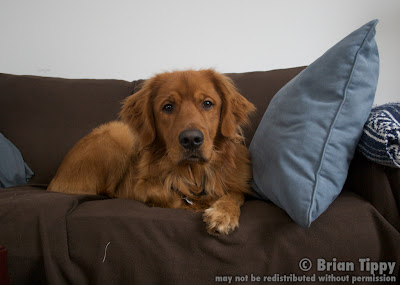 It snowed huge on Friday, then dusted on Saturday, and now it has snowed again this Sunday morning. Well, it’s been really more of a wintry mix, but Comet’s not discriminating.

He’s already been in the snow once this morning to frolic, but back indoors, he questions my motions. Am I fumbling with the camera so I can put it in its bag and get ready to go, as I so often do? 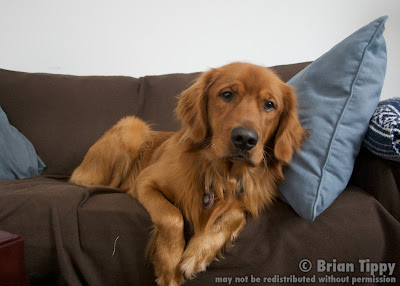 No, I am not. As Comet begins to realize the inevitable truth that it may be an hour or more (gasp!) before he is returned to the snowy wonderland, the will to live slowly leaves him. 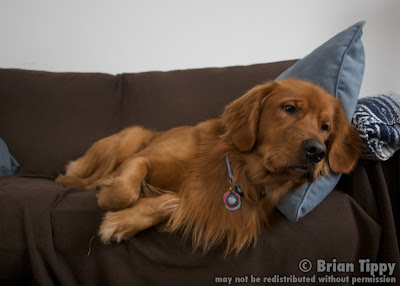 The weight of the world settles down around him; his life-force ebbs. He gives his very best existentially drained look off into nowhere. 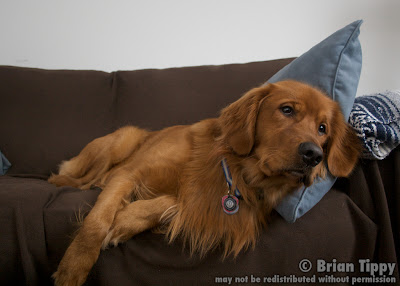 I swear he’s checking to make sure we’re observing the drama. It’s not good guilt-tripping if we’ve stopped paying attention. The reason he’s not looking at the camera is that it’s on the coffee table so it can be stable enough to take low light, non-flash pictures. He’s looking at me and I’m reaching down and snapping pictures with my left hand. 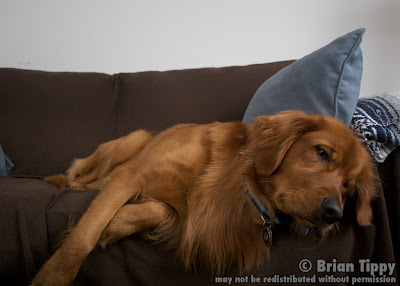 Now he’s throwing himself fully back into the role. And he’s hanging improbably far off the couch. This simply isn’t sustainable drama, at least in terms of the biophysics. He has to fall off the couch or give up the game. 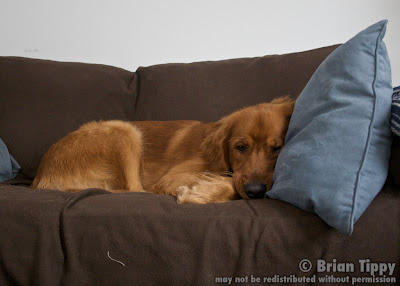 He gives up, pulls himself back onto his couch, and dozes, still chock-full of drama, at least one eye open continually. He must wait until we move, or jingle keys, or otherwise indicate in any way that we might be going outside and taking him with us. Until that time (probably 1/2 hour from now), he will wait, vigilant, ever ready to do his job and show that snow who’s boss.

On a more serious note, he does seem to be holding up OK despite Gus’s absence. He still checks for his old friend once in a while, and I’m sure he would much rather play with Gus in the house than go out in the snow alone, but he’s adapting well to this one-dog household. We’ve been careful to spoil him rotten and keep his days active. I’m glad the weather has cooperated so nicely (even if it makes it hard to go get eggs in the mornings)!

Just for fun, a short video of Comet’s dramatics, combined with some lovely waiting music: