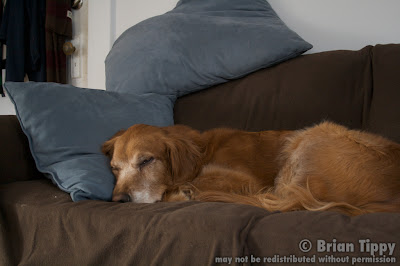 Gus’s lymph nodes swelled up again once the antibiotic course was done, and his energy level went back to almost zero. More and more of the mysterious bumps appeared.

We went back to the vet for more bloodwork, and he tested positive for one of the tick-borne-diseases (TBDs), anaplasmosis. It’s quite treatable, so he’s on a four-week course of doxycycline, but it unfortunately doesn’t explain the lumps, and lymphadenopathy isn’t particularly common with anaplasmosis.

So, we scheduled biopsies for both the lymph nodes and the mysterious lumps. That procedure was yesterday, and Gus spent today on the couch recuperating, with big shaved patches and Frankenstein stitches (not visible here) on his back and leg. 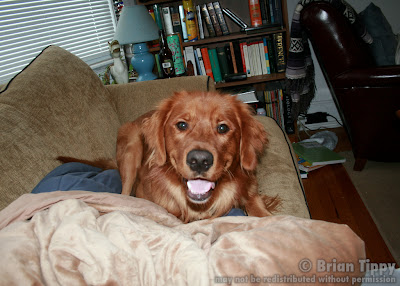 Comet can’t quite understand why Gus can’t play and we won’t go anywhere. He’s being very well behaved in terms of leaving Gus be when he’s told to, but he’s pretty confused.

We’ll hear about the biopsies early next week, but for now we’re trying to keep Gus’s weight up with canned food, and we’re giving him the doses of doxycycline and hoping for the best.