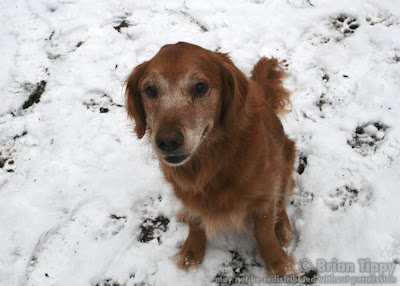 Last night it snowed, and since we were up late, we took Comet for a walk in the falling snow in the wee hours. He was so good all day, even though he was bored, that he deserved a little treat of his own. He romped and ate snow and had a ball.

This morning, there was still a little snow on the ground, so we took both guys outside. You can see that Gus’s face doesn’t look quite right, since there are lumps over his right eye and on the crown his head. And he has a perpetual pre-sneeze face, since he’s pretty stuffed up still.

Despite all his problems, he perked right up in the snow and had a good, if quiet, time. 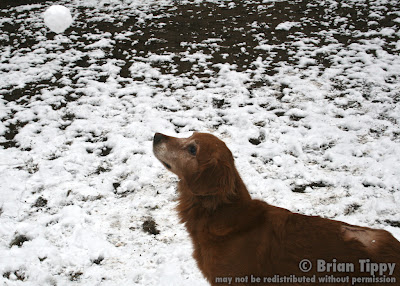 Andy made snowballs and lobbed them to Gus, who was his old self for at least the time it takes a ball of snow to arc and fall. The cut on his back is forgotten for a moment and he spots the ball, judges it, gauges it... 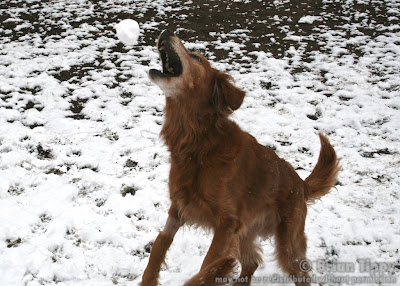 ...and snap, he’s Gus again, healthy enough to rear up and grab it from the air. 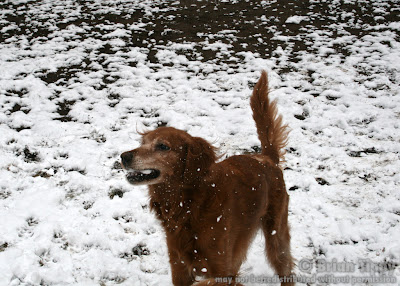 And then the delicious, crunchy, cold reward.

He’s nowhere near healthy right now, but despite his surgery, he seems a little more happy and active than he was before we started the doxycycline. Fingers crossed.