Snow Flies When You're Having Fun 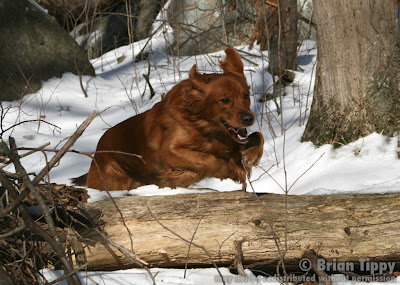 While this entry is dated only a week after the last one, the untimely death of my hard drive delayed its posting substantially. Fortunately, we had invested in Apple’s wireless backup solution, so once the computer was repaired, I was able to get everything back and continue on as if nothing happened.

In the last few weeks, we’ve made quite a habit of returning to this same loop past the icicles and over the logs, and while today wasn’t as much of a day for icicles as last time, it was much, much brighter out, so it was a better day for action photos. 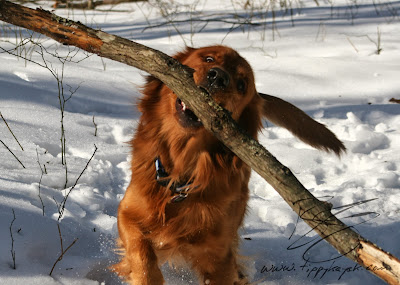 With the bright light, it was a great opportunity to get pictures of him parading around proudly with big ol’ sticks, since icicles were a little harder to come by today. 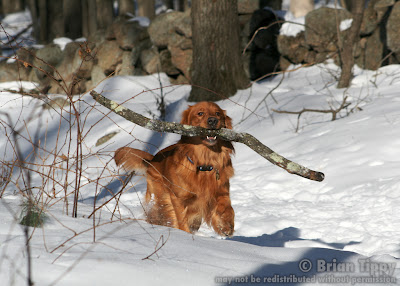 There’s a particular thickness of stick that really gets him going, and he’ll go to great lengths to bring a perfect stick with him as long as he can. He runs out ahead, flops down, and spends some time chewing while we catch up. Then, he springs up and runs off again with it. 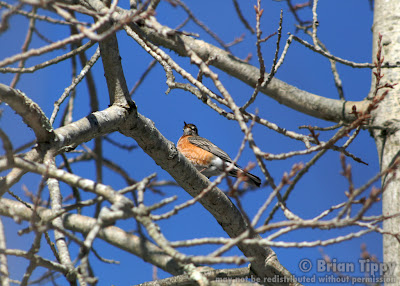 At the very beginning of our walk, we found a group of Robins, apparently males staking out territory. While it’s rather early for them to be coming back from the south, it’s apparently a good risk for them to get the best territory. 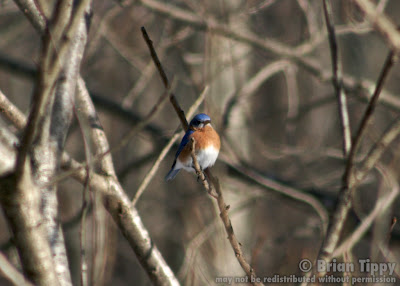 Among the Robins, almost escaping our notice, this Eastern Bluebird was chirping a slightly different song of territoriality. I almost missed him, with a breast so similar to the Robins’. Even though he was a bit more easily spooked than the Robins, he was kind enough to pause for a moment so I could snap a quick shot.
Posted by Brian at 3:00 PM No comments: 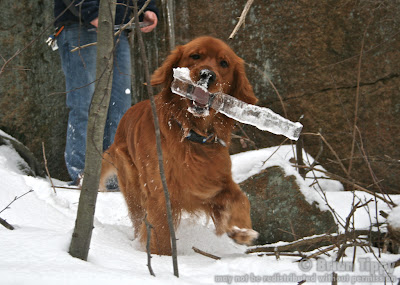 Andy, Comet, and I discovered, on one of our favorite walks, that the high rock walls of the old quarry produce the most fantastical ice sculptures, mostly in the Late Icicle style.

Comet, who will come running to beg for ice cubes if he hears the freezer open, is in Ice Dog Heaven. If the chunk or icicle is thin enough, he’ll crunch through it right when you hand it off. If it’s thick enough to survive the crunch, he’ll carry it around like it’s a stick.

I, who experience occasional tooth sensitivity from ice cream or cold drinks, cannot understand this behavior even a little. 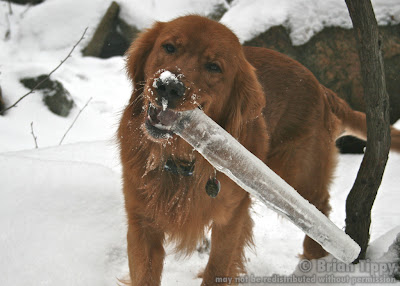 He’ll do his best to carry even these huge chunks of ice, and he parades around with them with such pride. It’s fun to watch him get so wrapped up in it. He prances back and forth, showing off his frozen treasure. 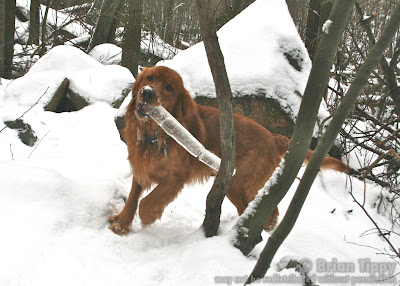 Sometimes he gets so wrapped up, in fact, that he doesn’t quite realize how wide he is with the ice in his mouth. Either that or he’s deliberately shortening this one to make it easier to carry.

You know the old saying: “If you can’t carry the ice easily, and you can’t shorten it with your teeth, just smack it against a tree.” 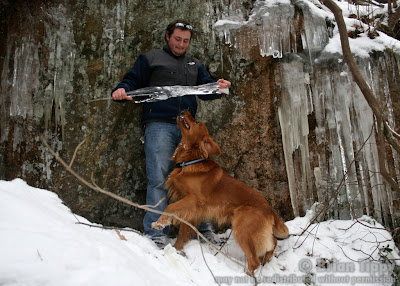 Andy happily feeds Comet’s ice habit by pulling down huge icicles and sending him off running with them. 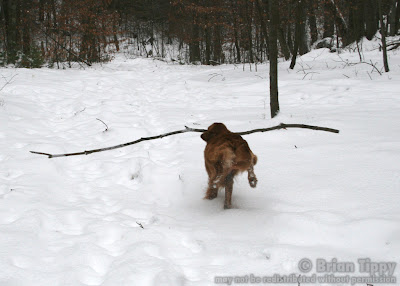 Fear not: sticks have not been forgotten. Comet often grabs sticks that are frozen to the ground, attached to trees, or far too large for a dog to move, but once in a while, he strikes gold, an enormous stick that he can nonetheless balance and carry for a while. Of course, once he reached that little copse, the stick had to go. 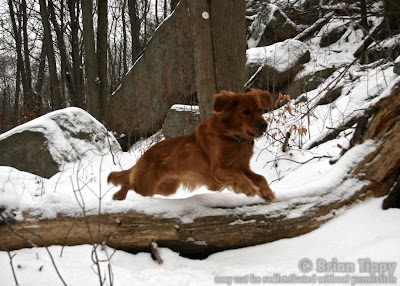 The lighting wasn’t too great today, since it was still rather overcast. Still, there was just enough for an action shot, so as Comet sailed over this snowy log, I snapped a few pictures. We asked him to run back and forth a few times so I could take a few attempts at catching him in the less than ideal lighting.

There’s nothing better than watching him soar through the woods. 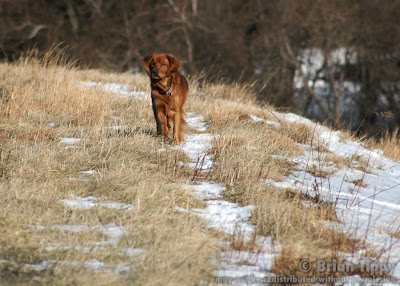 I haven’t written in a little while. I’m hardly regular in putting up entries, and there have been far longer gaps, but this time is nonetheless a little different. There are photos from walks and even a trip to the zoo since I last posted, but I couldn’t bring myself to write again.

I wrote twice after Gus died about Comet-specific things, investing in his life, rather than playing it cool, as a way of thanking Gus for all of his lessons in joy. And Comet obliged by being quite silly. But now...now, it’s been a couple of weeks since Gus died. We picked up his ashes from the veterinary hospital, and they’re sitting in a lovely sealed wooden box on the bookshelf, waiting to be scattered someplace he loved. 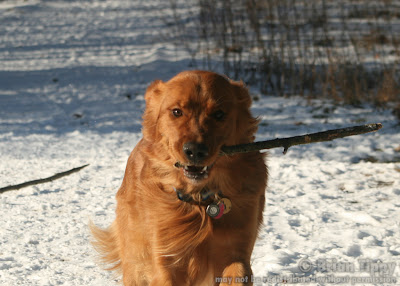 Now, it seems almost disloyal to go along with business as usual, to take pictures of one dog where there once were two. Just a walk, no special event, no particular Comet silliness to report on. But nothing would be less loyal to Gus than to forget to take joy in wind and fur and snow, so I’ll take another crunchy cold step, snap the shutter a few times and sit back on the couch and write about it.

Photographing Comet has become the art of capturing his expressions, since every stride of a run offers the whole range of canine emotion from snarly to droopy. My favorites are the ones, like this one, that defy easy anthropomorphism. He’s certainly not angry or in pursuit of some poor prey; he’s just bringing a stick that he picked up and thought I would like when I whistled for him. I think the closest English, my impoverished mistress, can come to describing him is as fiercely happy. 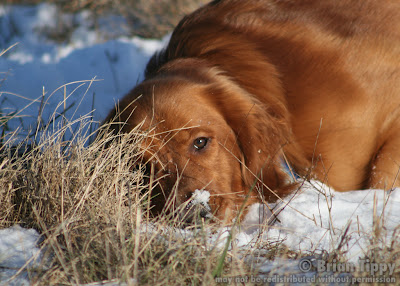 What thoughts roll through the mind behind that brown eye at these moments? Capturing an expression means capturing a moment from a motion, and when he puts his head down to roll in the snow, there’s a whole range of shapes his face takes. There’s attention on me, but there’s plenty more attention to the soothingly cold powder he’s grinding into his coat. 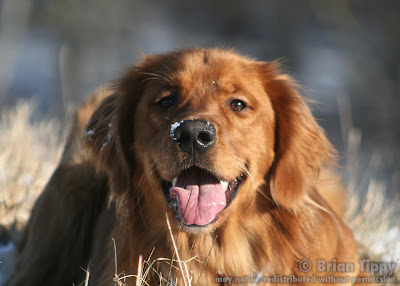 When I was a kid, you had to squirt flavored, colored corn syrup into snow to make it this exciting to me. I think this is nose-cleaning rather than lip-smacking, but the principle is the same. 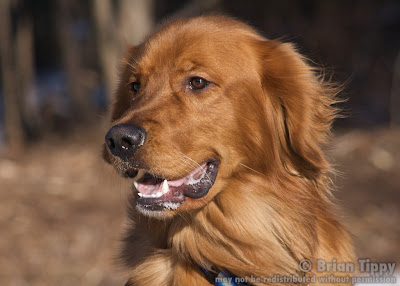 And now the nobility. Pay no attention to the small amount of frothy slobber collected on his lip. That’s simply the price of the intensity with which he lives. Still, the overall effect is quite handsome and respectable. When I think fondly of Comet, this is the dog I see. 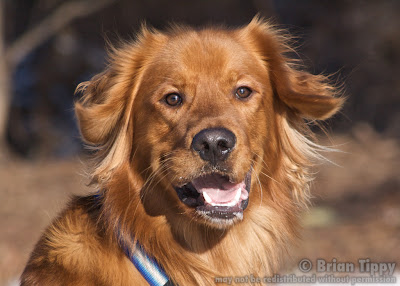 This, however, is much more like the real Comet who, even when he’s still, is always in motion. Hair, ears, mouth all akimbo, caught in the wind and in the momentum of his head’s turning.

The real Comet is one part noble and one part dopey, with plenty of other stuff thrown in, but it’s not the dopiness that sums him up here; it’s the motion. He lives life without a break. Even when he sleeps, he dreams running jungle dreams. When he waits, it’s with an anticipation of motion so strong that it’s a kind of motion itself.

So how could one watch him, photograph him, and reflect on him and stay frozen in grief?