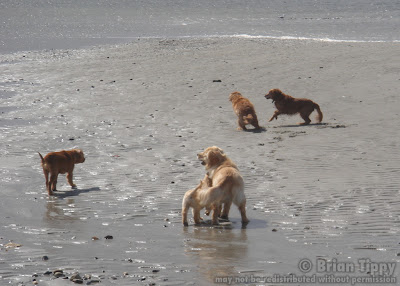 Over the last couple of days of my spring break, Andy took off of work, and we went up to Maine to visit my old friend Jill. Jill has three Goldens of her own, the oldest of which, Finn, is Gus's littermate. While this isn't the most dramatic and wonderful of pictures, it is the only one in which I got all five dogs in frame.

On the left is Comet. The little puppy close to center is Tango. The light, handsome boy front and center is Tally. The next, as you move right, is Finn, and the last dog on the right is Gus. 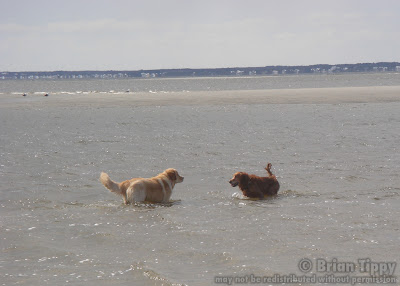 Tally and Gus aren't really facing off in the surf here. Finn led the charge out to chase some seagulls, and Tally and Gus followed and then played in the shallows. Goldens have truly amazing coats. The undercoat provides a kind of wet-suit effect, and the dogs can handle very, very cold water for quite a while with no problems.

The puppies, with their fuzzy coats, are a completely different story. They can't go in the cold water, and they definitely don't want to. 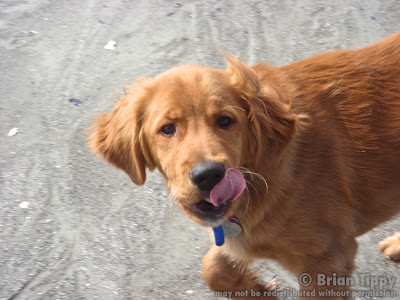 Comet did splash around a bit in the shallows, and having your nose constantly in the salt and sand requires a lot of licking to clean it off. Here, he's taking a two second break from exploration to check in and make sure he's a good boy. He has to check because, on a beach, he's told to drop something or other almost constantly (e.g., dead crabs, smelly shells, rocks, you name it). 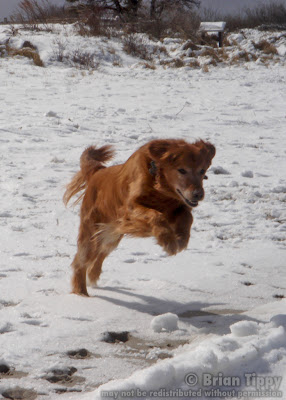 A beach also gives you lots of opportunities for great action shots. The dunes are covered in snow, and it's low tide so there's an expanse of sand to jump down to before the water. Gus had one of his trademark spiritual experiences for the whole walk. He ran down to the water, back across the sand with his nose down to hoover up the smells, up to the snow for a good roll, and back to begin again.

I'm glad he turned out so athletic; I don't know he'd keep up with his own joy otherwise. 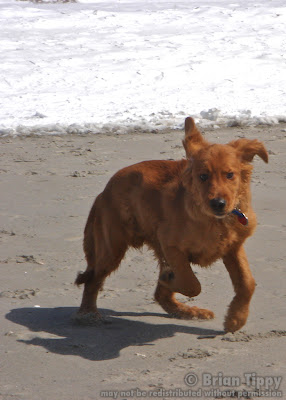 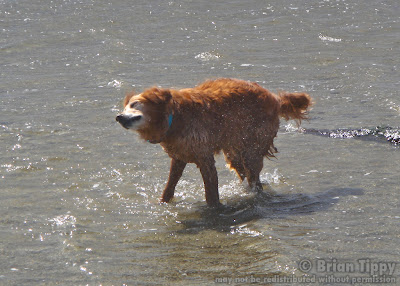 Finn, of course, lives with similar gusto (the joy's in the genes, remember?). I caught him in the middle of a rather enthusiastic post-chase shake. 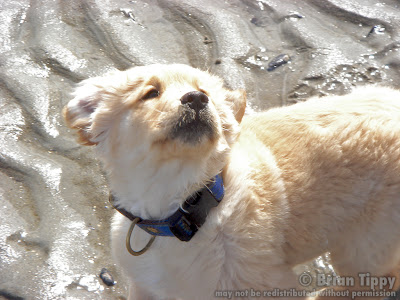 This is Tango, the newest addition to Jill's dog family. She comes from some intelligent, agile, champion stock, and you can already see it in her movement and in her looks. She's a beautiful, cute-as-hell, fluffball Golden, but the joy in watching her goes far beyond her cuteness. 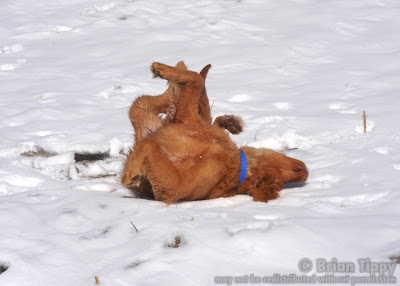 Not to be outdone in cuteness, Comet got his share of rolling in. The beach really did provide the three ideal zones of a dog paradise: a rolling zone, a smelly zone, and a swimming zone. 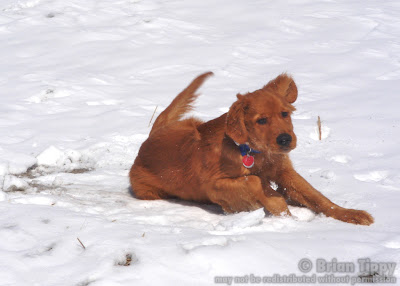 There's no time to waste. Once the roll's over, you have to rush back to the smells. No indolence, no pause, and certainly no resting. 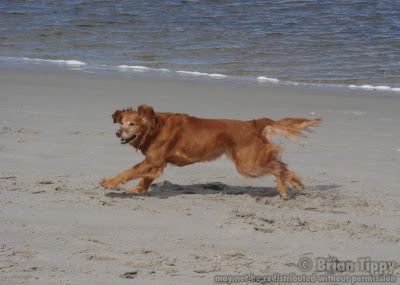 Gus, of course, is the one who taught Comet that rule of enjoying a walk, or he at least knew it first. The closest Gus came to resting during our hour at the beach was begging for treats from Jill. It's a crucial, non-negotiable skill for a dog to come back when called. If they don't have it, they can't run off the leash and have all the fun of determining their own course across the beach or any other open space. How can you swim, smell, and roll if you have to be within twenty feet of a leash holder?

It's not too difficult to teach a retriever to come back to you: they're bred for recall. Still, an important part of that training is making the recall fun, and periodically rewarding it helps to ingrain it. The treats were brought along primarily to help Tango learn, but the other dogs got a couple too. 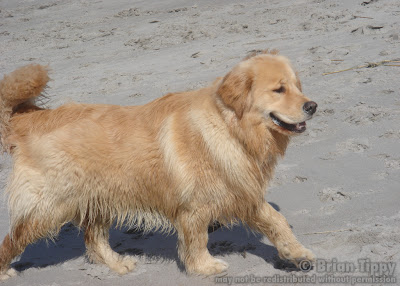 Tally comes from showdog stock, so he's a pretty different retriever in terms of his build and coat. Of course, he loves the sand, surf, and snow as much as the rest of them. He does have his own, particular brand of handsomeness, though. 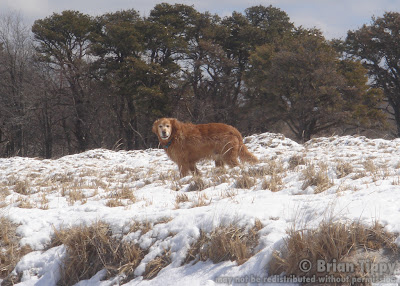 Finn, like his brother, takes a good picture. According to Jill, he likes to go up to the dunes to check on colonies of moles. I'm not sure the moles are all that enthusiastic about it, but Finn certainly loves to smell around those dunes. Once the plover nesting season starts, they're off limits, but the moles can certainly handle a little doggy inspection.

We're already on the way back to the car when this was taken, and then we headed back to Jill's to relax a bit. We were only out for an hour, but it was biting cold and windy, so that's all we humans could handle. The dogs would have stayed for the day, especially the dogs with the grown up fur coats.