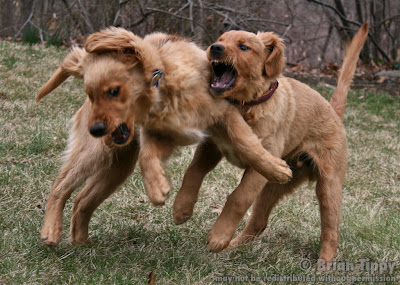 Just a week after Ajax survived his epic trek with us from Maine to Connecticut, he huddled in the back of the Jeep with just me to head down to New Jersey for a couple of days to attend our nephew’s christening. That meant that Ajax got a chance to meet back up with his beloved blue-collared brother, Ojo, for a little playtime. 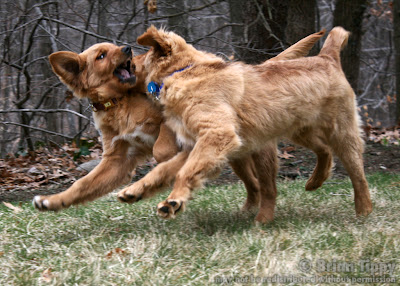 The funny thing about puppy play, which is generally adorable, is that when you freeze it with a camera’s shutter, you realize you’ve captured some kind of  primordial wolf behavior. Your otherwise mild-mannered, adorable Golden Retriever puppy seems to have traded in the familiaris in his scientific name for an extra lupus. You’ve got a fuzzy timber wolf in a collar. 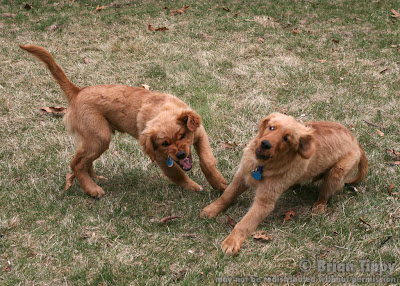 Ajax had the particularly crazy wolf face, and though Ojo really did give as good as he got overall, there are a couple of pictures in which Ajax’s game face seems to have intimidated him just a little bit. 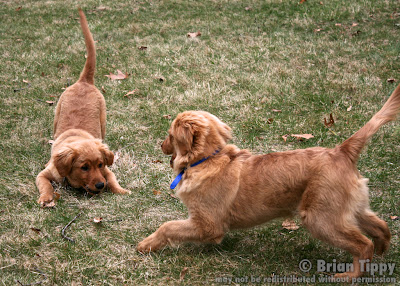 If the first three pictures call into question my claim that this is indeed play-fighting, I offer up this evidence. Ajax’s posture, with his head down, butt in the air, and tail wagging away, communicates an invitation for fun, not for a fight.

To their credit, the dogs played for a good hour like this and neither got carried away. At no point was there so much as a yelp or any other reason to do anything but let them enjoy themselves together.

The reason they’re this good at restraining their biting so as not to cause pain or damage is that they spent so long with their littermates and with adult dogs at the breeder’s. Being around other dogs at that young age really helps them learn how much is too much and how much is just plain fun. 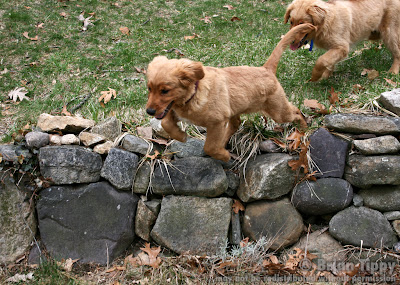 It wasn’t all fighting. There were plenty of opportunities to explore the yard and to engage in games of chase. After a few cautious trips up and down a lower section of this wall, Ajax grew more and more adventurous, until he was making flying leaps. We’re starting to see that fledgling athleticism that makes these dogs so beautiful. 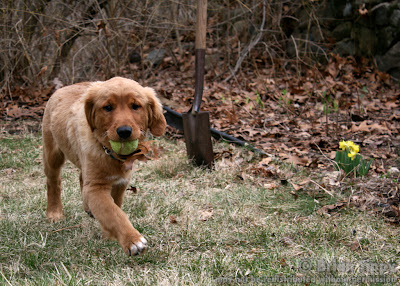 There were also lots of opportunities to fetch a ball (and apparently an incidental oak leaf) and for Ajax to show off both his flashy toes and his flashy gait. He really is put together beautifully, so his motion is a pleasure just to watch.

We took Ajax with full awareness that his chest patch and white toes constitute significant faults in terms of his conformation to breed standard. He is, however, a full-blooded, registered Golden Retriever, so he’s eligible for any AKC competition. Since we have no plans for showing dogs in the conformation ring, his attitude and physical soundness were what truly mattered. And, frankly, I wouldn’t take away the blaze or the white on the toes even if I could. Incidentally, a good bath revealed that the chest blaze is almost a perfect π (pi) symbol. How’s that for a dog that made me think of circles and cycles from the very first moment he entered our lives?

And, of course, not all playing has to involve slavering gladiatorial tooth-clashing. Fortunately, there were two balls. Both dogs fetch beautifully, and both love parading around proudly with their prizes.

By the end of this weekend, when Kate and Ty and Ojo finally went back to Boston, Ajax just crashed on the floor for a couple of hours, completely exhausted and happy to have seen his brother again. It’s nice to think that our family get-togethers will give these puppies a chance to get together too.
Posted by Brian at 3:00 PM