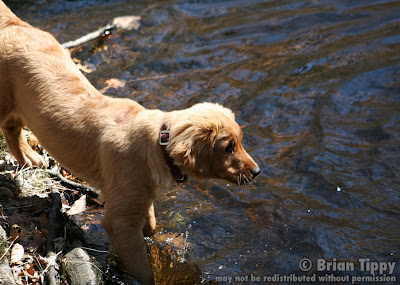 Another trip to another woods gave Ajax another opportunity to take his chances in the water. This time it was a calm stretch of a small river, and once again he watched Comet enjoy himself a bit and spent some time at the water’s edge.

It didn’t take long, though, for him to try to really go in after Comet. Once again, though, he was a little unnerved about the idea of not having his paws touch the bottom. His look over after he realizes his mistake and has backed up just a bit to solid ground is simply priceless. 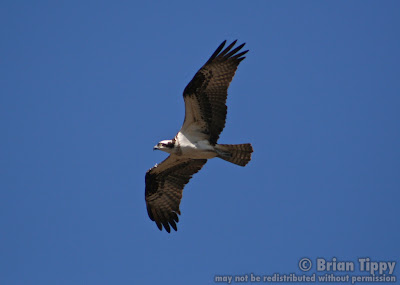 After the dogs had a swim and we had walked for about an hour, we got back in the car and went down to the shoreline marshes. We were rewarded with the sight of four osprey circling, fishing, and engaging in freewheeling aerial battles of intimidation as they competed for the best soaring space. 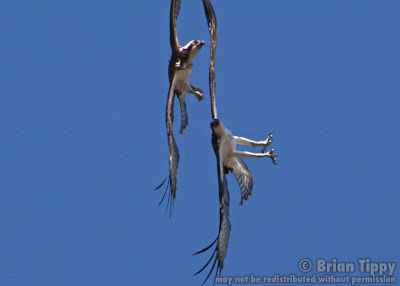 Unfortunately, the best action pictures weren’t the crispest, best focused, or best framed. Shooting Osprey battling on the wing isn’t the easiest thing, and I simply don’t have the experience and practice yet to do it truly well. But for twenty minutes of shooting, these aren’t that bad. 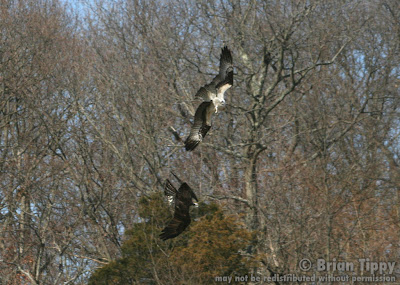 The pictures don’t quite tell the whole story of the piping calls they screamed at one another as they sought the advantage of height over one another and swooped and bombed together. There didn’t seem to be any actual contact; rather, they seemed to be posturing in order to avoid an all out aerial fight that could injure both birds. 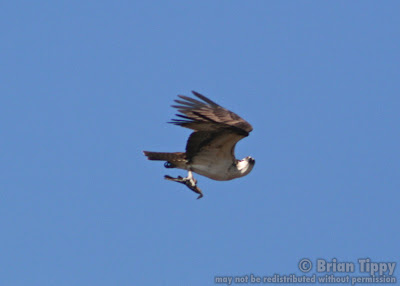 I even got a picture of one of them fishing. I’m guessing by the size and the lighter chest band that it’s a male. He dropped this fish off on a nest, which leads me to think they must have chicks, though we couldn’t see anything in the nest from where we were. 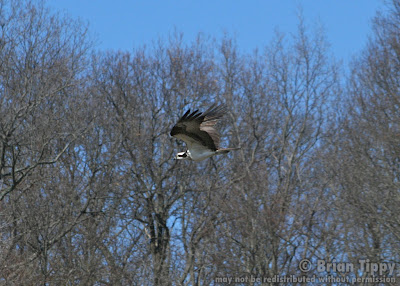 It’s an amazing thing to see a bird that big in flight with wings like planks and those dramatic yellow eyes. I’m not quite sure what it is that kept us watching them so intently for so long. The dogs certainly thought we were crazy, though they did enjoy basking in the sun with us, since they were a bit tired from their hi-jinx earlier.

But there was something just amazing about those big birds soaring, wheeling, and piping their high calls in the cool air.
Posted by Brian at 2:00 PM