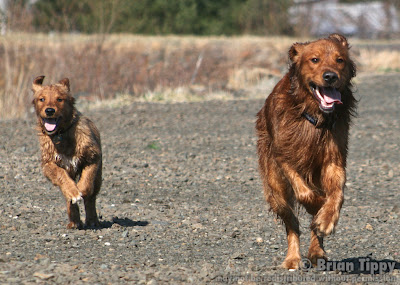 Ajax has been taking beautifully to walks in the woods. He still has some apprehension about driving in the car, but he’s not having any substantial anxiety or carsickness, so these short drives to fun places should make him a car-loving convert like his buddy Comet. He starts puppy class on April 13th, so that should bring him to around four super-fun car excursions a week.

We’ve been trying to take him out for exercise as much as possible, since it tuckers him out and makes him a significantly better student for training sessions. Not to mention the fact that it’s also simply fun and soul-healing to have two dogs in the woods again. 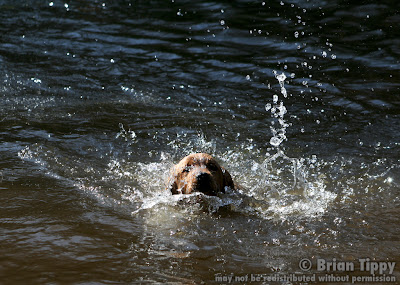 You may have noticed that the two running dogs in the last picture were more than a little damp.

Well, Ajax also got his first swim today. Comet went charging in the lake just to float and lap at the water, and Jax decided to follow him in. He was a little carelessly brave, though, and leapt right past his depth and suddenly found himself swimming. He was a little nonplussed and splashed his way back to shore with a fresh resolve to treat lakes a little more cautiously in the future. 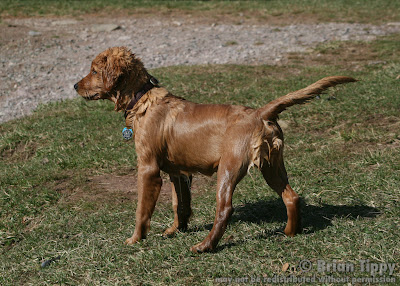 A little caution, of course, didn’t prevent him from rather intensely watching Comet fetch a stick, and he ran in and out of the shallows just like a dog who was only a few more tries away from learning to swim like a pro. 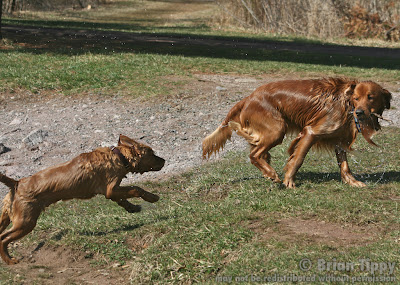 Of course, once Comet came out of the water, he was fair game for a good chase. They were whipping water around pretty fiercely during their game, so it was a good thing I had the telephoto on the camera and could snap pictures from a safe distance. 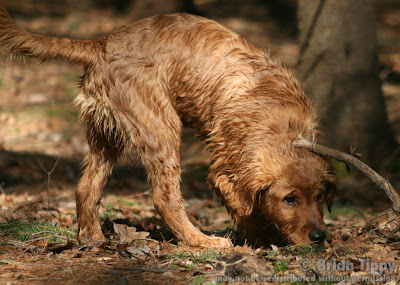 Of course, once swimming time was over, they ran through the woods, rolling in pine needles and sniffing out the most intriguing smells they could find. I love the smell of pine needles baking, dusty in the sun, and I can smell leaf mold as a warm, dark brown undertone to it. But to be able to separate out each individual thread of scent to be considered and savored separately, as a dog can and so happily does, would be a powerful thing, I think.

I imagine it’s similar to my experience listening to a big band. I can sit back and enjoy the whole wash of sound at once, or I can train my ears to pick the alto saxophone out of the mix so I can consider it separately and in contrast to the rest. I can even try to pick out that one trumpeter who’s a little more brassy than the others.

Imagine being able to do that with even a square foot of a forest. 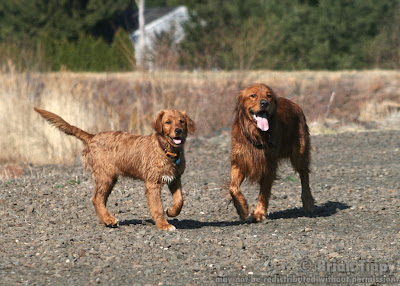 Even a whole walk around the lake after they swam in it wasn’t quite enough to dry them out. I don’t think I have the heart to clipper the dogs anymore, so we’ll have to just deal with long drying times.

I’ve heard that cutting the coat too short can interfere with heat regulation, but the real reason I may forgo it this year is that Comet has developed such a beautiful, shiny copper coat. It feels like a crime to take too much of it off. Jax won’t have enough to matter for a few more months, but he seems likely to darken significantly and to develop a wavy, lower maintenance coat anyway.

I haven’t ruled out a trip to a proper groomer to clean them up a little, but with such gorgeous boys, you can’t fault me for a little vanity about their haircuts. If it means wet dog smell in the house for a little longer after a swim, well I just can’t bring myself to mind.
Posted by Brian at 4:00 PM