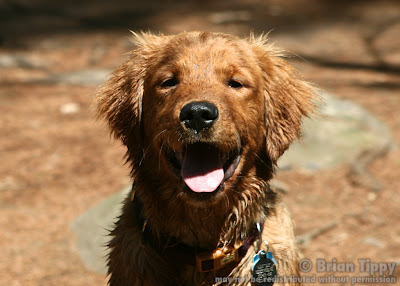 I’m a bit delayed in posting these pictures, taken not long after my last post (hence the date), but posted almost a month later. As the end of the school year winds down, sorting through pictures and ruminating take a bit of a back seat to grading papers.

Ajax went from a hesitant swimmer, to an enthusiastic one, to an absolute water addict. A couple of our favorite walks circle lakes, and he’ll now break from the trail at every glint of water for the opportunity to splash in at new places.

His obedience is coming along well too, as he demonstrates with a “stay” in this picture so I can back up and snap a few headshots with the telephoto. He’s a heavy-lidded guy in all lighting, but he puts on an adorable squint when he has to look into the sun. 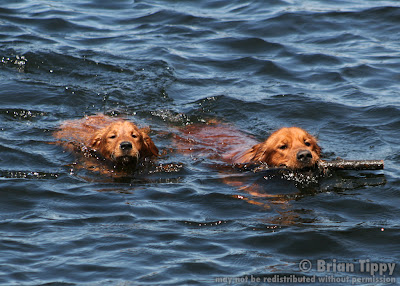 He doesn’t quite have the speed Comet does in the water (yet), so he hasn’t been winning the chase for the stick. Still, he’s been inching closer and closer as time goes on, so Comet may soon find himself on the short end of that particular...sorry. I caught myself before I finished that atrocious pun. 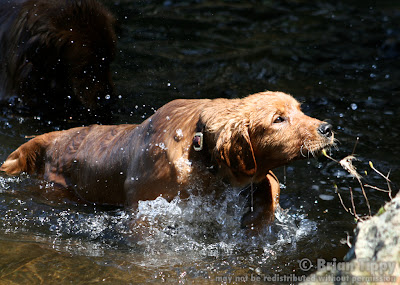 Ajax focuses on any possibility of gaining the advantage in a game of fetch. He’s almost explosive in the water sometimes. As high energy as Comet is, and as dedicated to working and fetching as he is, I think Ajax may turn out to be a more intense competitor.

I appreciate both boys for their own natures. Comet’s more laid-back, fun-loving joie de vivre is infectious, and Jax’s developing intensity is impressive and enviable.