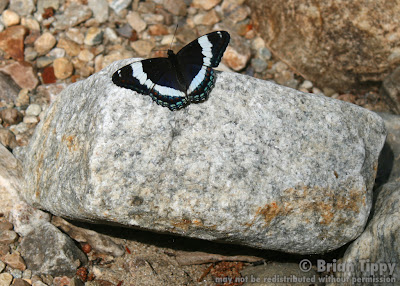 Ajax and I went on a little bushwhack today, out into the Bread Loaf wilderness and the upper South Branch of the Middlebury River.

We left the trodden trail and walked along the river’s edge, down on the sandy bank where possible, and where the bank was too steep, we cut up on the deer runs that parallel the river.

Early on, Ajax startled up a profusion of butterflies on a rocky shoal, and suddenly there were wings everywhere, all around us, in that quiet cathedral with nothing but the tall, damp pines stretching up and the clear river rushing.

It was a Sunday, after all, and good dogs go to church. 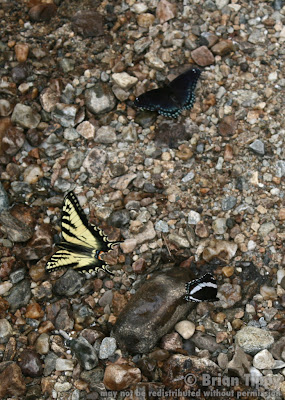 The butterflies settled back down amicably enough, almost as if they weren’t much bothered by an exuberant young dog. Their thirst for the startlingly clear waters of the river seemed to win out over any apprehension about a puppy’s paws, though by this time he had run and swum his way down the river a little ways, perhaps in search of a few trout or of a Solitary Sandpiper.

The butterfly on the left is a Canadian Tiger Swallowtail. The one lowest in the picture is the same species as the picture above, a White Admiral.

The top butterfly is the same species as the White Admiral, but there are subspecies that may or may not provide useful categories. He’s a Red-spotted Purple or some hybrid of subspecies.

Interestingly enough, the White Admiral and the Red-spotted Purple are dramatically different in color, so they do look like two species, but structurally, in terms of their size and wing shape, they’re identical. 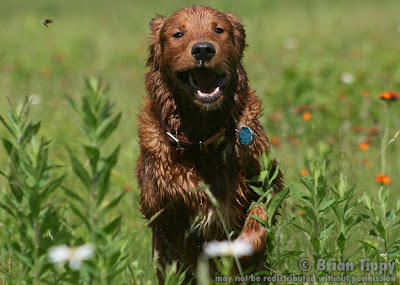 Ajax certainly didn’t care too much about species as he romped around a meadow we found in our travels, only halfheartedly trying to catch the fleeing butterflies.

I’m surprised he didn’t inhale one, running around with his mouth open, full of wind. You can even see a butterfly making its escape stage right.

I think Jax was far more interested in scaring up another flock of turkeys, since upon our arrival in the meadow, a mother turkey ponderously exploded out from the tall grass, followed by about a dozen recently-fledged turkeylings the size of crows. It was a shockingly prehistoric moment as they all took flight.

Alas, as I was completely unprepared for pterodactylic utterances from the grass, I did not have the camera out. 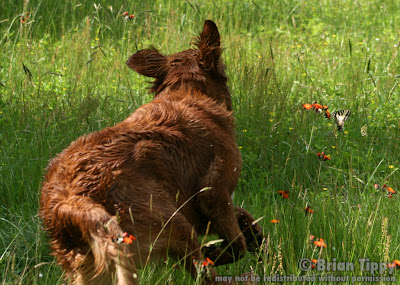 The photographic evidence demonstrates that if Jax were interested in a big mouthful of Swallowtail, he could have had it. The butterfly in this picture has had no chance to even let go of his flower, and Jax is already halfway past him. 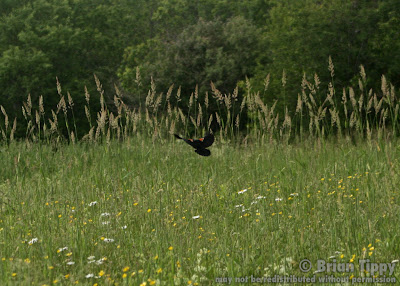 Birds abound in the Vermont mountain meadows. Here, a Red-winged Blackbird heads in for a landing on some grass after swooping over our heads, chiding us, presumably for straying too close to its nest in the grass. 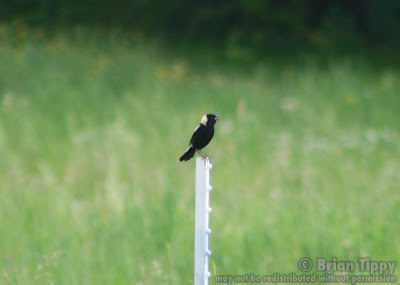 Though the picture quality isn’t stellar, I thought it important to include this photo of a male Bobolink, a rarer bird, though one increasingly more common in Vermont fields due to some protection efforts. Currently, hay farmers can receive a per-acre payment for haying a little on the early side and then leaving the field fallow a little longer than normal. This minor change in the typical haying cycle allows the Bobolink to raise its offspring uninterrupted. 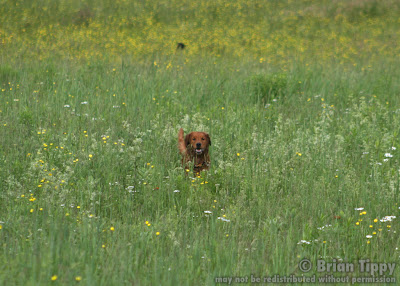 At home in a river of clear water or in a sea of leaves of grass, Jax is a great dog for hunting upland birds. Of course, we don’t shoot them in the more traditional sense, and he never retrieves anything I’ve shot. Think of it more like a catch and release system for the birds.

Together we catch just that one moment of flight or that brief stillness on a perch. Like butterflies, we uncurl our tongues and take a brief, lepidopterous sip at the water’s edge, and then we let time resume its flight downstream.
Posted by Brian at 4:00 PM