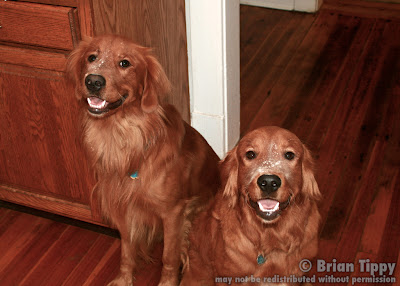 Andy made Chicken Piccata last night and the dogs, who usually have to wait outside the kitchen doorway, were not subject to our typically strict enforcement.

As he dredged the chicken to the dogs rapt attention, he flicked some flour into their eager faces. I thought the results were so adorable that I went and grabbed the camera.

I find photographing the dogs indoors at night to be nigh-impossible, since the flash always makes their coats look strange and results in incredible eye glare. For this picture, I held a single layer of paper towel over the flash. The results were a bit red and required a little post-processing to get rid of the remaining eye glare, but the moment was certainly captured with its silliness intact. 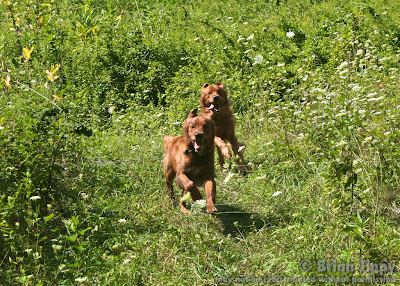 The next morning, we headed out for a hike in one of our favorite places, and the sunshine made some crisper, better-colored pictures possible. The dogs take to the grassy trails with even more gusto than they stare at raw chicken.

The goofy anticipation in the last photo is replaced by a goofy joy in coming back to a beloved whistle that has always meant affection and occasionally means cookies. 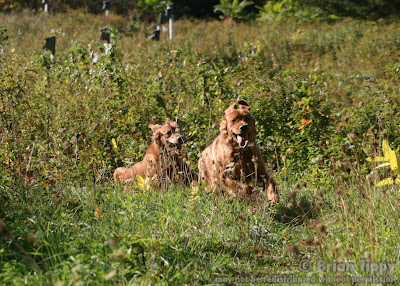 I knew I had taken a photo at a spot that had also given me one of my favorite pictures of Gus and Comet together. I liked this photo a great deal when I originally posted it back in October. What I didn’t realize, though, was how deeply I would be struck by the similarity of the actual photos.

This is from last October, only two months before Gus died. We had no idea, of course, what was about to happen, and even though Gus is gone, I can see him in Comet, the dog he helped train, and in Ajax, the dog who shares more of his genes.

The continuum of Gus’s life is both broken and unbroken, just as he is gone and is right here in the grass, running beside his brothers, always just around the corner but ready to race back to me the moment I whistle up a memory.