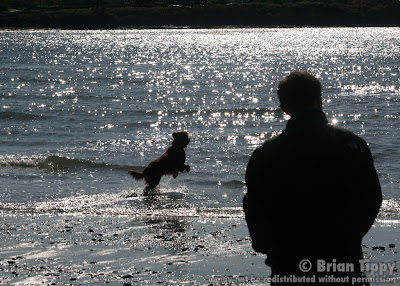 A month after our last trip to Maine, we found ourselves there again, this time visiting our friend Jill and her dogs, Tally and Finn. We visited Jill a year and a half ago, and we enjoyed a frigid walk then.

The weather and cast of characters was different this time, though. Tango, who was a puppy then, was off visiting a friend of Jill’s for the weekend, and Gus, who made so much of his first walk on this beach, couldn’t be there either. And, of course, Jax made his beach debut.

Comet was just a puppy last time, and his coat wasn’t up to the frigid March water. Today, though, was surprisingly temperate, though Comet’s grownup coat would have handled just about any temperature. 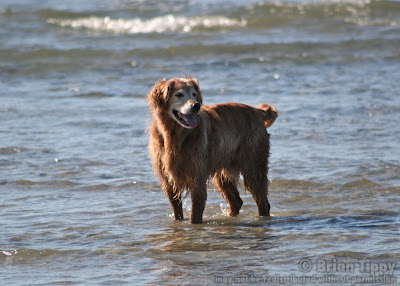 Finn is Gus’s brother, and he’s just a few days shy of his seventh birthday, despite his white face. When you see him still, he looks like a healthy dog of some years. 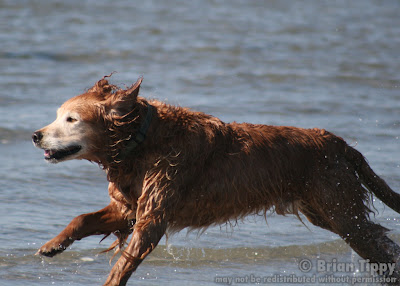 When you see him in motion, though, he’s a lean young dog who has just come into his full strength, a wave crasher and a bird chaser, a streak across the water’s glitter.

When I see Finn move, I consider, for a moment, giving into a fierce jealousy that I can’t have my friend back on this beach on this day, on this perfect border between sand, sea, and sky. But joy crowds out jealousy, and no green eyed monster can compete with the simple pleasure of running vicariously through the waves with an amber eyed dog.

I cradled Finn as a puppy; I helped gently teach him to keep all four paws on the ground during a greeting, to choose a toy to chew instead of a hand, and now he’s a young old man jumping from the top of one wave to the next. 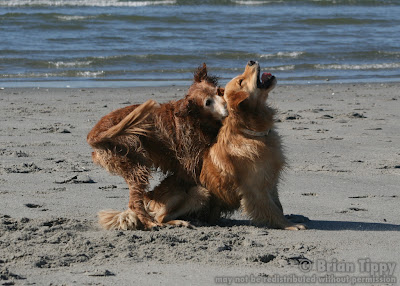 Finn plays like a puppy too. Tally, another of Jill’s dogs, is much younger, but when you see the two of them romp, you really can’t tell. Tally is, of course, not howling in pain here, but rather trying to swing his head around to playbite Finn back. 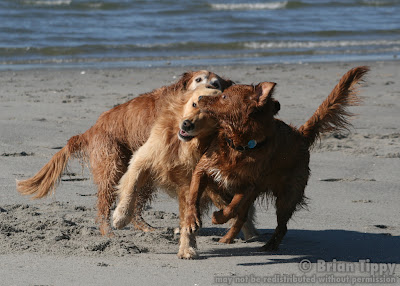 It didn’t take long for Jax to interject himself into this playfight, and soon it was sand flying, teeth flashing, and the full range of Golden colors all wet and dirty in the sun.
Posted by Brian at 12:00 PM