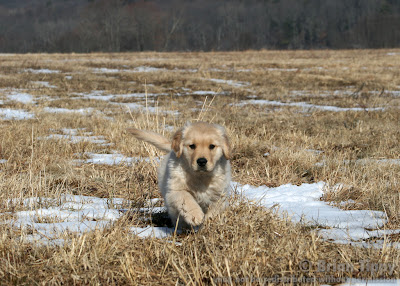 Our friend Jill has just welcomed a new addition to her family of dogs. This young sprite goes by the name of Copley (Chantilly’s Bright Lights Big City). If you’re having trouble pronouncing that in your mind’s ear, as I initially did, it’s cop as in officer, not cope as in deal-with-difficulties.

We got a chance to meet him when Jill came down to West Thompson Lake and all three humans and five dogs went for a walk. 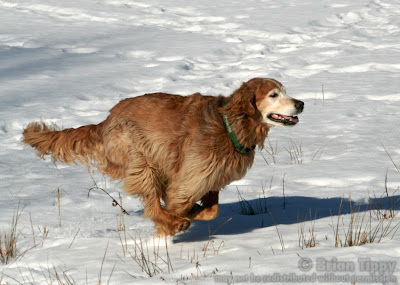 Of course, Finn, our old friend, was along for the ride. The contrast between his white face and his youthful gait defines nearly every picture of him, and here that contrast is startlingly evident.

He’s in a full gallop, with only one foot touching the ground, yet he’s totally level, smooth, and almost relaxed. Even in middle age, Finn just glides around like he’s not quite subject to gravity or time. 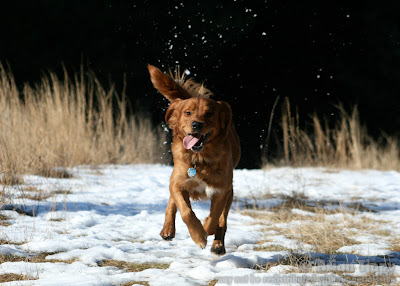 Jax, despite sharing plenty of DNA with his uncle, hasn’t yet developed that elegance and efficiency. He’s still a galloping, snow-spraying, discombobulated, utterly joyful mess, especially when he’s coming in on a recall, which we teach as a fun game that’s reinforced with affection, sporadic food rewards, and occasionally a race with one of the humans.

That sense of impending fun makes his gait on the recall a little more exuberant and a lot less elegant than when he’s simply moving around from smell to smell. 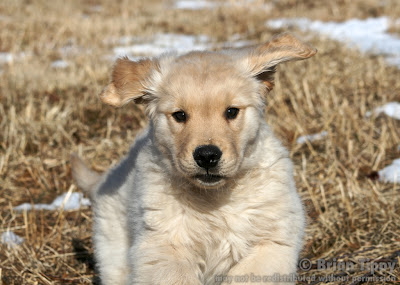 Despite being an extremely mellow guy, Copley can romp with the big dogs. He’s remarkably unflappable, even for a Golden puppy, and he’s put together very, very well. Since he’s so young, we carried him for much of the walk, but he did get the occasional opportunity to sniff around and play with the other dogs.

I titled the entry “Good Copley, Bad Copley” solely because of my love for terrible puns. Copley himself was a very, very good dog for the entire walk, except for a quickly interrupted attempt to carry a rock around. 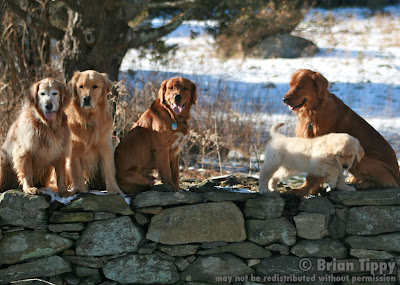 At the end of the walk, there’s an old stone wall that Jill often poses the dogs on. We got the four older dogs up there, and Andy put Copley on the wall and ducked behind it. Copley wasn’t the slightest big cooperative about posing, but we did get a five-dog portrait of sorts.