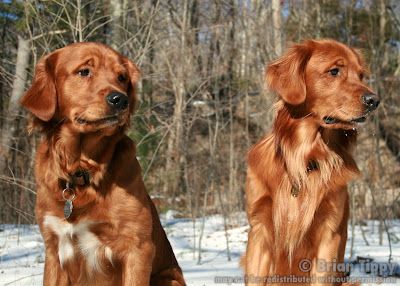 As we close the book on 2009, so begins a season of snow walks and races to catch the few minutes of each day. Though I don’t like driving to work in the predawn darkness, I don’t mind so much getting out early enough to rush to a favorite place to catch the last hour of day, even in the heart of winter.

In January, the days are just that long, and I’m thankful for both those minutes and a pair of lusty companions to share them with.

I’m also glad not to have to work on Sundays, so we can really take the measure of a couple of hours slowly strolling through the snowy woods.

The dogs had to be actively paused here, at the beginning of our walk, and even as obedient as they are, their attention is down the trail, not on me. 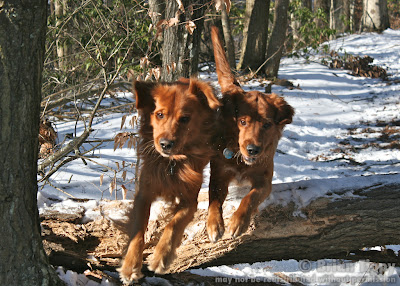 While I generally prefer hiking with Andy instead of just with the dogs, having no other humans around does allow me to indulge my appetite for staged photographs. The dogs got to practice their sit-stays while I trudged back up the trail a few times and set up the camera before calling them.

I’ve really wanted a tandem shot of the two of them in the air, and they obliged me pretty well here. I could ask for better lighting, but that would go against my whole sense of gratitude, wouldn’t it? 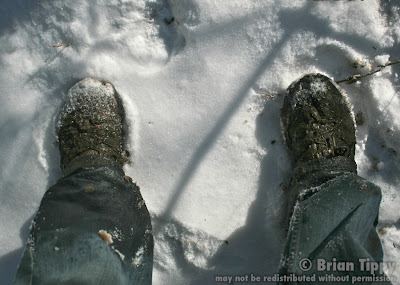 This photo requires some degree of explanation. There’s a long trail I like to do on a lazy day, and it winds through the back of the park area to some less-traveled-by trails and a spectacular gorge with a small stream at the bottom. The trail winds down the side of the gorge and runs alongside the stream until the gorge itself ends.

It’s a lovely walk, if a little muddy. Today, however, the stream was fairly high, and I realized if I took the dogs down it, they’d walk in the water, which would cause the snow to freeze into ice balls between their pads, which is very uncomfortable for them.

So, I decided to cut the corner of the trail and walk along the edge of the gorge instead of along the bottom.

Unfortunately, at the end of the gorge, there’s a swamp. The marked trail crosses the stream before the swamp, but we ended up on the wrong side. The dogs happily padded over the snow, but when big ol’ me walked out, my left foot broke through right in the middle and I was standing about shin-deep in cold mud. As I pushed my right foot down in order to extricate myself, it too broke through and got, shall we say, a little muddy.

While my shoes are goretexed, they’re not magic, and I was not wearing the proper socks for a moment like this.

Fortunately, the day wasn’t all that cold, so my feet managed to stay wet instead of frozen for the last mile or two. The shoes had to be washed with dish soap when we got home. 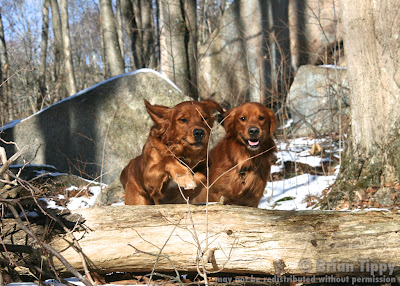 Still, muddy feet aside, heck, muddy feet included, it was a pretty glorious day to be a dog or a person.