Your Face Will Stick That Way 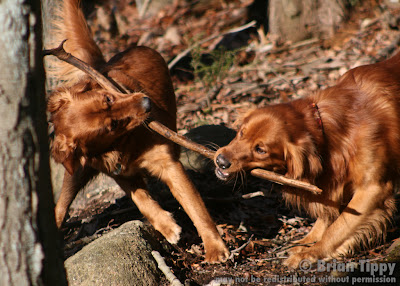 My friend Ben and I went for a quick walk in the woods today, and I decided to dedicate an entry entirely to the silly faces and antics caused by the dogs’ interest in sticks as things to carry, chew, and play keep-away with.

The inevitable tug-o-war sometimes creates some impressive contortions, particularly on Jax’s part. He appears to have three legs, a tail that’s attached in the wrong place, and a head mounted on some loose ball bearings. 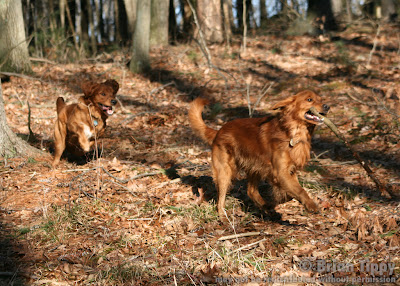 One of Comet’s great pleasures in life is to be chased. He’s happy to be chased around the kitchen table by us or raced down the path by any human looking to be put to shame, and he even taught our niece, then five, how to play tag (so long as she was willing to be “it” permanently).

The new maturity of Jax, however, has put a whole new dimension to this passion, and given the opportunity, the two of them will run in circles in the woods. Sometimes Comet needs to shake a stick in Jax’s face to get him going; sometimes Jax just plays for the sheer joy of biting Comet’s butt when he catches him. 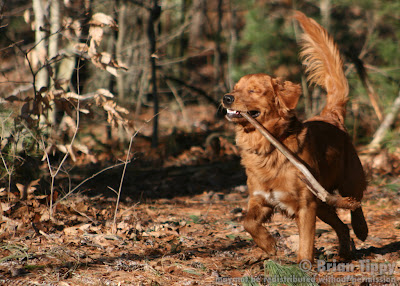 Then, of course, there’s the absolute panoply of silly faces that a good stick can bring out of a good dog. I realize it’s anthropomorphic to say a dog is “proud” of his stick, but I really have no better way to explain it. He prances, tail high, and is clearly immensely satisfied with his stick. What else would you call it? 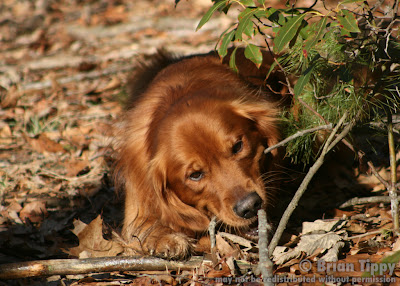 Of course, Jax isn’t the only one who can look goofy and satisfied with a stick. After a certain amount of chasing, it’s time to work out that mouthy urge on nature’s perfect chew toy.

As someone who has spent $28 on a really great indoor chew toy, I’m not at all resentful that the dogs like sticks at least as much. I’m actually very happy there’s something totally ubiquitous for them to chew on outside, and I don’t have to stress out if they drop it somewhere on the trail and leave it behind.

Comet will often grab a stick, run ahead on the trail, and if Jax isn’t chasing him, plop down facing back towards us and chew on it until we catch up. Yes, the dogs are that much faster than we are.
Posted by Brian at 4:40 PM