“Something there is that doesn't love a wall,
That sends the frozen-ground-swell under it
And spills the upper boulder in the sun,
And makes gaps even two can pass abreast.” 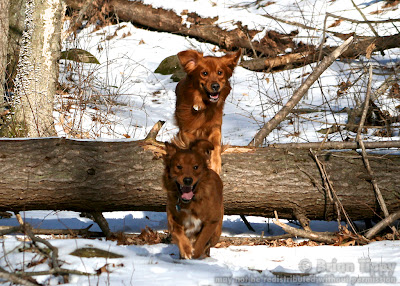 Maybe there is something that doesn’t love a wall, but I can name two things that do, and who “like to get away from earth awhile / And then come back to it and begin over.”

Sometimes the chainsaw man comes, and like something that doesn’t love a log, he cuts out a section and rolls it to the side of the trail. Frost didn’t coin the phrase “good fences make good neighbors,” though it appears twice in “Mending Wall” as he and his neighbor put the stones back in place. 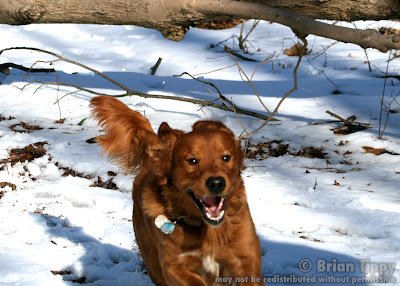 Good logs make good jumps, so sometimes I wish I could mend the sawn logs, but there’s no real need, since nature brings down enough trees on her own, and there’s always a new place to take these pictures.

I don’t know any other creature who would be so patient with me as I send him out over the logs again and again so I can take a picture as he comes back. Looking at that picture again, I realize that patient isn’t the word at all, is it? Jax doesn’t play this game patiently. He loves it.

Each return is nearly as joyful as the last, though there is a small diminishment on each return that makes me stop the game by the fifth or sixth time, to move on to the next log or wall, where the going out and coming back have fresh appeal for all of us. 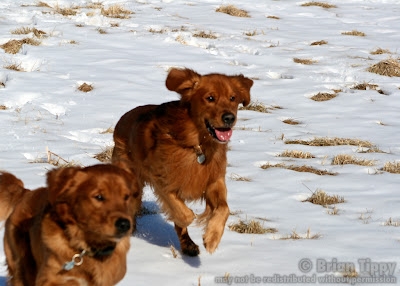 “Oh, just another kind of outdoor game, /
One on a side. It comes to little more,” says the poem.

Not for the first time, I’m envious of the purity of the dogs’ enjoyment of these outside spaces, with their thin covering of the last snow of the season. Every new direction is a sprint; every new smell is a whole story of seasons and deer, and people passing by.

How odd I must seem to the dogs, plodding along the trail, one step at a time, never sprinting off to smell a tree or to romp in zoomed circles for no reason at all.

I just hold a big shiny dead black bug to my face and go click, click, click, and then I plod some more. Each to our own little outdoor games, I suppose. 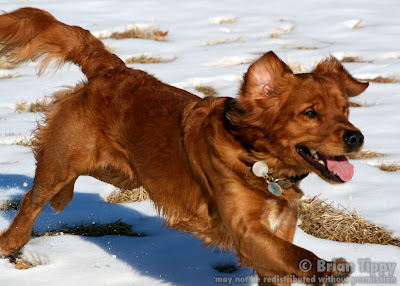 Where is Jax going right at this moment, and why doesn’t it matter to him? He might have finished running over to a friend, made a sudden inexplicable turn to the left, or wheeled back around to chase his own steps. I don’t remember what he did next, but I do remember that he did it with total enthusiasm and with no regard for the past or the future.